Identifying potential adverse effects using the web: a new approach to medical Adrian Benton, BAa,*, Lyle Ungar, PhDc, Shawndra Hill, PhDb, Sean Hennessy, PharmD, PhDa, Jun Mao, MD, MSCEa, Annie Chung, BAa, Charles E. Leonard, PharmDa, John H. Holmes, a University of Pennsylvania School of Medicine, Philadelphia, PA b University of Pennsylvania, The Wharton School, Philadelphia, PA c University of Pennsylvania School of Engineering and Applied Science, Philadelphia, PA * Corresponding author, [email protected] (Adrian Benton)    University of Pennsylvania School of Medicine    Center for Clinical Epidemiology and Biostatistics    729 Blockley Hall    423 Guardian Drive    Philadelphia, PA 19104‐6021   Medical message boards are online resources where users with a particular condition exchange information, some of which they might not otherwise share with medical providers. Many of these boards contain many posts and contain patient opinions and experiences that would be potentially useful to clinicians and researchers. We present an approach that is able to collect a corpus of medical message board posts, de-identify the corpus, and extract information on potential adverse drug effects discussed by users. Using a corpus of posts to breast cancer message boards, we identified drug event pairs using co-occurrence statistics. We then compared the identified drug event pairs with adverse effects listed on the package labels of tamoxifen, anastrazole, exemestane, and letrozole. Of the pairs identified by our system, 75-80% were documented on the drug labels. Some pairs may represent previously unidentified Keywords: data mining; information extraction; medical message board; drug adverse 1. Introduction
It is well known that the lay public frequently uses online resources such as message boards to seek and exchange medical information [1-5]. Users of these resources ask questions and seek advice about topics that they may be hesitant to discuss with their health care providers. One such topic is concern about adverse effects experienced with some medications, especially those prescribed for serious conditions such as cancer, where patient anxiety may be heightened by the characteristics of the disease and the long-term exposure to potentially toxic drugs. Although adverse events should be reported through available channels, such as the Adverse Event Reporting System (AERS) of the U.S. Food and Drug Administration, many patients do not do so, perhaps because of ignorance of these channels, embarrassment, perceptions of poor provider availability, etc. Instead, they often use informal networks such as internet message boards to report and discuss adverse events. The burgeoning of medical message boards provides evidence of the frequency of discussions about health-related matters in society at large, and the boards in turn provide a fertile source of data for identifying and evaluating the advice, concerns, and opinions that are sought and provided by message board users. However, these data remain largely untapped by researchers in While there are several studies evaluating discussions in message boards and chat rooms, these have used qualitative research methods.[6-10] To date, there are no reports in the medical or social sciences literature that apply text mining methods to these discussions to identify and analyze reports of adverse drug events. Reasons for this include the unstructured nature of message board text, the use of nonstandard abbreviations, a wide variety in the use of syntax and spelling, the temporal relationship between posts in a single thread, and references within messages to other threads. Despite the difficulties associated with using message board text, researchers in many domains, particularly marketing, have successfully applied methods to extract information from this irregular medium. Glance, et al. [11] have developed a comprehensive system that crawls message boards and derives several different metrics about products including how much people discuss them and how much users seem to like those products. Feldman, et al. [12] have also published a system that extracts comparisons between different products and the attributes that they are compared on. Other systems have focused on different forms of web content such as product reviews in order to extract people’s sentiment about certain products [13;14] or have relied on the pages produced by Google searches to extract the reputation of a Medical message boards have been examined to a much lesser degree. Malouf, Davidson, and Sherman [16] applied sentiment analysis to epilepsy blogs in order to extract patient preferences for different seizure disorder drugs. Although not focused on online user-generated content, pharmacovigilance researchers have also applied data mining methods in order to extract signals of possible adverse drug events from databases such as the AERS [17-19]. Electronic health records have also been examined to identify similar signals [20] as well as to generate more general biomedical hypotheses [21]. Though there is a history of data mining in the medical domain, it has yet to exploit the knowledge that can be derived from online user-generated content. We present here methods that we used to identify such knowledge, specifically self- reported adverse events that may be associated with four hormonal medications that are commonly used in the treatment of breast cancer. 2. Methods
In order to address the unique difficulties posed by medical message boards, our system was structured as illustrated in Figure 1. 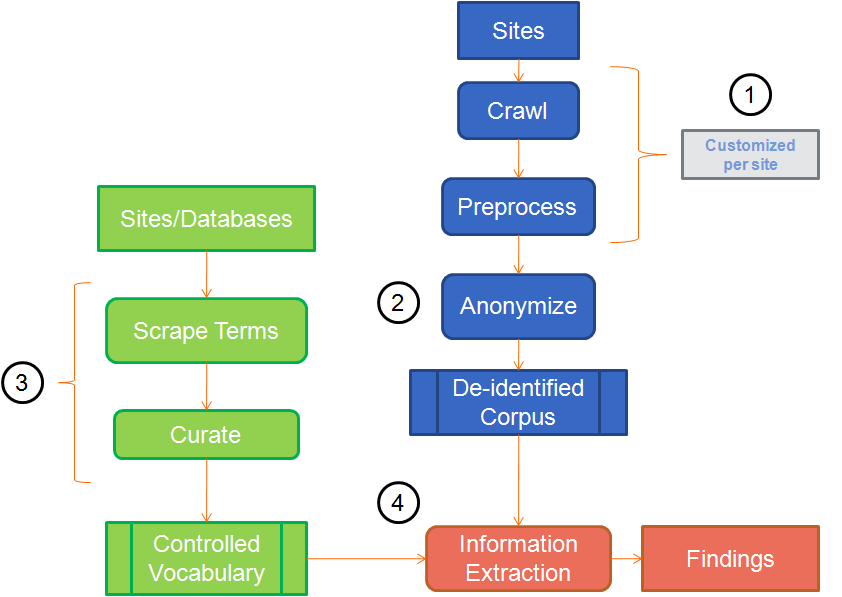 Electronic volume correctorwith integrated data loggerVolume correction including compressibility calculationData logging function with peak-load displayIntegration in remote data transfer systemsThe EK260 is a battery-operated volume corrector. It can be used with all gas me-ters such as diaphragm, turbine or rotary gas meters. As an alternative to recording the fl ow-proportional pulses for