Journal of Chemical Technology and Biotechnology J Chem Technol Biotechnol 78:431–436 (online: 2003) Effects of ethylene glycol on the synthesis
of ampicillin using immobilized penicillin G
acylase
Dong-Zhi Wei* and Liu Yang
State Key Laboratory of Bioreactor Engineering, Institute of Biochemistry, East China University of Science and Technology, Shanghai
200237, People’s Republic of China
Abstract: The effects of organic cosolvents on the synthesis of ampicillin from phenylglycine methylester (PGME) and 6-amino penicillanic acid (6-APA) using immobilized Bacillus megateriumpenicillin G acylase have been examined. Several cosolvents were tested for their influence on theenzyme in terms of enzyme stability and hydrophobicity. Among the cosolvents tested, ethylene glycolwas found to increase the yield of ampicillin by 39–50%. The effects of ethylene glycol on the pK of PGME, the hydrolysis of ampicillin and PGME, and synthetase/amidase and esterase/amidase ratioswere also studied. Experimental data indicated that ethylene glycol inhibited more the hydrolysis of theampicillin than the hydrolysis of the PGME and the synthetase/amidase ratio varied from 0.2 to 0.88when the concentration (v/v) of the cosolvent increased from 0 to 40%. The enhancement of thesynthesis yield was mainly caused by the reduction in the hydrolysis of acyl donor (PGME) and product(ampicillin) in the water–cosolvent system.
# 2003 Society of Chemical Industry Keywords: penicillin G acylase; ampicillin; ethylene glycol; enzymatic synthesis INTRODUCTION
catalyzed by penicillin G acylase. Therefore, preven- Ampicillin is a broad spectrum antibiotic and one of tion of the hydrolysis of the acyl donor substrate the most widely used b-lactam antibiotics. It is often (PGME) and product (ampicillin) is desirable for the used in combination with clavulanic acid, an inhibitor of the b-lactamase produced by microorganisms as a With this strategy, organic solvents have often been resistance mechanism to b-lactam antibiotic.1 Ampi- added to aqueous medium to suppress the enzymatic cillin can be produced by chemical synthesis, in which hydrolysis reactions. Usually, the effects of organic the protection of the a-amino group of phenylglycine solvents on yields do not change the equilibrium posi- (PG), the use of highly reactive derivatives of PG, low tion in an enzymatic reaction (experimental conditions temperature, anhydrous conditions, and the use of commonly are far from thermodynamically favorable highly toxic compounds (pyridine, dimethylaniline, ones).9–11 Rather, the solvents directly affect the and dichloromethane) are all required. Accordingly, enzyme’s catalytic properties, which depend dramati- the enzymatic synthesis approach becomes an attrac- cally on the tertiary structure of the enzyme. Small tive alternative to the production of ampicillin because conformational changes in enzyme structures may of its moderate operational conditions.
modify the shape of the active center and then affect Enzymatic synthesis of ampicillin has been achieved the catalytic properties of the enzyme.12,13 Thus with penicillin G acylase (EC 3.5.1.11; also known as organic solvents can reduce the production yield by penicillin amidase).2–8 Synthesis of b-lactam anti- inhibiting the catalytic activity of the enzyme or by biotics catalyzed by penicillin G acylase is usually demolishing the stability of the three-dimensional carried out by using a kinetically controlled strategy.
structure of the enzyme. Considering these two In kinetically controlled synthesis, it is necessary to opposing effects of organic solvents, a well-advised use an activated acyl donor (ester or amide). As shown design of the reaction medium is required to obtain a in Scheme 1, penicillin G acylase catalyzes not only the higher yield of the product in water–solvent mixtures.
synthesis of ampicillin (synthetase activity) but also the Some results have been reported about enzymatic hydrolytic reactions of PGME (esterase activity) and synthesis of b-lactam antibiotics in reaction media ampicillin (amidase activity). The yield of ampicillin other than pure aqueous solutions.4,5,11,14–23 In the depends on the three different kinetic processes presence of suitable organic solvents or additives, * Correspondence to: Dong-Zhi Wei, State Key Laboratory of Bioreactor Engineering, Institute of Biochemistry, East China University ofScience and Technology, Shanghai 200237, People’s Republic of ChinaE-mail: [email protected]/grant sponsor: Shanghai Key Discipline(Received 5 June 2002; revised version received 7 October 2002; accepted 11 October 2002) # 2003 Society of Chemical Industry. J Chem Technol Biotechnol 0268–2575/2003/$30.00 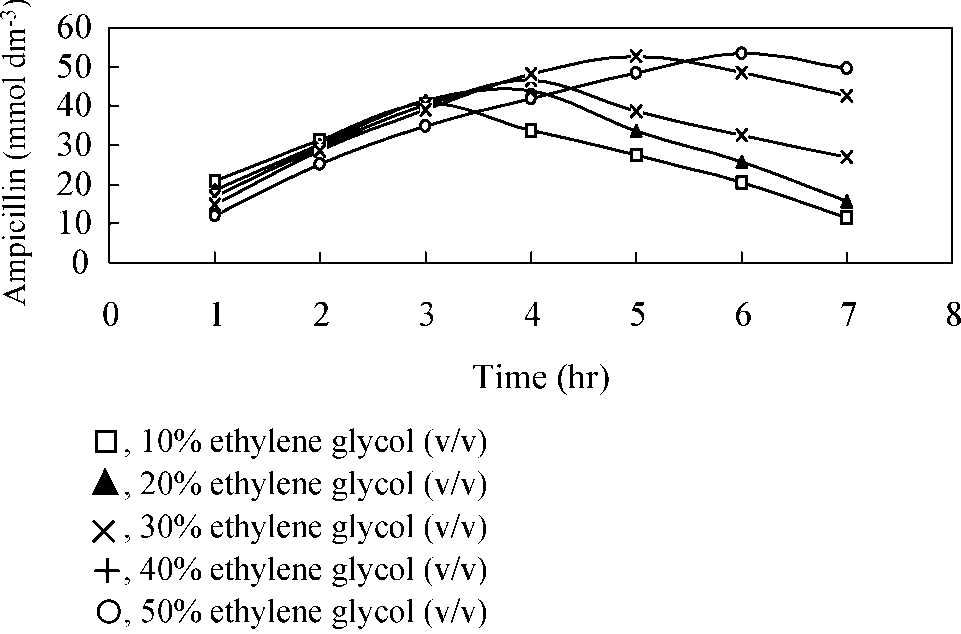 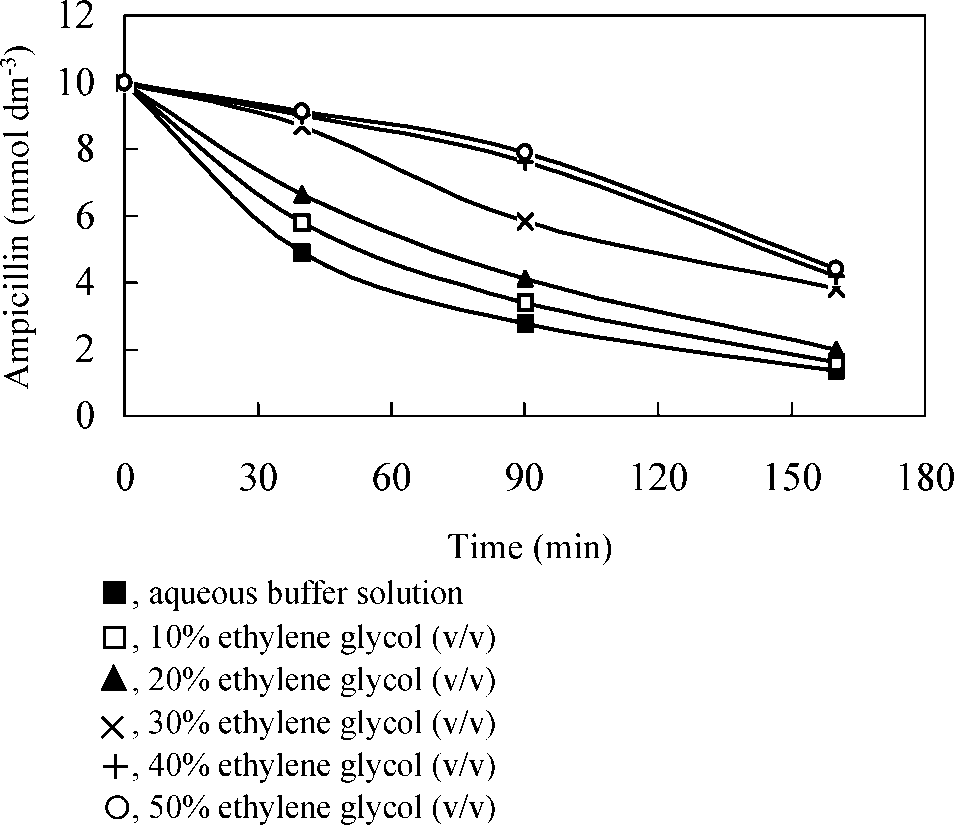 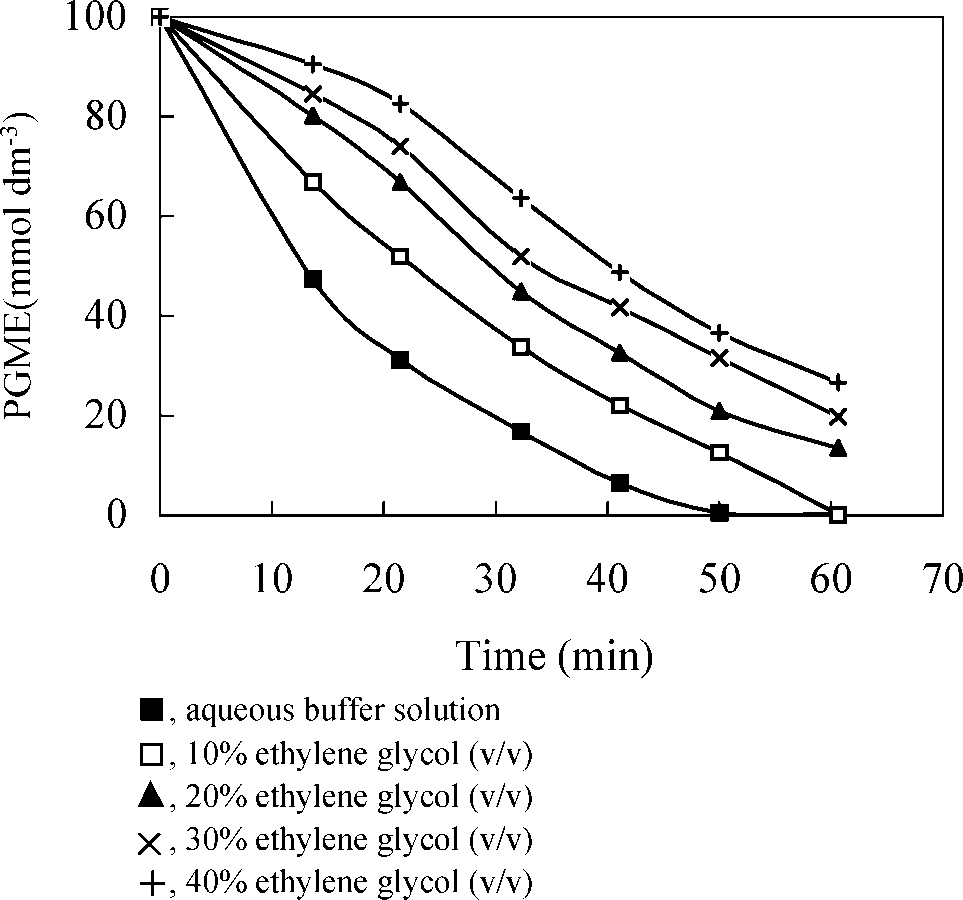 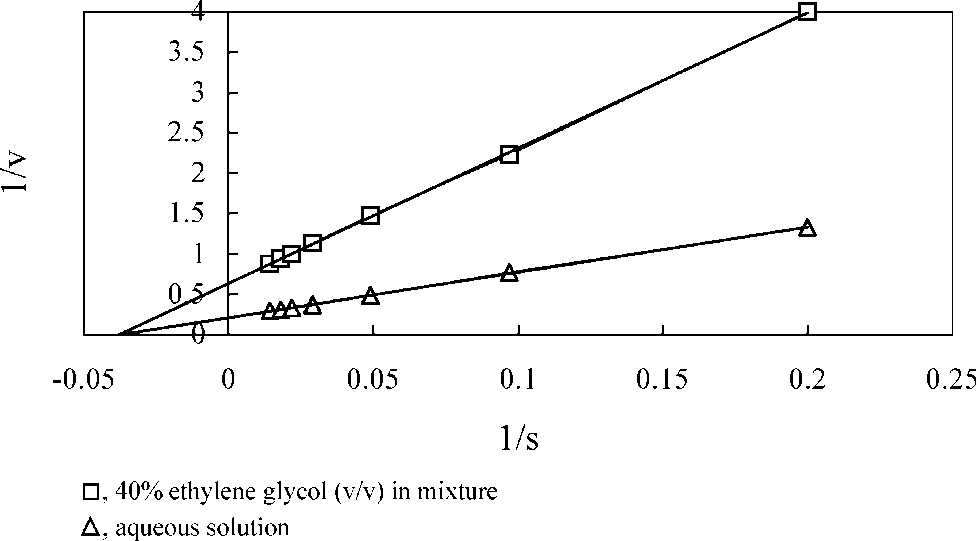 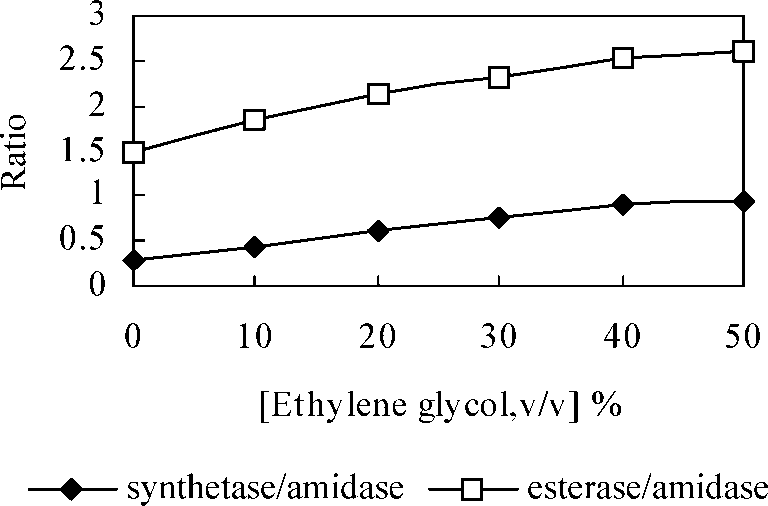