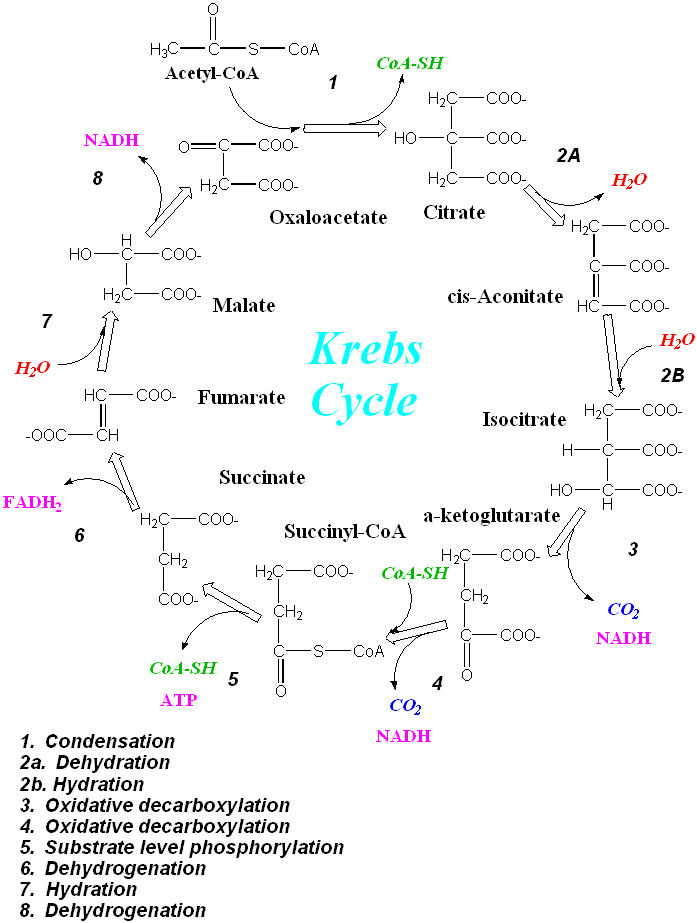 Step 1: Condensation
In step 1 of the Krebs cycle, the two-carbon compound, acetyl-S-CoA, participates in a
condensation reaction with the four-carbon compound, oxaloacetate, to produce citrate:
• This reacion is moderately exergonic. Thermodynamically, the equilibrium is in favor of the products. Thus, this is considered to be the first committed step of the Krebs cycle • Being the first committed step, this is a likely step to have some kind of regulatory control mechanism (which will effectively regulate the entire cycle) • The Krebs cycle is also known as the citric acid cycle. Citrate is a tricarboxylic acid, and the Krebs cycle is also known as the tricarboxylic acid (or TCA) cycle
Step 2. Isomerization of Citrate
As we will see later on in the Krebs cycle, there will be a decarboxylation reaction. • Such decarboxylation reactions usually involve α- (or β-) keto acids • The hydroxyl group of citrate can be oxidized to yield a keto group, but to form an α-keto acid it needs to be adjacent to one of the terminal carboxyl groups Thus, step 2 involves moving the hydroxyl group in the citrate molecule so that we can later form an α-keto acid • This process involves a sequential dehydration and hydration reaction, to form the D-Isocitrate isomer (with the hydroxyl group now in the desired α- location), with cis-Aconitase as the intermediate • A single enzyme, Aconitase, performs this two-step process:

• This reaction is endergonic, so the equilibrium is in favor of the reactants and not the desired product. However, the exergonic character of the next reaction in the cycle helps shift the equilibrium of this reaction towards the right. • There are two asymmetric centers in the D-Isocitrate molecule. Eeach can adopt either the L- or D- rotamer, thus there are 4 possible isomers of this molecule • Aconitase only produces the single form of Isocitrate (D-Isocitrate). Thus, Aconitase is a stereospecific enzyme Note: the stereospecificity of Aconitase was established by introducing carboxyl-
labeled Acetate into the Krebs cycle. The conversion of Acetate into Acetyl-CoA can
subsequently result in the labeling of Citrate. Although Citrate is a symmetric
molecule, the labeled carboxyl-group always ends up on the γ- carbon group in D-
Isocitrate
Step 3: Generation of CO2 by an NAD+ linked enzyme
• The Krebs cycle contains two oxidative decarboxylation steps; this is the first one • The reaction is catalyzed by the enzyme Isocitrate dehydrogenase

• The reaction involves dehydrogenation to Oxalosuccinate, an unstable intermediate which spontaneously decarboxylates to give α-Ketoglutarate • The reaction is exergonic, with a ΔG0' = -20.9 kJ/mol. This helps drive the preceding (endergonic) reaction in the cycle • In addition to decarboxylation, this step produces a reduced nicotinamide adenine dinucleotide (NADH) cofactor, or a reduced nicotinamide adenine dinucleotide phosphate (NADPH) cofactor • If the NAD+ cofactor is reduced, then the D-Isocitrate must be oxidized when forming α-Ketoglutarate. Thus, this step is referred to as an oxidative
decarboxylation step
Step 4: A Second Oxidative Decarboxylation Step
• This step is performed by a multi-enzyme complex, the α-Ketoglutarate • The multi-step reaction performed by the α-Ketoglutarate Dehydration Complex is analogous to the Pyruvate Dehydrogenase Complex, i.e. an α-keto acid undergoes oxidative decarboxylation with formation of an acyl-CoA • Overall, this oxidative decarboxylation step is more exergonic than the first

Summary of Kreb cycle reactions up to this point
Two carbons have been added to Oxaloacetate by the action of Citrate Synthase (and
Acetyl-CoA)
• Two carbons have been lost as CO2 by oxidative decarboxylation steps • Two oxidized NAD+ cofactors have been reduced to NADH • Due to the stereospecific action of Aconitase, the two carbons added are not the same two carbons lost in the oxidative decarboxylation steps In the remaining steps of the Krebs cycle, the Succinyl-CoA is converted back into the original substrate for the cycle: Oxaloacetate Step 5: Substrate-Level Phosphorylation
Succinyl-CoA is a high potential energy molecule. The energy stored in this molecule is used to form a high energy phosphate bond in a Guanine nucleotide diphosphate (GDP) molecule: • Most of the GTP formed is used in the formation of ATP, by the action of • In plants and bacteria ATP is formed directly in the Succinyl-CoA Synthase catalyzed reaction by phosphorylation of ADP directly. In animals, GDP is the substrate in the reaction with formation of GTP (which is then used to form ATP by Nucleoside Diphosphokinase)

Step 6: Flavin-Dependent Dehydrogenation
The Succinate produced by Succinyl CoA-Synthetase in the prior reaction needs to be converted to Oxaloacetate to complete the Krebs cycle. • Both Succinate and Oxaloacetate are 4-carbon compounds • The first step in the conversion is the dehydrogenation of Succinate to yield • In this reaction a C-C bond is being oxidized to produce a C=C bond. This oxidation is energetically more costly than oxidizing a C-O bond. • The redox coenzyme for this reaction is therefore FAD, rather than NAD+ (FAD is a more powerful oxidizing agent compared to NAD+) • FAD is covalently bound to the Succinate Dehydrogenase molecule (via a • The FADH2 has to be oxidized for the enzyme activity to be restored. This oxidation occurs via interaction with the mitochondrial electron transport system (bound to mitochondrial inner membrane). • Succinate Dehydrogenase is tightly bound to the mitochondrial inner membrane • Succinate Dehydrogenase is stereo-specific: the trans- isomer (Fumarate) is produced and not the cis- isomer (Maleate)
Step 7: Hydration of a Carbon-Carbon Double Bond
Fumarate undergoes a stereo-specific hydration of the C=C double bond, catalyzed by Fumarate Hydratase (also known as Fumarase), to produce L-Malate:

PROMOTING ACCESS TO JUSTICE- ISSUES AND CHALLENGES Munmun Singh, Fourth year student of B.A. LL.B. National Law University Delhi1 Abstract: India is rightly acclaimed for achieving a flourishing constitutional order, presided over by an inventive and activist judiciary, aided by a proficient bar, supported by the state and cherished by the public. At the same time, the courts, and