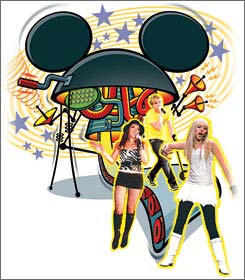 Disney music machine runs at top speed - USATODAY.com The connection with the audience goes much deeper than just hit songs. These young entertainers often portray boy- and girl-next-door characters who live out the tween daydreams: the girl with a secret life as a rock singer, the athlete who discovers an untapped talent for the theater. Then, Disney takes its viewers into the personal lives of actors/singers through such vehicles as its Express Yourself campaign, a series of short clips styled after public-service announcements, in which cast members from Disney shows talk about friendship, growing up and other topics of interest to youth. "That experience connects the audience much more passionately than any sort of stand-alone piece of music on the radio," Marsh says. Sean Ross of Edison Research & Media says: "It's interesting that Disney has kept the genre alive, even as radio cycles in and out of teen pop." He compares Disney's success with the early '60s teen-pop climate. "If you draw a line to the girl groups, it almost goes back to The Bobbettes or Johnny Angel." In the early '60s, New York's Brill Building housed such songwriting teams as Barry Mann and Cynthia Weil and Gerry Goffin and Carole King turned out hits for teen acts. Likewise, Disney has its core group of songwriters — Houston, Matthew Gerrard, Robbie Nevil, Tim James, Antonina Armato and duo Adam Watts and Andy Dodd — with song credits on Disney shows and Hollywood releases. Finding Brill-caliber pop tunes isn't the challenge, says Jon Lind, Hollywood Records' senior vice president of A&R and a songwriter whose credits include Madonna's Crazy for You and Earth, Wind & Fire's Boogie Wonderland. "It's creating songs with a group of people that I'm really comfortable with, who I think can dial it in for each of these different kids who is about to become a recording artist. They have to hang out, then they have to create songs from scratch, either on their own or in collaboration with these young kids. That is providing a much different result than just going out and finding all the songs." These songwriters often also act as producers and mentors, showing the ropes to teens who may have theatrical singing experience but rarely have spent time in a studio. "The environment that the producers and the writers have to create is more than just a record session," Lind says. "It has to be really nurturing. It has to be really safe. And that takes some special skills." "Jon sometimes calls it 'boot camp,' " says Gerrard, who co-wrote the Hannah Montana theme Best of Both Worlds, as well as Kelly Clarkson's Breakaway. "He'll send people to me, and we'll try them out on songs — see how high they can sing, how low they can sing, what's natural in their ability." "It can be challenging," Houston says. "But usually they'll have some sort of acting experience, so you're able to tap into that and help them emote a vibe for a particular song." Gerrard adds, "You figure out the strengths of people, and you write to their strengths. Adults often dismiss pop music aimed at young audiences, but kids have long memories, and the music often has surprisingly strong legs. Which pages in the new Disney songbook are likely to last? "The one I'm absolutely confident of is Breaking Free," says Marsh, reasoning that the High School Musical number "speaks to what kids are going through." Vincent names another Musical song. "We're All in This Together in some ways has become the company's new Small World," he says. That's good news to Nevil, who wrote the song with Gerrard, but it doesn't surprise him: "When we look back at the work we've been doing the last couple of years, I think we're going to realize how much of the soundtrack to a lot of kids' lives we've been a big part of." You must be logged in to leave a comment. Log in | Register
http://www.usatoday.com/life/music/news/2007-04-05-disney-music-main_N.htm