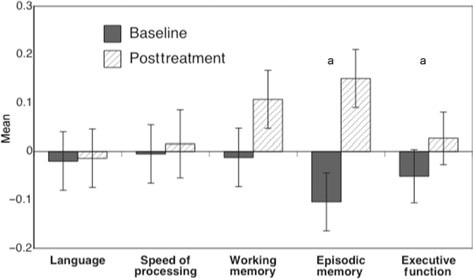 Cognitive Change in Late-Life Depression TABLE 1. Demographic, Clinical, and Cognitive Characteristics of Participants
Mean (SD)
Comparison of
Completers and
Variable
Completers
Noncompleters
Noncompleters
t(209) = 2.06, p = 0.04
Notes: bold value indicates the only variable that differed between completers and non-completers.
MMSE, Mini-Mental State Examination.
thus we used Spearman rank order correlations to FIGURE 1. Graph of performance in each of the five
cognitive domains at baseline and at
examine the relationship with cognitive change for posttreatment. Significance of change in each
this variable. As shown in Table 2, older age pre- cognitive domain was assessed with post-hoc
dicted less improvement in processing speed, work- contrast (F-tests with 1,165 dfs).
ing memory, and executive function. Later age ofonset predicted less improvement in executive func-tion. Higher vascular risk predicted less change inworking memory and executive function. More severewhite matter hyperintensities predicted less change inprocessing speed. Of note, the results were essentiallyidentical when partial correlations were used, exam-ining the relationship between posttreatment perfor-mance and the predictors, covarying for baseline cog-nitive performance.
We also examined whether the magnitude of improvement in depression predicted the magnitudeof improvement in cognition. To do so, we created a residualized change score for depression usingbaseline MADRS scores to predict posttreatment What Factors Predict Improved Cognition?
MADRS scores and correlated this with the residu-alized change scores for cognition. As shown in Table We computed residualized change scores for each 2, a greater reduction in MADRS scores predicted a of the five cognitive domains, using baseline perfor- greater improvement in language function but did not mance to predict posttreatment performance. We then predict improvement in the other cognitive domains.
used Pearson’s product moment correlations to com-pute the correlations between age, age of onset, vascu- Cognitive Improvement As a Function of
lar risk score, baseline Mini-Mental State Examination Remitter Status
scores, and baseline MADRS depression scores withthe 5 cognitive domain residualized change scores.
Some prior research suggests that cognitive Fazekas scores were not normally distributed and improvement over the course of treatment may vary Am J Geriatr Psychiatry 20:8, August 2012 Copyright American Association for Geriatric Psychiatry. Unauthorized reproduction of this TABLE 2. Correlations of Predictor Variables With Residualized Change Scores (Baseline to Posttreatment) in Each
Cognitive Domain
Variable
Language Function
Processing Speed
Working Memory
Episodic Memory
Executive Function
− 0.18a
− 0.25c
− 0.17a
− 0.24c
− 0.24c
− 0.17a
− 0.16a
− 0.16a
− 0.19a
Note: N = 166. Bold variables indicate siginificance and p>.05 or less. MMSE, Mini-Mental State Examination.
as a function of whether an individual was considered older individuals with depression and to determine to have remitted to treatment in terms of depression whether factors such as the degree of vascular burden, status.22,30 Thus, we examined cognitive change as a white matter hyperintensities, and/or age of onset function of remitter status, with a remitter defined as influenced the degree to which cognition improved someone who achieved a final MADRS score of 7 or during treatment in late-life depression. We found less. Of the 166 individuals with neuropsychological that both episodic memory and executive function data at both baseline and follow-up, 63 were remitters improved from baseline to posttreatment and that this and 103 were not. We computed a repeated-measures improvement occurred for individuals whose depres- analysis of variance with time (baseline, posttreat- sion remitted and for those whose depression did ment) and cognitive domain as within-subject factors not remit. However, working memory improved only and remitter status as a between-subject factor. This among individuals with depression whose depres- analysis of variance again revealed a time by cog- sion remitted. Of note, we cannot definitely attribute nitive domain interaction, F(4,656) = 9.92, p <0.001 these changes to the treatment, as we did not have and revealed a main effect of remitter status, F(1,164) a placebo control group. However, importantly, we = 8.37, p = 0.004. However, there was no signifi- found that a number of factors moderated the degree cant two-way interaction between remitter status and of improvement in cognition (whether it was specif- time, F(1,164) = 1.24, p = 0.27, or three-way interaction ically due to treatment or responsivity to practice) between remitter status, time, and cognitive domain, particularly among those individuals whose depres- F(4,656) = 1.56, p = 0.184. As shown in Figure 2, the sion did not fully remit. Specifically, older age, higher main effect of remitter status reflected the fact that vascular risk scores, and lower baseline Mini-Mental the nonremitters had overall worse cognitive perfor- State Examination scores predicted less improvement mance than the remitters at both baseline and post- in working memory. Furthermore, older age, later age of onset, and higher vascular risk scores predictedless improvement in executive function. In addition,more severe white matter hyperintensities predicted DISCUSSION
less improvement in processing speed.
The fact that episodic memory improved is consis- The goal of the current study was to examine the tent with prior work, suggesting that impairments degree to which cognitive function improved dur- in episodic memory may be associated with state ing the course of antidepressant treatment among components of depression and may be more likely Am J Geriatr Psychiatry 20:8, August 2012 Copyright American Association for Geriatric Psychiatry. Unauthorized reproduction of this

DIABETES CONTROL MATTERS A CLOSER LOOK AT ORAL AGENTS FOR THE PATIENT Today, there are several kinds of oral agents, ordiabetes pills, available for the treatment of type 2diabetes. If you have type 2 diabetes, your doctorand health care team can help you decide which oralagent or combination of oral agents are the best foryou. Here are some general tips about oral agents:• Many doctor