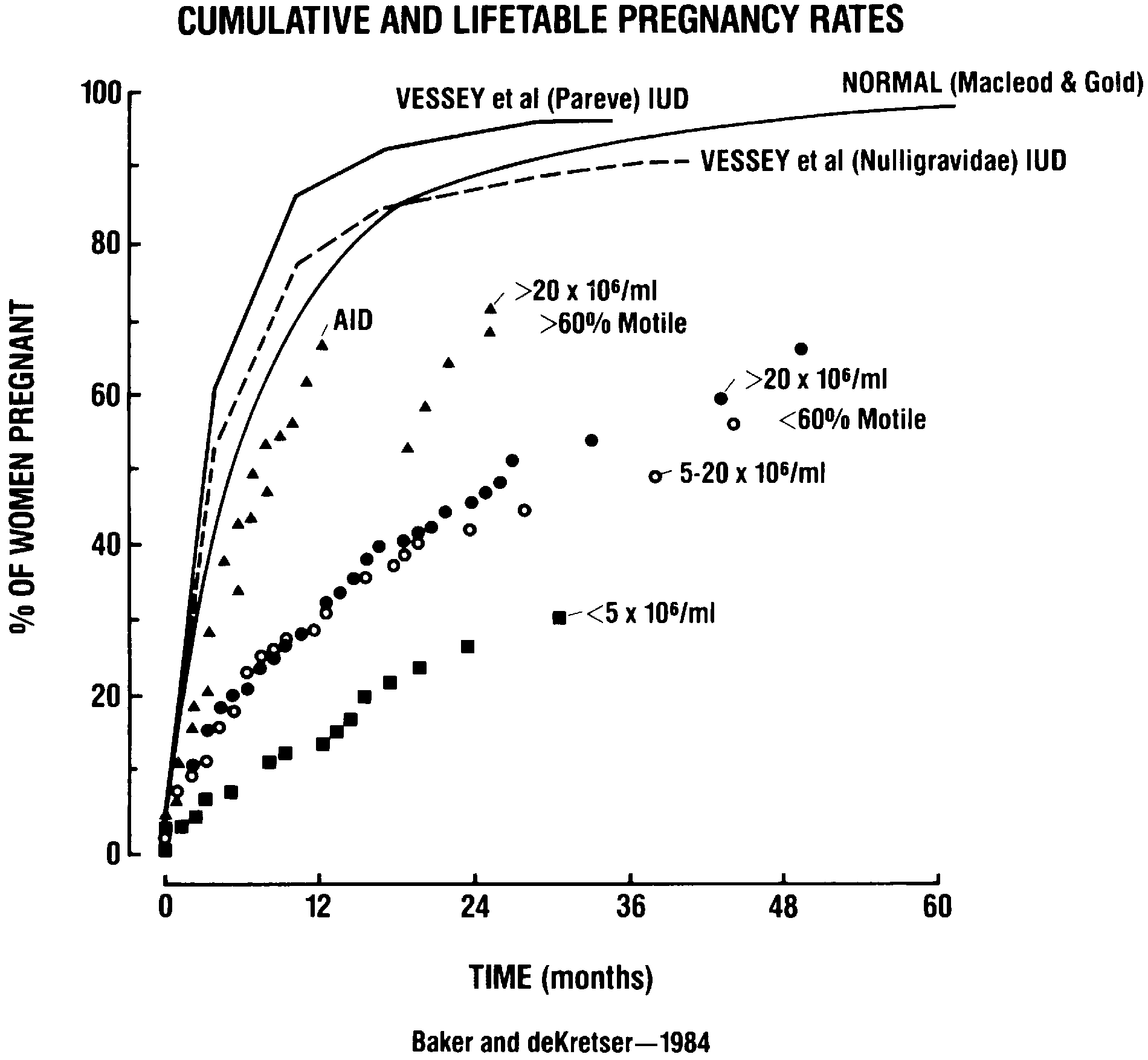 substantial percentage of couples achieved pregnancy sponta- couples would not have become pregnant without the surgery.
neously despite severe oligoasthenozoospermia (Figure 1).
Nieschlag concluded in 1998, as did Mordel in 1990, `Studies In 1983, Schoysman reported an extensive 12 year experience since 1952 advocating varicocelectomy have been uncontrolled following 1291 oligozoospermic men who underwent no and not evidence-based' (Mordel et al., 1990; Nieschlag et al., improvement in semen parameters (Schoysman and Gerris, 1983). They found that for men with sperm counts of 1±5 Q It is easy to become enthusiastic about any treatment of male 106 spermatozoa/ml, 12% of wives became pregnant within 5 infertility that is performed without adequate controls. In a series years and 27% of wives became pregnant within 12 years without of men with either azoospermia or extremely severe oligozoos- any treatment (Table III). Even when the sperm count was <1 permia, the pregnancy rate in 56 severely oligozoospermic men Q106 spermatozoa/ml, 4% of wives conceived spontaneously following varicocelectomy was 23% (13 out of 56), and for within 5 years, and 9% within 12 years without any treatment.
`azoospermic' men was 9% (two out of 22) (Steckel et al., 1993; When sperm counts were 15±20 Q 106 spermatozoa/ml, 69% of Matthews et al., 1998). The problem with these studies again is wives became pregnant within 5 years and 82% within 12 years, that there is no control group, no longitudinal follow-up, and it again with no treatment of the male. These studies demonstrate pays no attention to the concept of `regression toward the mean.' the dif®culty of interpreting whether any treatment of the male More recently a similar study (Kim et al., 1999) resulted in no with oligozoospermia, e.g. varicocelectomy, has any discernible spontaneous pregnancies even in the varicocelectomy group even though these authors maintained that sperm count `improved' In 1975, Amelar and Dubin compiled a summary of all after surgery. Once again there is no control group of similar varicocelectomy studies prior to that time (Dubin and Amelar, patients who did not receive surgery. We all have seen men who 1975). None of the 11 papers on varicocelectomy published by are initially azoospermic, who will eventually, in subsequent 1975 was controlled. Most of them showed ~60±70% of patients semen analyses, have spermatozoa in the ejaculate without any had an improvement in sperm count, and most of the studies treatment (MacLeod and Gold, 1953; Baker and Kovacs, 1985).
showed pregnancy rates from a low of 30% to a high of 55%.
Without a control group to compare with, one should not be None of the studies controlled for the pregnancy rate in couples surprised to see a spontaneous pregnancy rate of 9±23% without not undergoing varicocelectomy, and just assumed that these any treatment of the male partner with severe sperm defects, particularly if the couple has had a short period of infertility, and/ or if the wife is young (Hargreave and Elton, 1983; Schoysman Varicocelectomy and sperm countMacLeod and Gold, as far back as 1951 (MacLeod and Gold, 1951; MacLeod and Gold, 1953), ®rst demonstrated that sperm concentration and motility tend to increase with time with repeated testing in oligozoospermic and asthenozoospermic men despite no treatment. This was a peculiar mathematical quirk related to the highly variable nature of the sperm count. That means that, without any treatment whatsoever, if you continue to get sperm counts and semen analyses longitudinally on men who initially have low sperm counts and poor motility, the low sperm count and the poor motility will routinely tend to increase with repeated tests and no treatment (MacLeod and Gold, 1951, 1953).
Baker et al. were the ®rst to clearly and mathematically explain this phenomenon of `regression toward the mean' (Baker et al., 1981; Baker and Kovacs, 1985; Baker, 1986). `Regression toward Figure 1. Cumulative and life-table pregnancy rates (Baker and Burger, 1986).
the mean' has profound implications for all clinical trials.
Whenever there is a highly variable measurement, if patients have a controlled period followed by a treatment period, there is Table III. Pregnancy rates in 1291 oligozoospermic men (Schoysman and likely to be a signi®cant improvement even if the treatment is ineffective. Baker et al. observed the same phenomenon that McLeod and Gold had observed 30 years earlier, that sperm concentration and motility increased progressively in their study of day-to-day variability of semen analyses in infertile men.
Sperm motility increased equally on both active drug and on placebo treatment in a double-blind controlled trial of erythro- mycin for asthenozoospermia (Baker et al., 1984). Clearly, erythromycin had no impact whatsoever on either sperm count or sperm motility. However, in this double blind control study, it was obvious that the sperm motility increased in an equal manner in 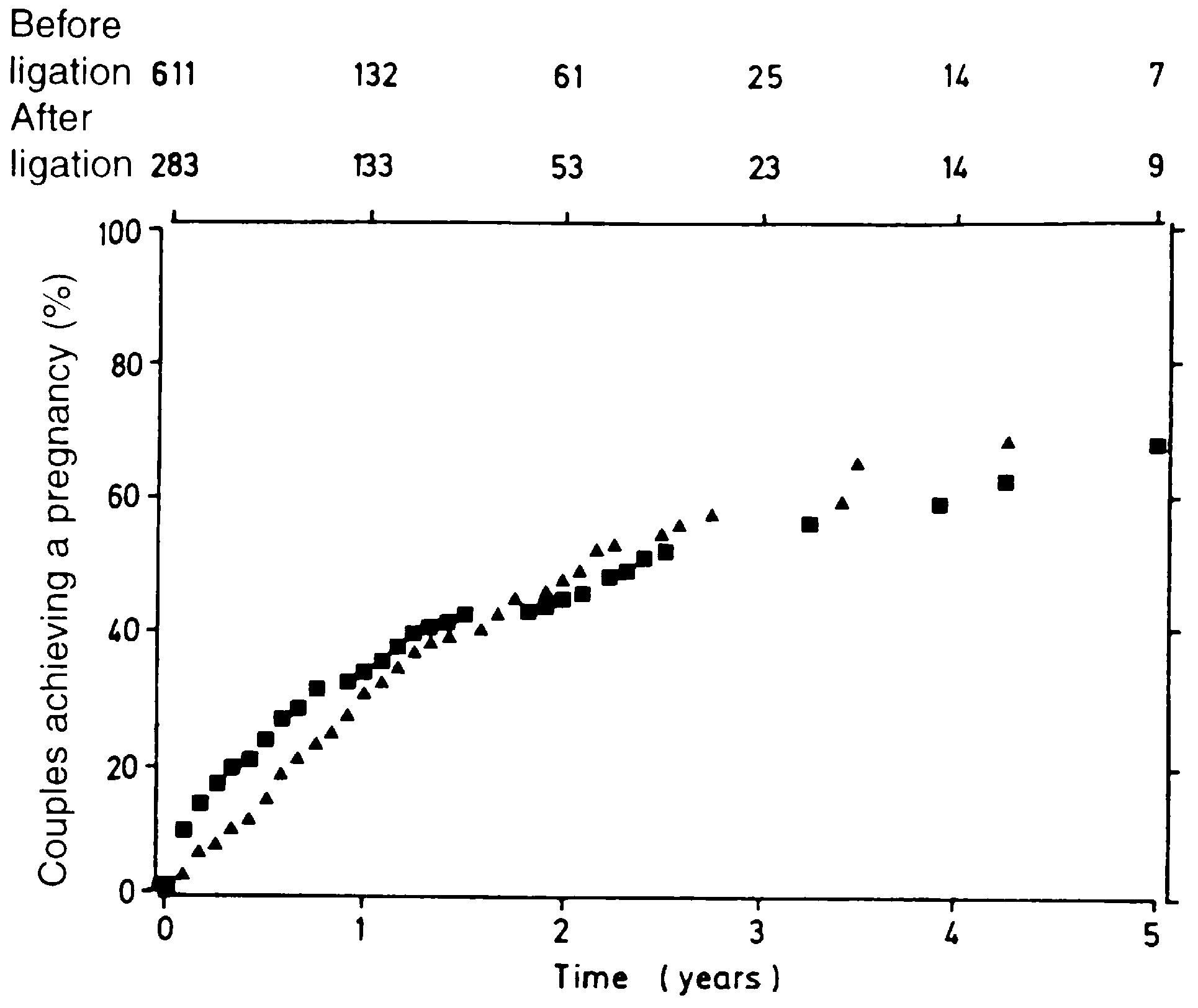 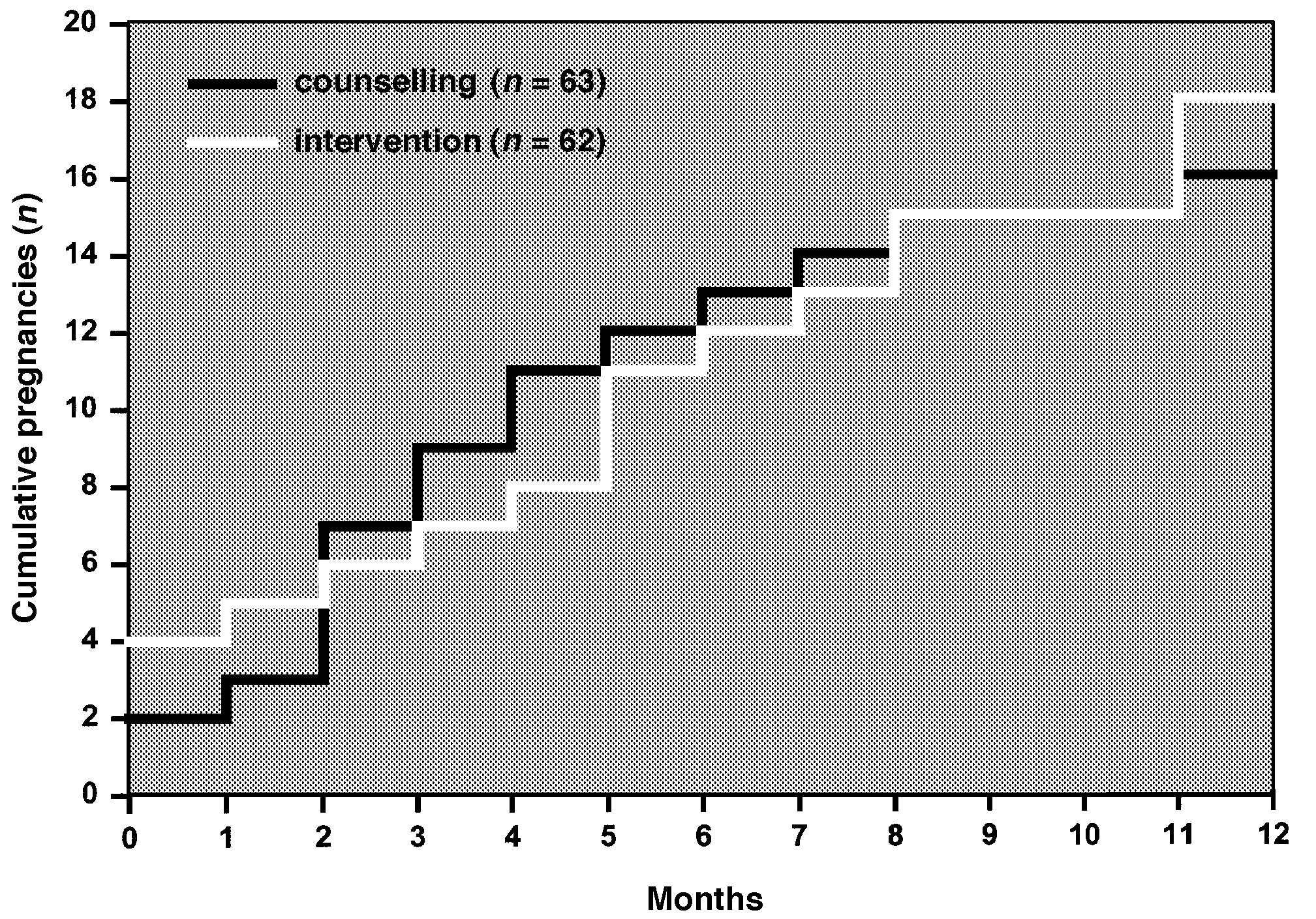 James C. Wittig, MD Orthopedic Oncologist Percutaneous Radiofrequency Ablation (RFA) The latest, “State of the Art Treatment” for Osteoid Osteoma is PERCUTANEOUS RADIOFREQUENCY ABLATION (also known as RFA). This is a minimally invasive procedure that is performed under a CAT Scan, usually by a highly specialized musculoskeletal radiologist, in which a needle or probe is in