Yamanashi Med. J. 17(3), 69~ 74, 2002
Original Article
Effects of Sildenafil (ViagraTM) on the Cyclic AMP Hydrolyzing Phosphodiesterase Activity in the Canine Heart Assessed Using a Modified Enzymatic Fluorometric Assay Technique Atsushi SUGIYAMA, Yoshiki SAEGUSA, Akira TAKAHARA Departments of Pharmacology and 1)Neurosurgery, Tamaho-cho, Nakakoma-gun, Yamanashi 409-3898, Japan Abstract:
Sildenafil is a phosphodiesterase type-5 (PDE5) inhibitor, but has stimulatory effects on heart in vivo and in vitro. We evaluated the effects of sildenafil on the cyclic AMP hydrolyzing PDEactivity in a crude enzyme preparation made from the intact canine heart using the modified enzy-matic fluorometric assay technique. The basal PDE activity was 485 6). Sildenafil as well as a non-specific PDE inhibitor, 3-isobutyl-1-methylxanthine (IBMX) inhib- ited the PDE activity in a concentration-related manner. Significant inhibition at 1–10 Òmol/L ofsildenafil was almost equivalent to that of the same concentration of IBMX. These results suggest thatsupra-therapeutic concentration of sildenafil may directly inhibit cyclic AMP hydrolyzing PDEs in theintact heart.
Key words: Sildenafil, Phosphodiesterase, Enzymatic Fluorometric assay, Cyclic AMP
cyclic AMP hydrolyzing PDE activity in theintact heart is still lacking.
Sildenafil is a selective inhibitor of cyclic In this study, we assessed the inhibitory effects GMP-specific phosphodiesterase type 5 (PDE5) of sildenafil on cyclic AMP hydrolyzing PDE which is predominantly found in the corpus cav- activity in a crude enzyme preparation made ernosum1-5). In our previous study in vivo6), from the intact canine heart. In order to pre- supra-therapeutic concentrations of sildenafil cisely estimate the hydrolyzing speed of cyclic exerted positive chronotropic and inotropic effects in addition to a hypotensive action. This enzymatic fluorometric assay technique8). The cardiostimulatory action may be attributed to difficulty in assaying the effects of PDE not only the sympathetically mediated reflex inhibitors in vitro results from the fact that a but also the non-specific PDE inhibition.
small fraction of PDE inhibitor is transferred to Indeed, Stief et al. reported that sildenafil the cyclic AMP assay, which can delay the 1st increased the cyclic AMP concentration in iso- reaction of Step 2 in Part B, as shown in Fig. 1.
lated human cardiac tissue7). However, informa- To solve the problem, the converting reaction tion regarding the effects of sildenafil on the of cyclic AMP to AMP (Step 2 in Part B) was combined with the following 2 reactions as Step 2 and their incubation time was prolonged to 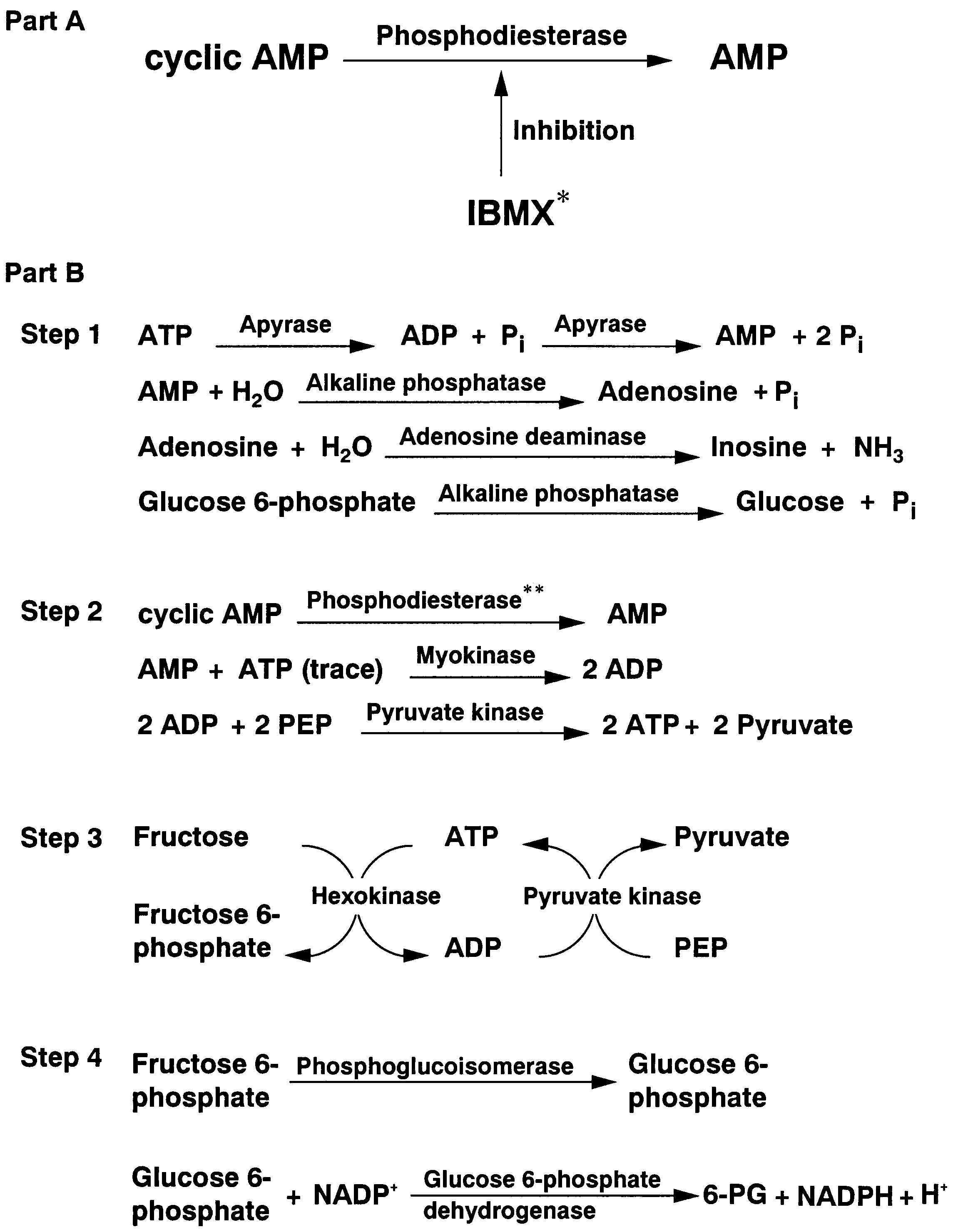 Diagram of reactions in the enzymatic fluorometric assay. IBMX: 3- isobutyl-1-methylxanthine; Pi: inorganic phosphate; PEP: phospho-enolpyruvate; and 6PG: 6-phosphogluconolactone.
6 hr. A non-specific PDE inhibitor, 3-isobutyl-1- Production of crude enzyme preparation of the heart methylxanthine (IBMX) was used as a reference Ventricular enzyme preparation was obtained to assess the sensitivity and specificity of this from six female beagle dogs weighing approxi- mately 10 kg, as previously described10). Briefly,each dog was anesthetized with pentobarbital sodium (30 mg/kg, i.v.), given heparin calcium(500 U/kg), and exsanguinated. The heart was All experimentation was performed in accor- excised and immediately placed in ice-cold SET dance with the rules and regulations of the buffer (0.25 mol/L sucrose; 0.1 mmol/L EDTA; Committee for Research at Yamanashi Medical 5.0 mmol/L Tris-acetate, pH 7.4). A portion (3–5 g) from the left ventricular apex was able assay tube (Iwaki Lab Ware, Tokyo, Japan) (Nitex filter, Tetko, CA, U.S.A.) and centrifuged in triplicate. For the cyclic AMP standard, 5 ÒL for 5 min at 10,000 g. The pellet was resuspend- of a known amount of cyclic AMP was added to ed in SET buffer and centrifuged three more the tubes. The cyclic AMP assay consists of the times. The final pellet was resuspended in SET following 4 steps. Step 1: A volume of 25 ÒL of
buffer. The protein concentration was mea- reaction mixture A (100 mmol/L Tris-HCl, pH sured using a commercially available protein 8.0; 2 mmol/L MgCl2; 4 units/mL apyrase; 10 assay reagent (Pierce, Rockford, IL, U.S.A.).
units/mL adenosine deaminase; 40 units/ml The crude enzyme suspension was diluted with alkaline phosphatase) was added to each tube.
SET buffer to a concentration of 3–5 mg pro- The mixture was incubated at 37°C for 5 min to destroy potential interfering substances includ- ing non-cyclic adenine nucleotides and phos-phorylated metabolites. Enzymes were then destroyed by heating for 3 min at 95°C. Step 2:
The assay consisted of two parts; namely, hydrolysis of externally added cyclic AMP by the enzyme preparation (Part A) and measurement of residual cyclic AMP concentration (Part B), as shown in Fig. 1. With the use of the enzymat- ic fluorometric assay technique, changes of 20 fmol of cyclic AMP/assay tube could be detect- units/mL myokinase; 80 units/mL pyruvatek- inase) was added to each tube from Step 1. The Par t A: Fifty ÒL of reaction mixture
mixture was incubated for at least 6 hr at room (100 mmol/L Tris-acetate, pH 7.4; 20 mmol/L temperature, normally performed overnight, to completely convert cyclic AMP to ATP. Step 3: A
serum albumin; 20 Òmol/L cyclic AMP) was added to each microcentrifugation tube in trip- licate with or without either of sildenafil (0.02, 8 mmol/L fructose; 60 units/mL hexokinase) 200 Òmol/L). Next, the enzyme suspension in a was added to the tubes from Step 2 on ice. The volume of 50 ÒL was added to each tube on ice.
mixture was incubated for 1 hr at 37°C to ampli- The reaction was initiated by placing the tubes fy ATP to about 1,000 times the value of fruc- in a water bath maintained at 37°C. After 20 tose-6-phosphate. Step 4; A volume of 125 ÒL of
min, the reaction was terminated by heating the reaction mixture D (100 mmol/L Tris-HCl, pH tubes at 95°C for 5 min. The mixture was vor- 8.0; 3.2 mmol/L EDTA; 0.6 mmol/L NADP ; 1 texed 3 times and centrifuged at 10,000 g for 5 min. Twenty-five ÒL of the supernatant was units/mL glucose-6-phosphate dehydrogenase) diluted with 100 ÒL of distilled water (5 times was added to the tubes from Step 3. After the mixture was incubated for 10 min at room tem- Part B: A volume of 5 ÒL of the diluted super-
perature, a volume of 600 ÒL of distilled water 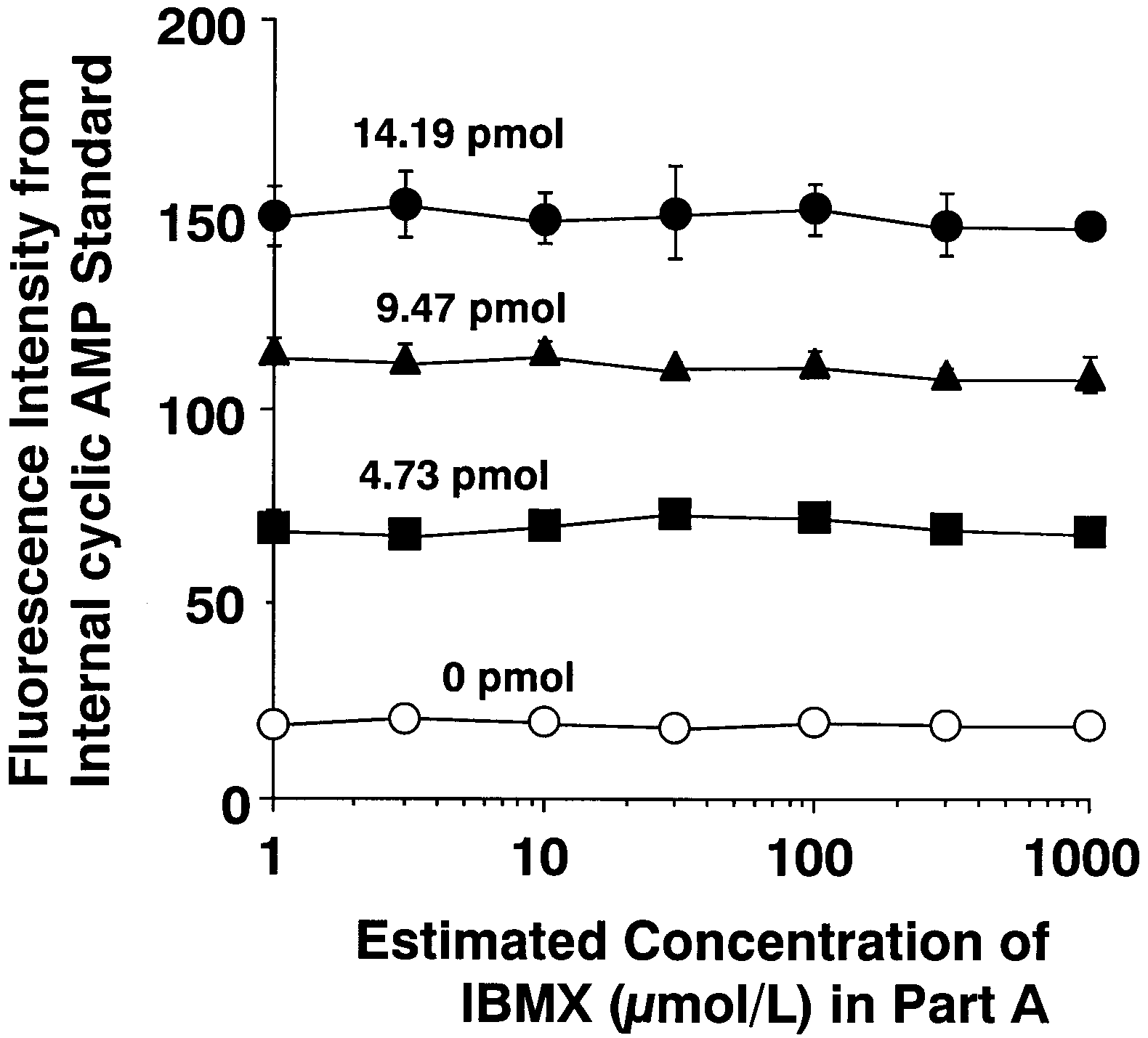 was added to each tube. The concentration ofNADPH, formed when the glucose-6-phosphatewas converted to 6-phosphogluconolactone, wasmeasured using the fluorescence spectropho-tometer (Hitachi, F-3000, Tokyo, Japan) as anemission fluorescence of 460 nm by an excita-tion wave of 340 nm.
ously provided by Pfizer Pharmaceuticals Inc.
(Tokyo, Japan). Apyrase, phosphoenolpyruvate,phosphodiesterase, IBMX, sucrose, fructose,and dithiothreitol were obtained from Sigma Effects of IBMX on enzymatic fluorometriccyclic AMP assay. The potential inhibitory Chemical Company (St. Louis, MO, U.S.A.). All effect of IBMX (IBMX* in Part A of Fig. 1) other enzymes and substrates were obtained cyclic AMP assay (Phosphodiesterase* in PartB of Fig. 1) was assessed. The cyclic AMP internal standard in Part B consists of 0(open circles), 4.73 pmol/assay tube (closedsquares), 9.47 pmol/assay tube (closed trian- gles) and 14.19 pmol/assay tube (closed cir- cles). The IBMX concentration in Part A is tical comparisons of mean values were evaluated shown in the horizontal axis. No significantinhibition was detected in the cyclic AMP by one-way repeated measures ANOVA followed assay by the currently used concentration of by Contrasts for mean values comparison. P-val- ues less than 0.05 were considered significant. in Part A, the PDE of Step 2 in Part B was activeand could completely convert cyclic AMP to Effects of PDE inhibitors in Part A on the reaction of AMP, which resulted in the dose-related genera- A portion of PDE inhibitors, like IBMX in the reaction mixture (Part A), is transferred to the Effects of IBMX and sildenafil on the PDE in the cyclic AMP assay (Part B), which can potentially inhibit the conversion of cyclic AMP to AMP of PDE activity was calculated as the hydrolyzing Step 2 in Part B, as shown in Fig. 1. To assess speed of cyclic AMP by measuring the amount this potential inhibition in the currently used of residual cyclic AMP concentration in the modified assay protocol, the effects of increas- supernatant in Part A. The results of multiple ing concentrations of IBMX (1–1,000 Òmol/L) analysis of a single sample did not differ by on the fluorescence from the internal cyclic AMP standard were examined. As shown in Fig.
. The results are summarized in Fig. 3.
2, with IBMX at concentrations of ≤ 1 mmol/L 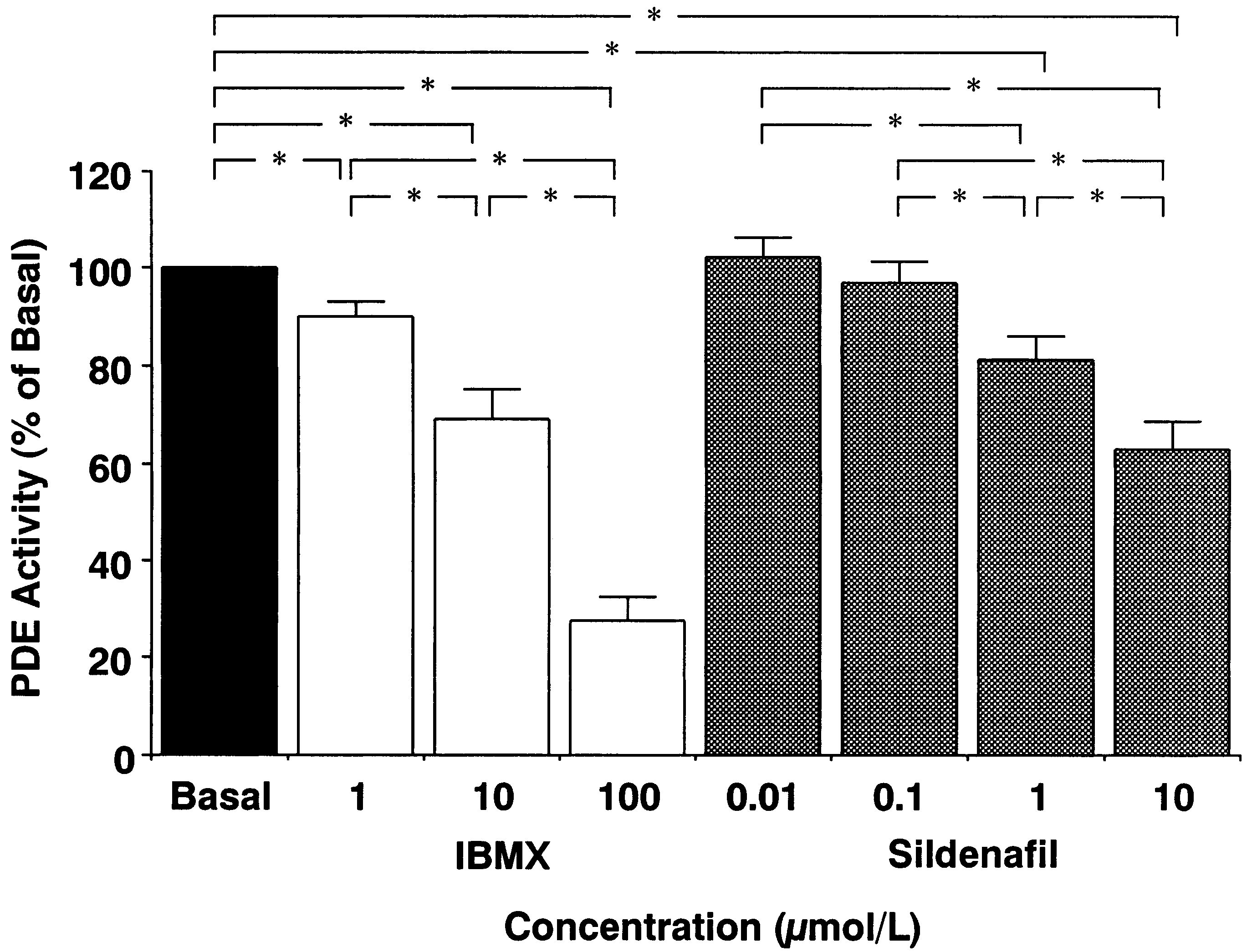 Effects of IBMX (1–100 Òmol/L) and sildenafil (0.01–10 Òmol/L) on PDE activitiesof the crude enzyme preparation made from the canine heart. Data are expressed asthe mean activity. Indeed, the inhibitory effects of IBMX well as IBMX inhibited the PDE activity in a in concentrations of ≤ 1 mmol/L on the PDE concentration-related manner. Significant inhi- activity can be assessed with the current proto- bitions were detected at 1–100 Òmol/L for col. With this new method, we demonstrated IBMX and 1–10 Òmol/L for sildenafil compared that sildenafil at concentrations of ≥ 1 Òmol/L with the basal activity. Significant differences in effectively inhibited the cyclic AMP hydrolyzing the PDE activities between the different concen- PDE activity of the heart, which is essentially in trations of the drugs are also depicted in Fig. 3.
accordance with a recent report of human car-diac tissue7).
Sildenafil has been widely prescribed for patients with erectile dysfunction4,5). Post-mar- Given the limited information regarding the keting surveillance data after approval of silde- effect of sildenafil on the cyclic AMP hydrolyz- nafil by the Food and Drug Administration ing PDE activity in the heart7), we assessed it revealed a number of serious cardiovascular using the crude enzyme preparation made from events, including myocardial infarction and sud- the intact canine ventricle. As clearly shown in den death from cardiac causes, which were asso- the results, the modified enzymatic fluoromet- ciated with use of the drug4,5). In this study, we ric assay was highly efficacious for estimating found that the extent of inhibition of cyclic the inhibitory effect of the drugs on the PDE AMP hydrolyzing PDE activity by sildenafil was comparable to that by IBMX, whereas the thera- tile responses of trabeculae and aortic rings in peutically effective free plasma concentration of vitro. Am J Cardiol, 83: 3C–12C, 1999.
2) Jackson G, Benjamin N, Allen MJ: Effects of sildenafil citrate on human hemodynamics. Am J 40 nmol/L3-5). These present and previous Cardiol, 83: 13C–20C, 1999.
results suggest that an extremely high dose of 3) Zusman RM, Morales A, Glasser DB, Osterloh LH: Overall cardiovascular profile of sildenafil sildenafil would induce PDE inhibition in the in citrate. Am J Cardiol, 83: 35C–44C, 1999.
4) Cheitlin MD, Hutter AM Jr, Brindis RG, Ganz P, In summary, the enzymatic fluorometric assay Kaul S, et al.: Use of sildenafil (Viagra) inpatients with cardiovascular disease. Circulation, technique is applicable to assess drug effects on 99: 168–177, 1999.
the PDE activities, and higher doses of sildenafil 5) Speakman MT, Kloner RA: Viagra and cardiovas- may directly exert a cardiostimulatory effect via cular disease. J Cardiovasc Pharmacol Ther, 4:
259–267, 1999.
PDE inhibition. The data shown in this study 6) Sugiyama A, Satoh Y, Shiina H, Takahara A, may also provide a convenient guideline for Yoneyama M, et al.: Cardiac electrophysiologic comparing drugs with potential PDE inhibitory and hemodynamic effects of sildenafil, a PDE5inhibitor, in anesthetized dogs. J Cardiavasc Pharmacol, 38: 940–946, 2001.
7) Stief CG,Ückert S, Becker AJ, Harringer W, Truss MC, et al.: Effects of sildenafil on cAMP and
cGMP levels in isolated human cavernous and
cardiac tissue. Urology, 55, 146–150, 2000.
The authors thank Mr. Yuji Nakamura, Mrs.
8) Sugiyama A, Lurie KG: An enzymatic fluoromet- Akiko Moriya and Miss Emiko Tatsuzawa for ric assay for adenosine 3’: 5’-monophosphate.
Anal Biochem, 218: 20–25, 1994.
9) Beavo JA: Cyclic nucleotide phosphodiesterase: functional implications of multiple isoforms.
Physiol Rev, 75: 725–748, 1995.
10) Sugiyama A, Yatomi Y, Ozaki Y, Hashimoto K: Sphingosine 1-phosphate induces sinus tachycar- 1) Wallis RM, Corbin JD, Francis SH, Ellis P: Tissue dia and coronary vasoconstriction in the canine distribution of phosphodiesterase families and isolated, blood-perfused heart preparations. Car- the effects of sildenafil on tissue cyclic diovasc Res, 46: 119–125, 2000.
nucleotides, platelet function, and the contrac-