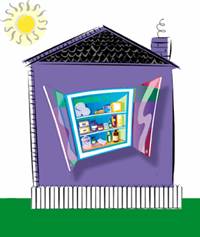 Medicines in my Home: Caffeine and Your Body Caffeine occurs naturally in more than 60 plants including coffee beans, tea leaves, kola nuts used to flavor soft drink colas, and cacao pods used to make chocolate products. Man-made caffeine is sometimes added to foods, drinks, and medicines. Ninety percent of people in the world use caffeine in one form or another. In the U.S., 80 percent of adults consume caffeine every day – the average adult has an intake of 200 mg per day, the amount in two 5-ounce cups of coffee or four sodas. A study of 7th, 8th, and 9th grade students in Ohio found that students took in an average of 53 mg of caffeine per day, but almost one in five students took in more than 100mg of caffeine each day. Whether caffeine is consumed in food or as a medicine, it changes the way your brain and body work and changes how you behave and feel. Caffeine is a central nervous system stimulant. Your central nervous system includes your brain, spinal cord, and the other nerves in your body. Caffeine’s main effect on your body is to make you feel more awake and alert for a while, but it can also cause problems. It can: Did You Know?
• Make it hard to fall asleep, stay asleep, DOES NOT get rid of the effects
• Make you dehydrated (dried out) especially after a workout • Make you dependent on it so you need to take more of it The FDA says that caffeine is both a drug and a food additive. Caffeine is used in both prescription and over-the-counter medicines to treat tiredness or drowsiness and to improve the effect of some pain relievers. People with heart problems shouldn’t use caffeine because it makes their hearts work too hard, and people with anxiety problems or panic attacks may find that caffeine makes them feel worse. After drinking caffeine, it usually reaches its peak level in your blood within one hour and stays there for four to six hours. Caffeine increases the release of acid in your stomach, sometimes leading to an upset stomach or "heartburn." Caffeine is a diuretic, meaning it makes your body lose more water. So, drinks that contain caffeine aren’t good for quenching your thirst. Whether you drink sodas or coffee with caffeine or use medicines with caffeine, take care to drink extra water when you are working out or in the heat so your body doesn’t get dehydrated (dried out). Most experts feel that using small amounts of caffeine during pregnancy is safe, but larger amounts of caffeine can be harmful during pregnancy. Women who are pregnant or planning to get pregnant should speak with their doctor about using caffeine. (Organization of Teratology Information Specialists. Caffeine and Pregnancy. December 2006.) When people use caffeine every day, their Did You Know?
bodies get used to it, and they don’t get the “good effects” of feeling more awake and able Experts agree that four to seven to concentrate unless they use more of it. This is called “tolerance.” Some studies show is too much. that caffeine causes a physical dependence or addiction. If a person gets withdrawal symptoms when they suddenly stop using caffeine, then the person has a physical dependence on caffeine. Withdrawal symptoms don’t feel good and can include: severe headaches, muscle aches, temporary feelings of depression, and irritability. When people experience these symptoms, they often just take in more caffeine to make them go away. This cycle is hard to break. Studies suggest that moderate amounts of caffeine are not harmful. How much is moderate? One hundred to 200 mg (one to two 5-ounce cups of coffee) each day is the limit that some doctors suggest, but each person is a little different. How caffeine affects people varies with their size, their sex, and how sensitive they are to caffeine’s effects. Experts agree that 600 mg (four to seven cups of coffee) of caffeine or more each day is too much. Caffeine overdose is dangerous and can kill you. FDA knows of a 19 year old college student who died after taking an overdose of caffeine tablets to stay awake. A caffeine tablet contains as much caffeine as one to three 5-ounce cups of coffee. Be informed. Learn how much caffeine is in your foods and drinks. Check the Caffeine Content Table to see how much caffeine you take in each day. If you’re taking in too much caffeine, you may want to cut back. This isn’t easy – reduce your caffeine slowly to make withdrawal symptoms (like bad headaches, and feeling tired, and depressed) as mild as possible. Caffeine Content in Common Drinks and Foods
(University of Washington)
Item size
Caffeine (mg)
Ben & Jerry’s No Fat Coffee Fudge Frozen Yogur 1 cup Originally Published: Fall 2007

Drug Information Sheet("Kusuri-no-Shiori") The information on this sheet is based on approvals granted by the Japanese regulatory authority. Approval details may vary by country. Medicines have adverse effects (risks) as wel as efficacies (benefits). It is important to minimize adverse effects and maximize efficacy. To obtain a better therapeutic response, patients should understand