Adipokines: inflammation and the pleiotropic role of white adipose tissue

British Journal of Nutrition (2004), 92, 347–355 Adipokines: inflammation and the pleiotropic role of white adipose tissue Neuroendocrine and Obesity Biology Unit, Liverpool Centre for Nutritional Genomics, School of Clinical Sciences,University of Liverpool, Daulby Street, Liverpool L69 3GA, UK White adipose tissue is now recognised to be a multifunctional organ; in addition to the central role of lipid storage, it has a major endo-crine function secreting several hormones, notably leptin and adiponectin, and a diverse range of other protein factors. These various pro-tein signals have been given the collective name ‘adipocytokines’ or ‘adipokines’. However, since most are neither ‘cytokines’ nor‘cytokine-like’, it is recommended that the term ‘adipokine’ be universally adopted to describe a protein that is secreted from (and syn-thesised by) adipocytes. It is suggested that the term is restricted to proteins secreted from adipocytes, excluding signals released only bythe other cell types (such as macrophages) in adipose tissue. The adipokinome (which together with lipid moieties released, such as fattyacids and prostaglandins, constitute the secretome of fat cells) includes proteins involved in lipid metabolism, insulin sensitivity, thealternative complement system, vascular haemostasis, blood pressure regulation and angiogenesis, as well as the regulation of energy bal-ance. In addition, there is a growing list of adipokines involved in inflammation (TNFa, IL-1b, IL-6, IL-8, IL-10, transforming growthfactor-b, nerve growth factor) and the acute-phase response (plasminogen activator inhibitor-1, haptoglobin, serum amyloid A). Productionof these proteins by adipose tissue is increased in obesity, and raised circulating levels of several acute-phase proteins and inflammatorycytokines has led to the view that the obese are characterised by a state of chronic low-grade inflammation, and that this links causally toinsulin resistance and the metabolic syndrome. It is, however, unclear as to the extent to which adipose tissue contributes quantitatively tothe elevated circulating levels of these factors in obesity and whether there is a generalised or local state of inflammation. The parsimo-nious view is that the increased production of inflammatory cytokines and acute-phase proteins by adipose tissue in obesity relates pri-marily to localised events within the expanding fat depots. It is suggested that these events reflect hypoxia in parts of the growingadipose tissue mass in advance of angiogenesis, and involve the key controller of the cellular response to hypoxia, the transcriptionfactor hypoxia inducible factor-1.
White adipose tissue: Adipokines: Inflammation: Obesity: Hypoxia: Cytokines: Acute phase proteins White adipose tissue (WAT) is the main site of energy sto- (Mohamed-Ali et al. 1998; Fru¨hbeck et al. 2001; Trayhurn rage in mammals and birds, substrate being deposited as triacylglycerols at a high energy density. Until the last In the present article we consider one of the key recent decade energy storage was seen as essentially the only developments in the function of white fat, i.e. inflammation role of white fat, apart from providing thermal and mech- and the role of the tissue as a source of proteins character- anical insulation. A revolution has occurred recently, how- istic of the inflammatory response. Specific aspects of this ever, in our understanding of the biological function of area have also been addressed in other recent reviews WAT; the tissue is now seen as a highly dynamic organ, (Coppack, 2001; Fru¨hbeck et al. 2001; Rajala & Scherer, being involved in a wide range of physiological and meta- 2003; Klaus, 2004). We consider first some important bolic processes far beyond the paradigm of fuel storage.
issues of definition and nomenclature which we believe This changed perspective has occurred through the recog- require clarification and agreement.
nition that WAT is an endocrine organ; white adipocytessecrete several major hormones, most notably leptin and Definitions: ‘adipokines’ not ‘adipocytokines’? adiponectin, together with a diverse range of other proteinsignals and factors. This is in addition to the adipocytes’ As the number of protein signals recognised to be secreted central role in the deposition and release of fatty acids from adipose tissue rapidly increased it became helpful to Abbreviations: CRP, C-reactive protein; HIF-1, hypoxia-inducible factor-1; , NGF, nerve growth factor; PAI-1, plasminogen activator inhibitor-1; SAA, serum amyloid A; VEGF, vascular endothelial growth factor; WAT, white adipose tissue.
* Corresponding author: Professor Paul Trayhurn, fax þ 44 151 706 5802, email [email protected] 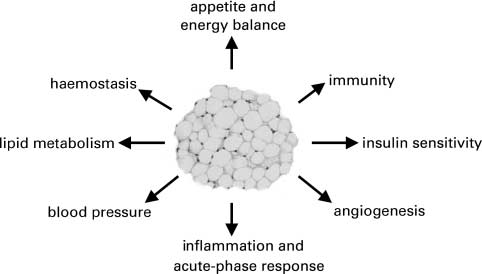