There is no consensus as to the perfect immunosuppressive regimen. This is emphasized by the wide variation in immunosuppressive protocols used by different centers in Europe and US. Protocols are important because they create some uniformity in treatment for patients, they allow each center to become familiar with particular combinations of immunosuppressive drugs and they allow for better study of patient outcome. The ability to deviate from protocol (according to set guidelines and suggestions for management) is also important because this enables the physician to better tailor immunosuppressive drugs to minimize side effects in particular patient populations. Data from WTC 2006 shows that patients who received a kidney transplant in 2004 in the US were discharged on the following medications: In general, use of tacrolimus and MMF is increasing, use of cyclosporine is decreasing and azathioprine is no longer used in US. Sirolimus is used more in Europe but its use in US appears to be decreasing (less than 10%). New trial data on sirolimus (conversion from CNI to sirolimus in all patients at 3 months post transplantation) is awaited. Induction with antibody therapy continues to increase (>90% of all kidney transplants). Approximately 60% receive ATG (increasing) and 20% Il-2 receptor antagonists and 10% campath. Optimizing long term graft survival
Chronic allograft nephropathy (CAN) and death with a functioning graft are the main two causes of graft loss. Reduction in the latter requires close attention to cardiovascular risk factors. CAN results from immune (acute cellular rejection and antibody mediated rejection) and non- immune (CNI toxicity, ATN, HTN, hyperfiltration) mediated injury. Most studies show that rejection is the biggest risk factor for CAN (CNI toxicity plays second place as a promotor of CAN). Therefore achieving very low rates of rejection should remain the principle goal of
immunosuppressive protocols.
There is increasing awareness from protocol biopsies, that the rates of subclinical rejection can be high in certain immunosuppressive regimens. Subclinical rejection is minimal but still present in patients on TAC and MMF (1,3,6 month rates of 5%, 8% and 9%) 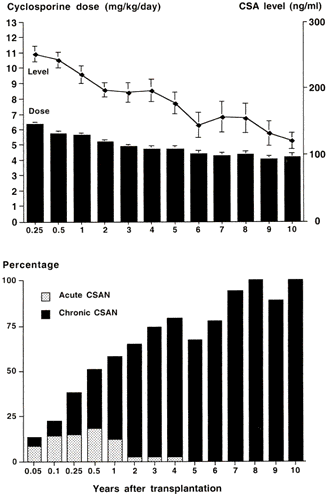 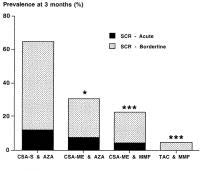 Prevalence of subclinical rejection at 3 months (Nankivell et al) Subclinical rejection at 3 months also correlates strongly with prevalence of CAN at 12 months. Good immunosuppressive cover in the first 6 -12 months (when risk of rejection is highest) is therefore the most important factor to prevent rejection and minimize CAN. This is best achieved CNI nephrotoxicity is almost universal however. The best marker is de novo nodular hyaline arteriosclerosis. This can appear as early as 1-3 months post transplantation and is a predictive marker for the fibrosis score at a year and the percentage glomerulosclerosis at 5-10 years. Although good levels of immunosuppression (and hence good levels of CNI ) are important in the first 6 to 12 months to prevent ACR, CNI minimization or withdrawal is increasingly seen as an Chronic CNI toxicity is detected in 100% of grafts by 10 years (Nankivell et al) Data at the WTC 2006 shed some light on CNI minimization and withdrawal and will be discussed Induction agents
NICE guidelines recommend use of IL-2 receptor antagonists (IL-2 RA) for all patients. In combination with CsA and azathioprine, IL-2 RAs lower acute rejection rates. This beneficial effect is not observed when Il-2 RA is combined with CsA and MMF. In low risk transplant patients, IL-2 RAs are as effective as rATG in preventing ACR. However in high risk patients rATG is better. ATG is associated with twice the amount of PTLD compared to IL-2 RA (0.9% vs 0.5% incidence at 1 year). ATG is used less in highly sensitized patients because it is associated with increased rates of de novo anti-donor antibodies post transplantation. Maintenance agents
Many studies (prospective and retrospective) have compared TAC and CsA. Overall there is no difference in patient or graft survival between agents. There may be some reduction in death censored graft survival with TAC. The main differences are a reduction in ACR with tacrolimus and an increased rate of post transplant diabetes. In a metanalysis in the BMJ, Webster et al reported that for every 100 patients on TAC compared with CsA, 12 episodes of ACR will be avoided, and 2 grafts will be spared from loss, but there would be 5 more cases of PTDM. Tacrolimus is associated with less HTN, less hyperlipidaemia, less hirustism but more alopecia and more neurotoxicty. The combination of tacrolimus and MMF is particularly potent because the bioavailability of MMF is greater associated with tacrolimus compared to CsA. This combination is associated with more polyoma virus nephropathy. CsA may be preferred in patients with HCV due in part to a need for less potent immunosuppression but perhaps also a direct anti-viral effect of When both drugs are to be used in one centre then it is preferable to reserve TAC for younger patients, and those with higher immunological risk (younger, second Tx, black race, highly sensitized, risk of DGF). CsA may be preferred in older patients, those with lower immunological risk (old age, first transplant, LRD) and those with increased risk of diabetes (obesity). However there is logic to recommend the use of one agent for the majority of transplant patients in any single centre to enable increased familiarity with one drug. Sirolimus should not be used from day 0 post transplant. It is associated with increased DGF, decreased wound healing and increased lymphocoele formation. More importantly it is not as potent as CNI when used with an antimetabolite (even MMF) and is associated with much higher ACR when used as first line treatment post transplantation. This was highlighted in the Symphony trial reported at WTC 2006 which showed that when combined with IL-2RA and MMF and steroids the rejection rate was 30-40%. ACR rates are acceptable with Sirolimus if combined with ATG induction. There is interest in this combination because both drugs cause an expansion of T regulatory cells and may be more tolerogenic (in clear disctinction to effects of CNI and IL-2 RA). Sirolimus is associated with less CMV infection than CNI. The role of sirolimus in CNI withdrawal remains under study but is likely beneficial if the switch is performed after 1 year post transplantation and graft function is good. (GFR>40) It is generally agreed that sirolimus should not be used in combination with either CsA or TAC because of an exacerbation of CNI toxicity. An increasing indication for sirolimus is in patients at high risk of malignancy or patients with proven malignancy particularly renal cell cancer. It is very beneficial in patient with skin cancer. Patients who are many years post transplant and have multiple skin lesions show marked improvement in skin lesions when switched to sirolimus. Aim for sirolimus levels 3-6. Do not give loading dose. Elderly patients do not tolerate high levels of sirolimus A big dilemma with CNI use is that they are needed within the first 6 to 12 months because they are the most effective agents at preventing ACR (which is the biggest cause of CAN), yet they contribute to CAN due to CNI toxicity and this unfortunately from protocol biopsy data can manifest as early as 1-3 months. A summary of recent trials assessing CNI withdrawal is given below: 1) CNIs cannot be withdrawn within 1 year post transplant successfully if patient left on MMF and steroids alone (unacceptable rate of ACR – 38%) (CAESAR STUDY-WTC 2006) 2) CNI can be converted to sirolimus at 1 year if GFR > 40 and no history of ACR. Small increase in ACR / Renal function better / less malignancy. 3) CNI cannot be converted to sirolimus at 1 year if GFR<40. Less favourable safety profile and no beneficial effect on renal function 4) CNI can be converted to MMF alone if greater than 1 year out with creeping creatinine without increased ACR. Improved renal function 5) CNI conversion to sirolimus at 6 months if GFR>40: some data to suggest possible if on MMF .Expect some increase in ACR but improved function 6) CNI conversion to sirolimus at 3 months (DATA to presented at ATC 2007 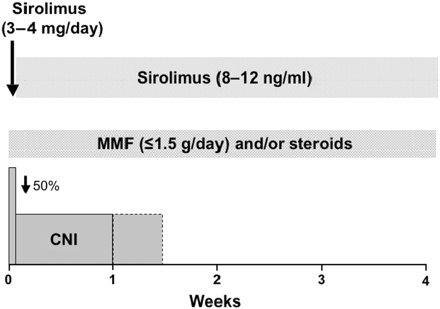 -Convert patient to MWF dialysis schedule
-Perform PP on 3 consecutive days (Wed / Fri / Mon) pre HD
-Remove minimum 1 plasma volume (40ml/kg)
-Replace 50% volume with 5% albumin and remaining with Normal Saline. Give FFP instead of
Normal Saline if (i) transplant anticipated in next 24 hrs or (ii) pt is requiring multiple runs of PP and
coags are prolonged
-5-10 tabs of CaCO3 during each PP
-CBC, chem7, tacrolimus level before each PP
4. IVIG
-Give IVIG (10g) over 2 hrs on HD
-Use an IVIG prep with low osmolarity
5. Repeat Crossmatching
-Check CXM on following monday
-Use AHG-CDC CXM for T cells and Amos-CDC for B cells
-If rituximab given will need pronase treatment to enable identification of positive B cell crossmatch
-When CXM neg – transplant in next 24hrs
-Ensure coags normal pretransplant

-basiliximab 20mg iv given day 0 and day 4 after PP
-Tacrolimus (trough 10-15),
-Increase MMF to 3g/day if tolerated,
-Standard steroid protocol
-PCP, and CMV prophylaxis as per usual.
2. Post-transplant PP and IVIG:
-Routine in all patients day 4 and 7 post transplant
-If very high PRA or high CXM titers against donor (>1:32) or required >6 PP pre-transplant routine
PP/IVIG should also be given on day 11 and 14
-Check post transplant CXM routinely 1x per week for 4 weeks
-
-IVIG prep should have low osmolarity and be given very slowly to avoid nephrotoxicty
-Note thymoglobulin, rituximab may interfere with CXM tests

Methicillin-resistant staph aureus (mrsa) which is community a

HEALTH MINISTRY Isaiah 26:3 “Thou wilt keep him in perfect peace, whose mind is stayed on thee: because he trusteth in thee.” Brain Fog Research shows that neither aging nor senility is typically to blame for clouded thinking. Forgetfulness, attention lapses and other complaints about mental sharpness are more closely related to mood and general mental health. It could stem fro