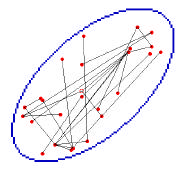 (i.e. a tree) with the base being the collection point, and the sensors forming the other nodes. Each radio link forms an edge of In its pure, unconstrained form, this problem admits an algorithmic solution (via Dijkstra’s shortest-path tree algorithm).19-21 The existence of this solution does not render the application trivial, because slight variations in the problem definition, as would be encountered in practice, make this problem NP-complete.19 Examples of such variations include: a constraint on the number of links a given node may receive and retransmit; a bandwidth limitation on the transmission channels or a degradation in transmission fraction with increased message traffic; a maximum number of links in a path to the collection point; or the possibility of redundant paths, where a node may transmit to more than one receiver. Optimization of a complex network with routing and bandwidth constraints is not amenable to algorithmic approaches, but can be attacked with GA.22 The existence of an algorithmic solution for the pure form of the problem does allow the performance of the KGA to be assessed relative to the sequence of optimal solutions.
The nodes are treated as executing a random walk within a prescribed area. (The vehicles are not dedicated to the sensors, but are engaged in other activities.) The movement of the nodes makes the problem environment dynamic. As the nodes move, the transmission probability along the links changes, and the optimal network configuration also changes.
A prescribed area on the ground of arbitrary shape and size is represented on a 2D Cartesian cell grid. The cell size, and the number of cells spanning the two dimensions, are adjustable. A baseline scenario has been constructed, in which each cell represents a 160 by 160 meter square, and a grid of 125 by 125 cells covers a 20 by 20 km area. In this baseline scenario, the vehicle/sensor/nodes are restricted to a roughly 10 by 20 km elliptical region as shown in Fig 2.
Figure 2. Example scenario, showing a user-prescribed region, 25 randomly placed nodes, and a randomly generated link network. The collection point is shown as the open circle.
Let S designate the total number of nodes, exclusive of the collection point. The baseline scenario contains 25 sensor nodes.
These vehicle-mounted sensors can be initialized by assigning each sensor to a random cell within the prescribed area. Only one sensor can occupy a cell. Fig. 2 shows the locations of 25 randomly placed sensors.
Each node establishes a radio link to another node or to the collection point, to transmit its own data, and any data it receives from other nodes. Each node has a unique ID in the range of one to S. The receiver of a node is specified by an integer in the range of zero to S. A value of zero indicates that the link is transmitting directly to the collection point, while any other value specifies the ID of the receiving node. The network configuration is completely specified by giving the receiver for each 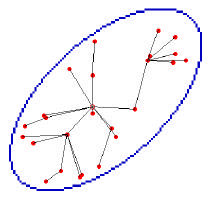 Smithers Summary Shandi Hopkins was admitted to the residential treatment program, Smithers Alcoholism and Rehabilitation Center, at Roosevelt Hospital on 4/18/01 and discharged 5/27/01. He was in touch with me regularly, sometimes twice a day while in the program. I obtained an 800 number to enable him to stay in touch with me when I moved from New York last July to begin teaching at Illinoi