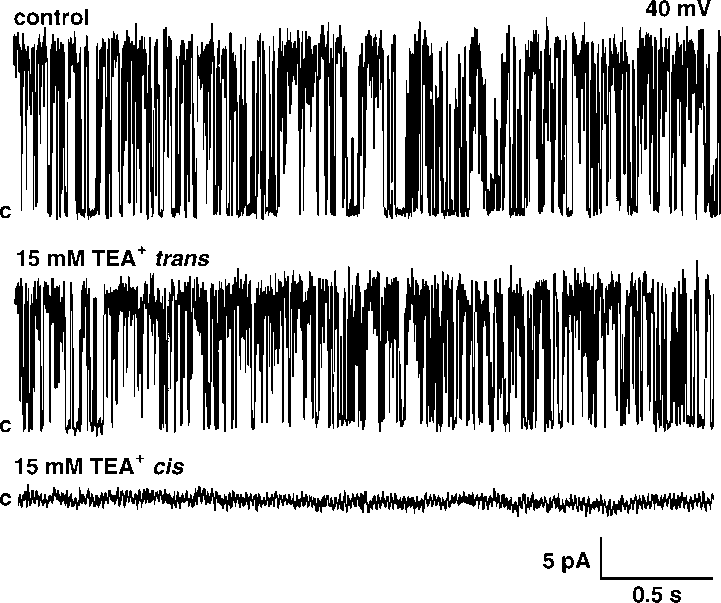 Calculated probability of opening for 50 mV in symmetrical450 mM KCl was Popen0/0.519/0.15 whereas for (/50 mVwas only Popen0/0.119/0.07. Such a result clearly indicatedthat potassium channel with large conductance is voltagedependent. We also performed gating analysis of singlechannel recording at 50 mV and (/50 mV in symmetrical450 mM KCl, pH 7.0. Single current amplitudes at 9/50 mVobtained from histograms had the same values ( Â/229/1 pA)whereas strong differences were observed in the closed- andopen-time distributions. The calculated open-times for thelarge conductance potassium channel investigated are:to 0/9.749/0.37 ms at 50 mV but only to 0/3.859/0.31 ms at (/50 mV. The effect was more evident for the closed-times: tc0/10.189/0.38 ms at 50 mV and tc0/31.989/0.92 ms at (/50 mV, suggesting that the channel is voltage dependent.
The minimum number of open and closed states entered byKCG channel can be estimated determining the number ofexponential components necessary to fit the observe open-and closed- time distribution [22]. Open- and closed-timehistograms of the KCG channel in 90% of experiments clearlyrequired only one time constant to fit the points. In remaining10% of experiments second lifetimes-lower than 3 ms weregenerated but they determined not significant (only Â/1%)per cent of all. Such a result points that investigated channelhas only one population of open- and closed times.
Charybdotoxin has no effect on the potassium channel activity upon application to either the cis or trans side (datanot shown).
Figure 3 shows KCG channel activity at holding potential 40 mV in control experimental conditions and after additionTEA' to the trans and cis sides. Experiments wereperformed in ion gradient concentration of 450 mM KCl/150 mM KCl, pH 7.0. 15 mM TEA' applied to the cis sideclearly blocked the channel. The same TEA' concentration Reconstitution of chromafﬁn granule large conductance potassium channel into planar lipid bilayer. (a) Single channelrecordings at different holding potentials in asymmetric ionic condi-tions (450/150 mM KCl, pH 7.0 cis /trans ). Closed levels are markedas c. Recordings were low Á/pass ﬁltered at 200 Hz. (b) Current/voltage relation for single channel recordings in symmetric andasymmetric ionic conditions. The stright line was ﬁtted to experi-mental data; in symmetric 450 mM KCl (I), and in asymmetricconditions 450/150 mM KCl cis/trans (j). The observed single-channel conductances are 4329/9 pS for symmetric and 3609/7 pSfor asymmetric ionic conditions.
Effect of TEA' on single channel activity. Channel selective for cations (the K' Nernstian potential for this ionic recordings at holding potential of 40 mV under control conditions in asymmetric 450 mM KCl/150 mM KCl, pH 7.0 cis /trans ) and with 15 mM TEA' applied to the trans and cis sides as indicated. Closed Probability of opening was lower for single channel levels are marked as c. Recordings were low Á/pass ﬁltered at activity when negative potential was applied to the bilayer. 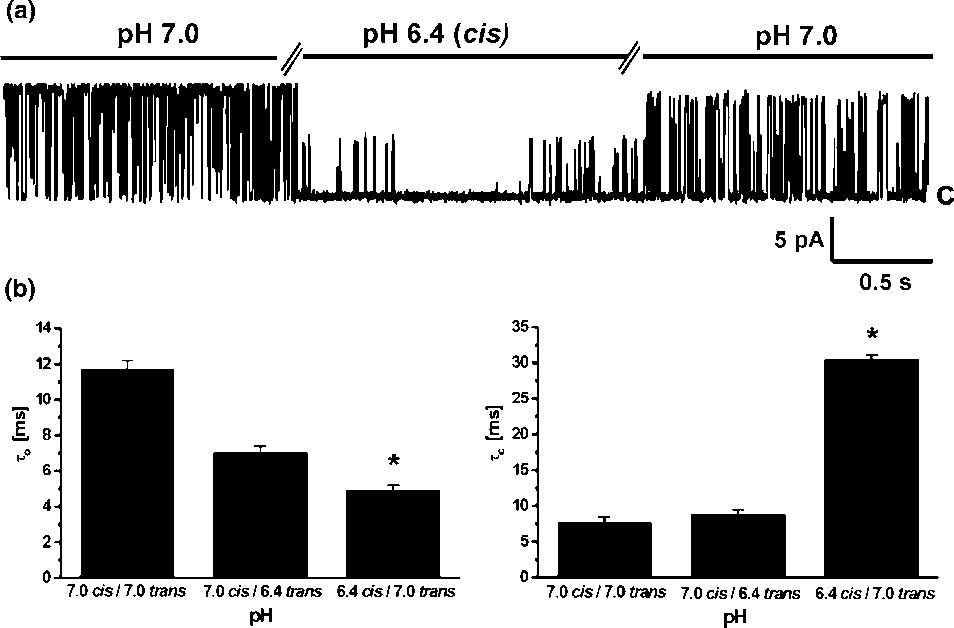 placed into the trans -bilayer chamber results in current increased to tc0/8.89/0.3 ms but after lowering it in the cis amplitude reduction at 20% without changing open prob- side it increased to tc0/30.59/2.9 ms.
ability and gating. These findings pointed on the fact that Lowering of the pH in the cis side resulted in diminishing of TEA'-sensitive channel was located in resealed ‘‘ghost’’ both open probability and the amplitude of opening. Only membranes and its’ sensitivity is higher from the cis side weakinfluence on single channel current amplitude and open named as an intragranular side. These results are consistent probability were observed when pH 6.4 was applied from the with one presented by Ashley et al . (1994).
We performed gating analysis of single channel recording Figure 5 shows the effect of pH on the open probability of in control and after addition 15 mM TEA' to the trans -bilayer the large conductance potassium channel. The significant chamber. As occurred, the calculated open- and closed- difference in probability of opening at the level PopenB/0.05 times stayed unchanged. Open- and closed- times for the (test T-Student) was observed only after lowering pH from large conductance potassium channel at 40 mV in gradient the cis side when compared with open probability at pH 7.0 at both the cis and trans sides as a control. Upon changing o 0/14.339/0.24 ms and tc 0/13.789/1.78 ms in the pH from 7.0 to 6.4 from the cis side the open probability o 0/14.439/0.26 ms and tc 0/9.329/1.74 ms after 15 mM TEA' addition to the trans -bilayer chamber.
decreased from Popen0/0.619/0.21 to Popen0/0.139/0.11.
Regulation of chromaffin granule large conductancepotassium channel by pH Protons influence the behavior a variety of ion channelsincluding potassium channels [23 Á/26]. Unitary conductance Figure 4 shows single channel recordings at holding potential of BK channels is also reduced by protons [27,28]. The of 30 mV after reconstitution of chromaffin granule mem- magnitude of K' current probably is controlled by glutamate branes into lipid bilayers in the gradient of 450/150 mM KCl residues present there [25,29]. Recently, it was shown that (cis /trans ) and kinetic analysis performed for activity of KCG low pH reduced the unitary current in a voltage dependent channel in such experimental conditions. Figure 4 (a) shows manner-increasing with the membrane depolarization [26].
channel recordings after lowering pH from 7.0 to 6.4 only at Heterologously expressed hSlo1 BK channels were also pH- the cis side and again change to the pH 7.0. Open- and closed- time histograms for various pH values of the The value of the presented results and interpretation experimental solution in the trans and cis sides are of the data are due to application of two different transport presented in Figure 4 (b). Considerable differences in the methods reflecting K' conductance in chromaffin granule lifetimes were observed at pH 6.4 at the cis side. In the membranes. The radioactive flux assay, applied in this control pH 7.0 in both compartments the closed lifetime was report, was successfully used to show amiloride-block- tc0/7.79/0.3 ms. After lowering the pH in the trans side it able Na' channels in toad bladder microsomes, and Regulation of chromafﬁn granule large conductance potassium channel by pH. (a) Single channel recording at a holding potential of 30 mV from ‘‘ghost’’ membranes incorporated into bilayer in the presence of gradient 450/150 mM (cis /trans ) KCl and at pH 7.0 or 6.4. A changein channel kinetics at pH 6.4 at the cis side. The pH at the trans side was always 7.0. The closed levels, corresponding to the current through thelipid bilayer, are indicated with c. Recordings were low Á/pass ﬁltered at 200 Hz. (b) Gating analysis of large conductance potassium channelrecordings at different pH. Open- and closed- time analysis of the channel recordings at various pH values at the trans and cis sides. ThepH values at the trans and cis sides are marked below the diagram. The signiﬁcant difference in the time constant values are marked by asterisk.
Mean open- (to) and closed (tc) lifetimes are indicated in ms. Data are means9/SD (n 0/7). 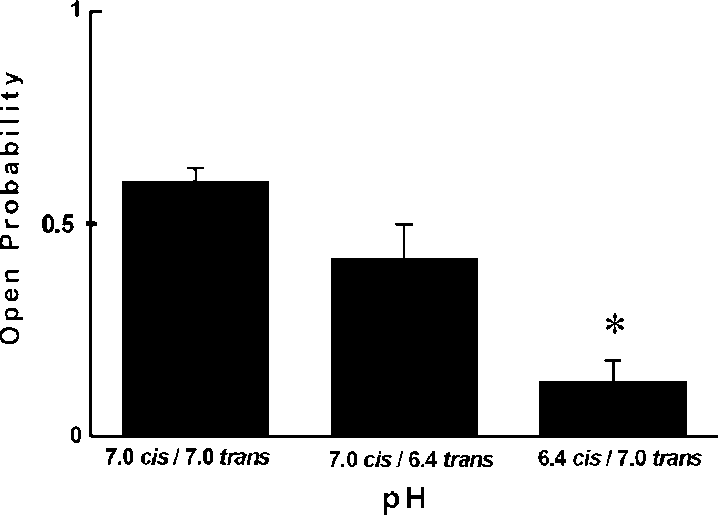 MERCOSUR's offer list to Índia Margins of Product description preference External Observations offered by MS MILK AND CREAM, CONCENTRATED OR SWEETENED-Containing less than 5 ppm of arsenic, lead or copperLEGUMINOUS VEGETABLES, DRIED SHELLED-Other beansDried coconuts shelled, whether or not shreddedCOCOA BEANS, WHOLE OR BROKEN, RAW OR ROASTEDMixes and doughs for the