Dec. 12, 2005
Hung Jury in First Federal VIOXX® Product Liability Trial
WHITEHOUSE STATION, N.J., Dec. 12, 2005 – Merck & Co., Inc. is disappointed a federal court jury in Houston, Texas could not return a verdict in Plunkett v. Merck and is prepared for a retrial, if that becomes necessary. “We presented evidence that there is no medical or scientific evidence showing short-term use of VIOXX increases the risk of heart attack and no evidence that it contributed in any way to the unfortunate death of Richard Irvin,” said Philip Beck, of the law firm of Bartlit Beck, Merck’s lead trial lawyer in the case. “Mr. Irvin only took VIOXX for less than a month. He suffered multiple long-standing risk factors for a heart attack including partially clogged arteries. We believe that Mr. Irvin would have suffered a heart attack when he did, whether he was taking VIOXX or not.” “If a retrial is scheduled we will be right back with the same facts,” said Kenneth C. Frazier, senior vice president and general counsel of Merck. “The VIOXX litigation will go on for years. We have the resources and the resolve to address these cases, one by one, in a reasonable and responsible manner.” The lawsuit was originally filed in Palm Beach County, Florida in May 2003 by Mr. Irvin's surviving spouse, Evelyn Irvin Plunkett. The case was re-filed in the federal Multidistrict Litigation (MDL) as case number 05-4046 in 2005. The MDL is based in federal court in New Orleans; the Plunkett case was tried in Houston because of the effects of Hurricane Katrina. The Judge presiding over the MDL has said he plans to schedule three additional trials on a monthly basis, starting in February 2006. Merck is represented in the Plunkett case by Philip Beck and Tarek Ismail of Bartlit Beck of Chicago. About Merck
Merck & Co., Inc. is a global research-driven pharmaceutical company dedicated to putting patients first. Established in 1891, Merck discovers, develops, manufactures and markets vaccines and medicines in more than 20 therapeutic categories. The company devotes extensive efforts to increase access to medicines through far-reaching programs that not only donate Merck medicines but help deliver them to the people who need them. Merck also publishes unbiased health information as a not-for-profit service. For more information, visit Forward-Looking Statement
This press release contains “forward-looking statements” as that term is defined in the Private Securities Litigation Reform Act of 1995. These statements involve risks and uncertainties, which may cause results to differ materially from those set forth in the statements. The forward-looking statements may include statements regarding product development, product potential or financial performance. No forward-looking statement can be guaranteed, and actual results may differ materially from those projected. Merck undertakes no obligation to publicly update any forward-looking statement, whether as a result of new information, future events, or otherwise. Forward-looking statements in this press release should be evaluated together with the many uncertainties that affect Merck’s business, particularly those mentioned in the cautionary statements in Item 1 of Merck’s Form 10-K for the year ended Dec. 31, 2004, and in its periodic reports on Form 10-Q and Form 8-K, which the company incorporates by reference. May 6, 2005

Congress Probes Merck's Vioxx Sales Tactics
A Congressional committee dug into Merck & Co.'s marketing practices yesterday, trying to determine whether the company's sales representatives misled doctors about the health risks of Vioxx, the pain killer withdrawn from the market last September. While the House Government Reform Committee was grilling Merck executives, the company's CEO, Raymond Gilmartin, was being shown the door. And in Chicago, a law firm said it will file "the first class action lawsuit on behalf of all Italian citizens who allegedly died or were seriously injured" by Vioxx. The Senate has held numerous hearings on the Vioxx matter but yesterday's House session produced a mound of internal Merck documents not previously seen. Among them were written guidelines for "detailers," the sales representatives who visit doctors to promote drug company's products. Merck's detailers were instructed to make eye contact with doctors while firmly shaking their hand. More significantly, when doctors asked about Vioxx' increasing the risk of heart attack and stroke, the detailers were instructed to give them a pamphlet written by Merck's marketing department. The pamphlet claimed that Vioxx was eight times safer for heart patients than similar painkillers. It omitted Merck's only findings that Vioxx produced a fivefold increase in heart attack and stroke risk compared with naproxen, another popular pain killer. On the other hand, Rep. Tom Davis (R-Va.), who chairs the panel, said that a "wide-awake" physician would have known of the increased risks, which had been disclosed in a Merck press release and published in the New England Journal of Medicine.

A New Direction?
Merck's new chief executive, insider Richard T. Clark, said he wants Merck to become a "growth company" once again. Pfizer, GlaxoSmithKline and Novartis all grew larger than Merck during Gilmartin's tenure. Among the headaches Clark has inherited are the thousands of personal injury and wrongful death suits filed against Merck by Vioxx users and the loss of $2.5 billion in annual Vioxx sales. Italian Job
Arriving late at the Vioxx class action ball, a Chicago law firm says it will file a class action lawsuit on behalf of all Italians who died or were injured by Vioxx. "Vioxx should never have been marketed in the first place, in light of the known risks of Cox-2 inhibitors," said attorney Kenneth B. Moll. The representation of Italian consumers was undertaken in cooperation with CODACONS, the non-profit organization established by Italian law with a mandate to safeguard consumers. The lawsuit seeks the establishment of a medical monitoring fund to pay for the testing of Italian consumers for dangerous side effects of Vioxx. MERCK CO INC (NYSE:MRK) Delayed quote data
0.18 (0.53%) 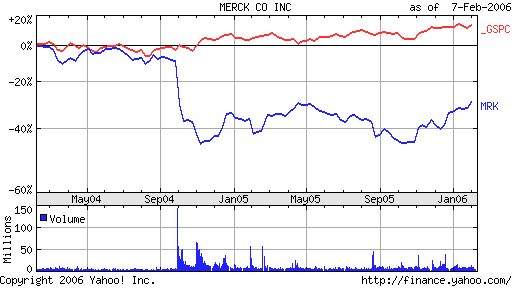 Statement by Kenneth C. Frazier, Senior Vice President and General Counsel Of Merck and Co., Inc. WHITEHOUSE STATION, N.J., Aug. 22, 2005 - Friday's verdict in Texas was a disappointment to all of us at Merck because we know we acted responsibly. WHITEHOUSE STATION, N.J., Sept. 30, 2004—Merck & Co., Inc. today announced a voluntary worldwide withdrawal of VIOXX® (rofecoxib), its arthritis and acute pain medication. From Merck Press Release

S P E C I A L R E P O R T Current Contraceptive Research In making contraceptive choices, couples balance their sex-public health dimensions: Of the estimated 210 million preg-ual lives, their reproductive goals, and each partner’s healthnancies that occur worldwide each year, 40% are un-and safety. The search for a choice that satisﬁes all threeplanned.2 Furthermore, the HIV epidem