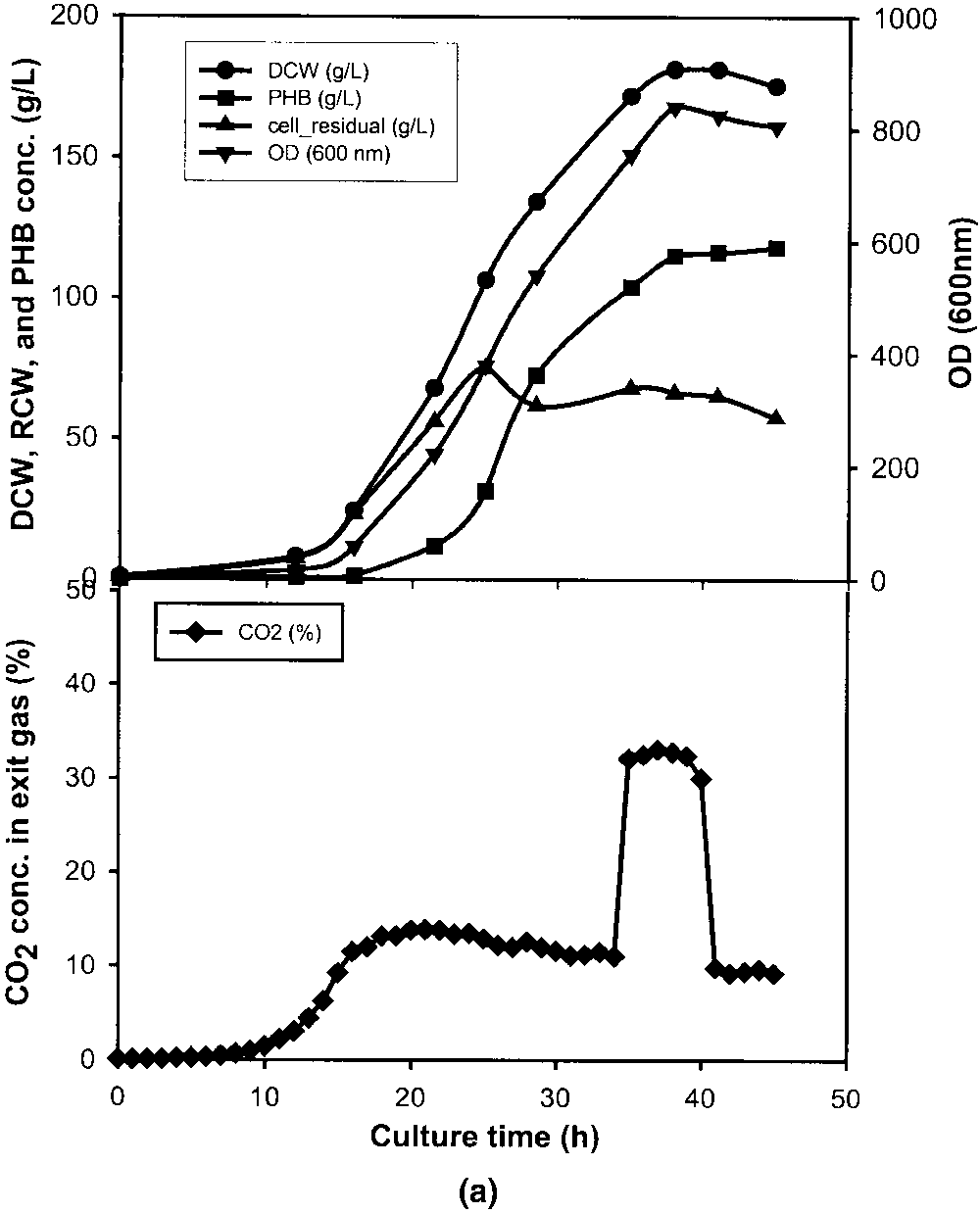 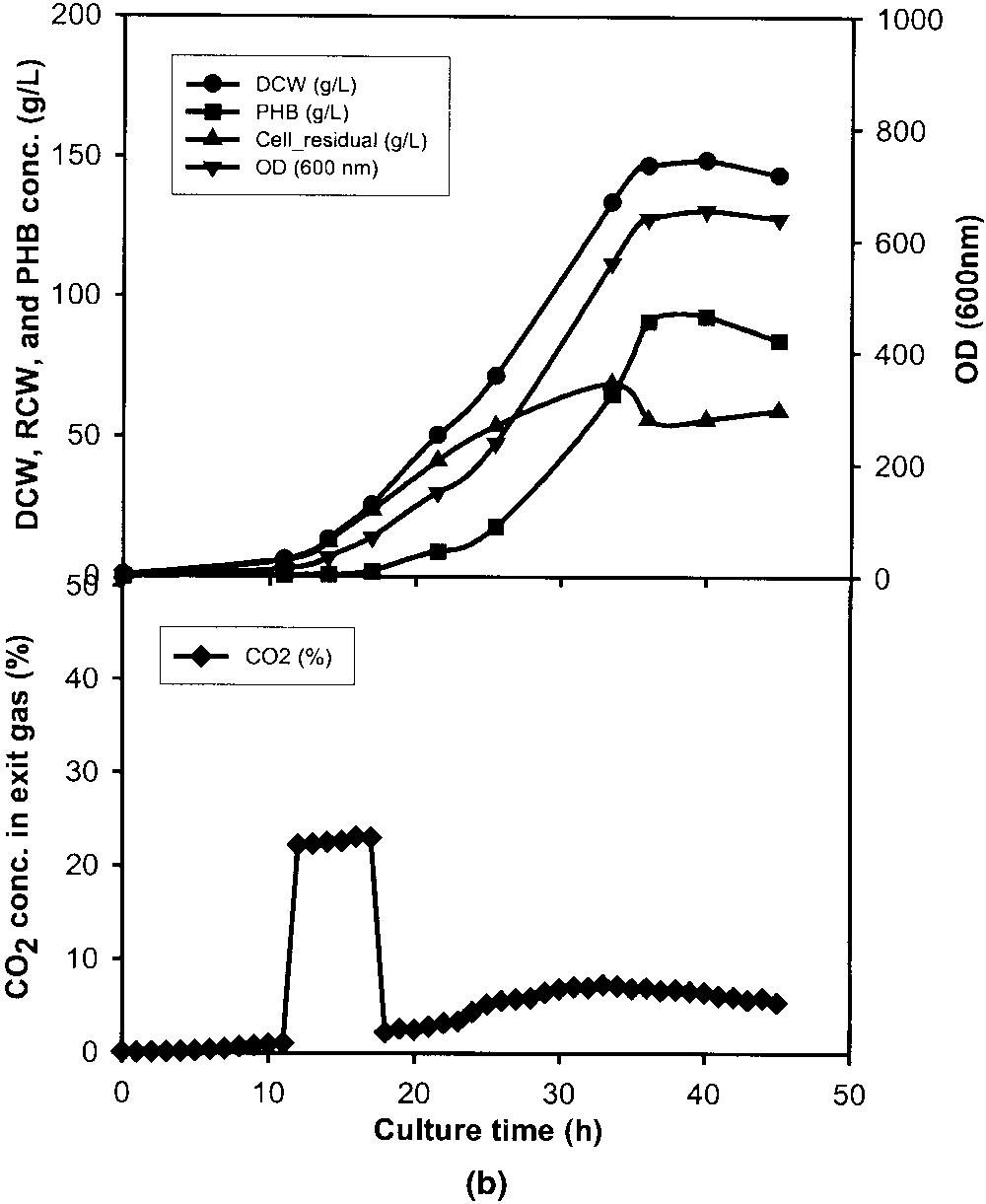 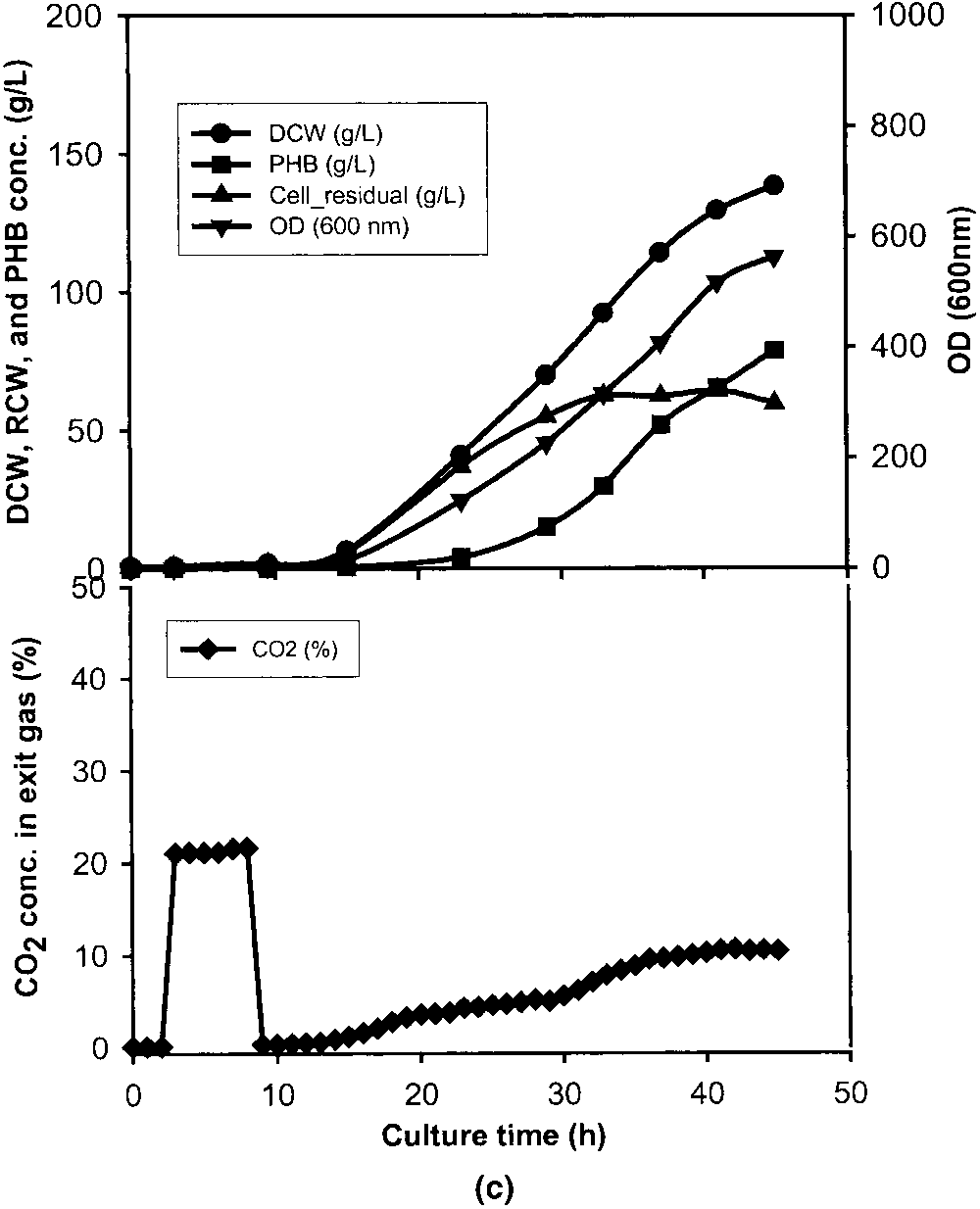 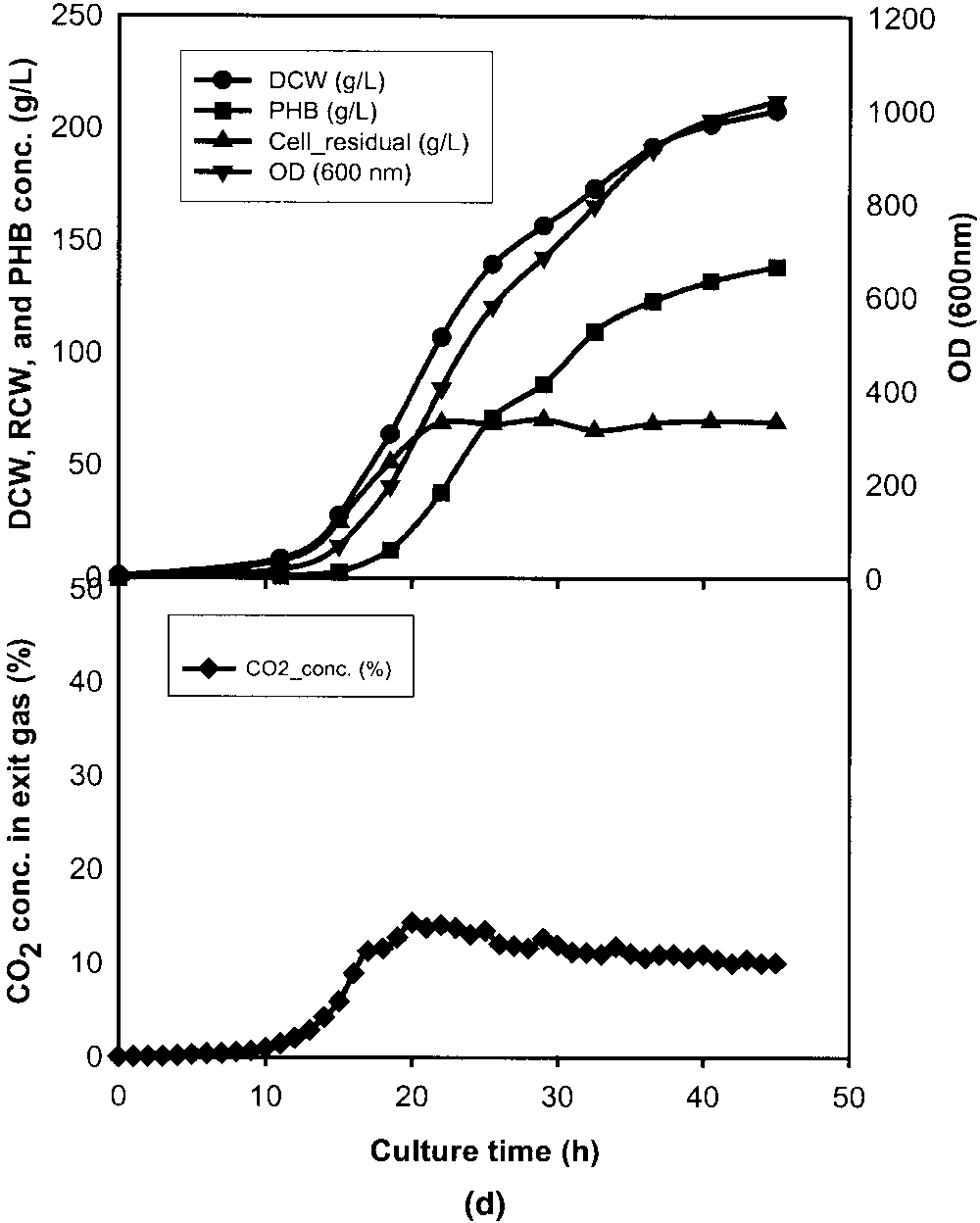 Figure 1.
Time course of OD, DCW, RCW, PHB concentration, and exit CO levels in the fed-batch cultures with a 6-hour CO pulse (22%) at a defined cell growth stage. a: Stationary stage between 34.5 and 40.5 h. b: Early exponential stage between 11 and 17 h. c: Lag stage between 3 and 9 h. d: Standard
culture without CO pulse. OD (᭢), DCW (᭹), RCW (᭡), PHB conc. (᭿), and exit CO conc. (ࡗ).
SHANG ET AL.: CO INHIBITION ON FED-BATCH CULTURE culture of R. eutropha was done with no CO Figure 1a shows the time course of OD, DCW, RCW, PHB, and exit CO concentrations of the fed-batch culture A 3-h CO pulse was added into the fermentor at exponen- with a CO pulse introduced in the stationary stage. During tial phase to see the effect of CO pulse lasting time in the 6-h CO pulse, the OD and DCW increased only a little comparison with the 6-h CO pulse (Fig. 2). The early ex- in the beginning. The CO concentration in the exit gas was ponential phase was chosen to introduce the CO pulse about 33% (v/v) during the CO pulse and it maintained at since a large amount of CO would be produced at this about 9% (v/v) thereafter. The decrease of OD and DCW may be attributed to the damage of cells caused by the During the CO pulse, the CO concentration was about temporarily elevated CO concentration in the solution 23% (v/v), which is similar to the case of the 6-h CO pulse.
(Dixon and Kell, 1989; Jones and Greenfield, 1982; McIn- After 25 h, the CO concentration was almost constant at tyre and McNeil, 1997a, 1998). After the CO pulse, the cell 10% (v/v). The final DCW and PHB concentration reached metabolic activity did not recover in the following 4 h. As 175 and 117 g/L, respectively; concentrations that are much a result, the final DCW and PHB concentration amounted to higher than those obtained in the case of the 6-h CO pulse 176 and 118 g/L, respectively, which are lower than the (Fig. 1b). This shows that the pulse duration of CO has a DCW (208 g/L) and PHB concentration (138.7 g/L) ob- strong effect on cell growth and PHB accumulation. The longer the pulse duration, the stronger the inhibition of CO2 Figure 1b shows the inhibitory effect of a CO pulse at on cell growth and production formation was found to be. In the exponential phase. Although the maximal CO concen- the culture of A. niger, the CO inhibition on cell growth tration in the exit gas was just about 23% (v/v), lower than and critic acid synthesis also increased with the CO pulse the 33% (v/v) mentioned above (Fig. 1a), the cell growth and PHB accumulation were severely influenced. During Another 3-h pulse of 10% (v/v) CO in pure oxygen was the CO pulse, the DCW and PHB concentration only in- introduced at the early exponential phase to see the effect of creased from 6.5–26 g/L and 0.8–2 g/L, respectively, as CO concentration on the fermentation process (Fig. 3). The compared with the DCW increase of 7–48 g/L and PHB CO pulse lasted only for 3 h and the maximal CO con- change of 0.6–6 g/L in the standard culture. After the CO centration in the exit gas was about 11% (v/v). Finally, it pulse ceased, the DCW and PHB concentrations increased maintained at a constant value of 9% (v/v), and lasted about continuously for 20.5 h, but did not increase further. The 20 h, which is very similar to the result obtained with the RCW continued to increase to 69 g/L in 34 h, which was 3-h CO pulse with 22% (v/v) CO in pure oxygen (Fig. 2).
obtained generally in about 22–24 h without a CO pulse.
The final DCW (190 g/L) and PHB concentration (122 g/L) This means that the average cell growth rate decreased to were much higher than those obtained in the 3-h 22% (v/v) CO pulse. From the results shown in Table IV, we can see The lowest DCW and PHB concentrations were obtained the CO inhibition in the cultures of P. chrysogenum, Z. with a CO pulse in the lag stage between 3–9 h (Fig. 1c).
mobilis, and S. cerevisiae also increased with the increase of The final DCW and PHB concentration just reached 138 CO concentration. All these clearly showed that the higher and 78.8 g/L, respectively. In this case, it took more than 30 the CO concentration, the stronger the inhibitory effect of h when the RCW reached its maximal value. After the CO CO on cell growth and production formation was.
pulse ceased, the cell growth and PHB accumulation were The efficient way to prevent CO inhibition is to lower still slow. It can be said that the lag stage, in which the the exit CO concentration from a fermentor by either in- productivity of PHB is the lowest (Table III), is the stage creasing the gas flow rate or supplying inert gases into the most sensitive to the CO pulse with 22% (v/v) CO in the fermentor. In the former case a waste of pure oxygen is influent gas stream. A similar result was found in the culture expected and in the latter case it will result in a low O2 of A. niger (McIntyre and McNeil, 1997c).
Table III.
Summary of the experimental results in the fed-batch cultures with CO pulses.
BIOTECHNOLOGY AND BIOENGINEERING, VOL. 83, NO. 3, AUGUST 5, 2003 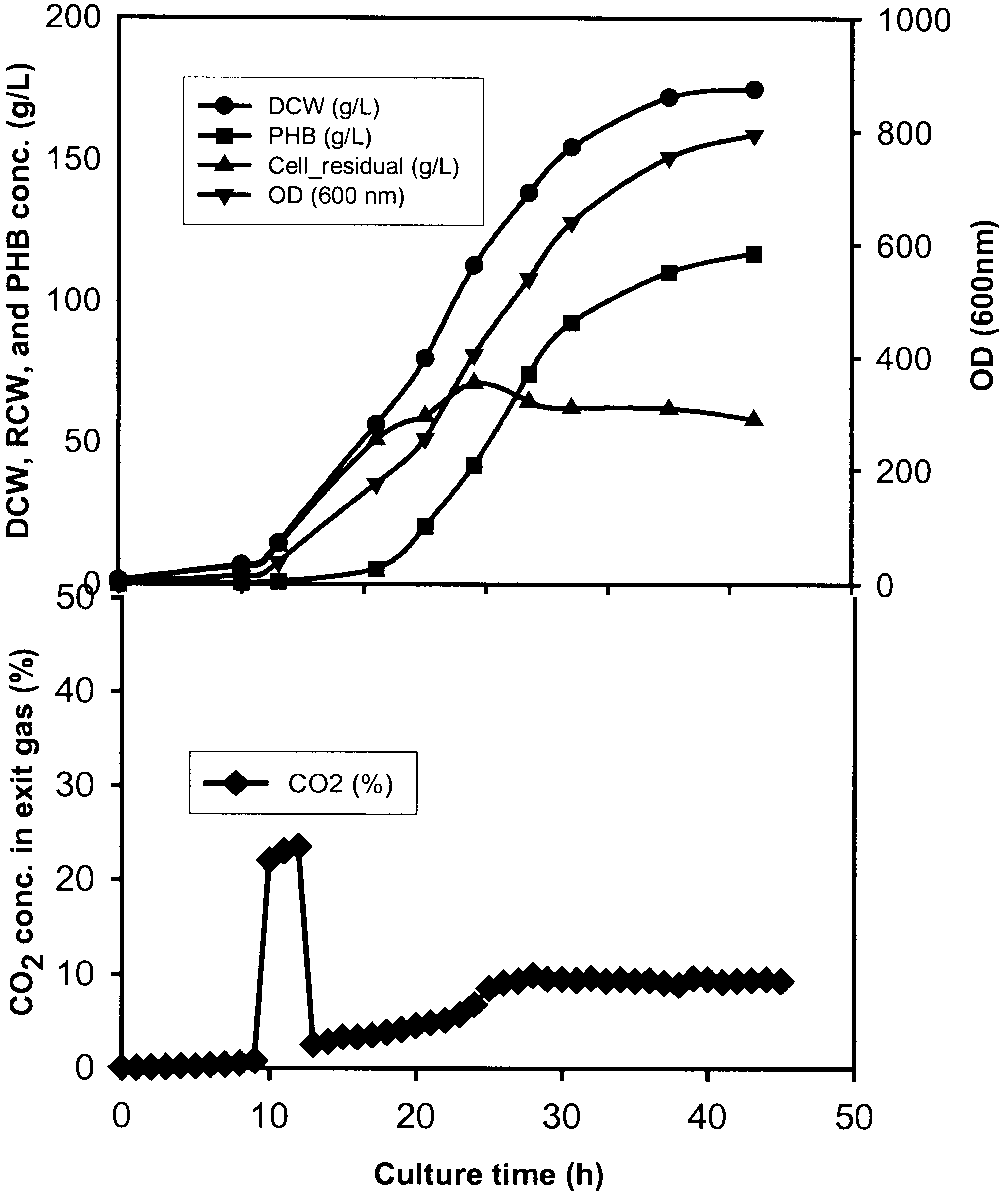 Figure 1d shows that the maximal CO concentration in exit gas from a 5-L fermentor was about 15% (v/v) when thegas flow-rate was 1.0 vvm based on the initial liquid vol-ume. In a 30-L fermentor, the maximal CO concentration in exit gas was 14.2% (v/v) (as shown in Table II). At thegas flow rate of 0.42 vvm the maximal CO concentration from a 5-L fermentor reached 30.2% (v/v). In a pure oxygensystem, enough oxygen is always present in the liquid mediaand Monod constant or critical oxygen concentration foroxygen is less than 1 mg O /L. It is unlikely that the oxygen uptake is transport-limited rather than reaction-limited. Inthis case a higher CO concentration will occur at a lower Autogenous CO on the PHB synthesis and cell growth.
2
In a large-scale industrial fermentor it is likely that the CO2 concentration would be higher than that in a small-scalefermentor because of increased hydrostatic pressure (Onkenand Liefke, 1989). It is very important to choose a suitablemethod to simulate the conditions in a large industrial fer-mentor for the estimation of CO effect on microorganisms.
McIntyre and McNeil (1997c) reported that the previousexperimental method of continuous CO -enriched gassing of batch cultures from time zero may lead to a systematicoverestimation of CO inhibitory effects on mycelia organ- isms and proposed a CO pulse method. The results ob- Figure 2.
Time course of OD, DCW, RCW, PHB concentration, and exit tained in the CO pulse method clearly show that two pa- CO levels in the fed-batch culture with a 3-h CO pulse (22%) in the early rameters, CO concentration and pulse duration, play a key exponential stage between 10 and 13 h. OD (᭢), DCW (᭹), RCW (᭡), role in the estimation of CO inhibitory effect. However, PHB conc. (᭿), and exit CO conc. (ࡗ).
these two parameters are chosen artificially, which may leadto no conclusive reasoning on how the result of a pulse testis related to real experimental conditions. Another problem Effect of CO Produced Autogenously by Cells in the CO pulse method is the sudden increase of the CO General CO production pattern during aerobic fermen-
concentration that could not occur in actual fermentation 2
tation. Microbial cells can release or utilize CO . Both CO
productions in the ethanol fermentation by Saccharomyces Here we propose a new method to place microbial cells cerevisiae or Zymomonas mobilis and CO utilization for under a higher CO concentration just by lowering the gas PHB synthesis by R. eutropha in the presence of H are prod- flow rate, without the necessity of introducing CO artifi- uct-related (Veeramallu and Agrawal, 1986; Ishizaki et al., cially. As shown in Figure 4, the maximal CO concentra- tion reached 30.2% as the gas flow rate was maintained at 2001). If it is respiration-related, one mole of CO is produced 0.42 vvm. The final DCW (168 g/L) and PHB concentration per mole of organic carbon oxidized. Since R. eutropha is (97.2 g/L) decreased by 18.8% and 29.9%, respectively, as aerobic, CO will come from metabolic oxidation of glucose.
compared with the results obtained in the standard culture CO production per liter of the culture broth depends on (Fig. 1d). Also, the cell growth rate decreased by 39% when cell concentration in terms of g/L (X) and its specific meta- the CO concentration was at its maximal value (30.2%).
These decreases in DCW, PHB concentration, and cell growth rate were attributed to the inhibitory effect of theCO produced by cells themselves. During the lag phase less inhibition occurred because of the low CO concentra- tion, but during the exponential and stationary phases severe During fermentation with a gas flow rate of 0.42 vvm, it exponentially. At some point of this logarithmic phase oxy- was clear that the inhibitory effect of CO was higher than gen supply from air is not sufficient and thus pure oxygen is that in the case of a 3-h 22% CO pulse, but lower than that will increase and reach a maximum at the end in the case of a 6-h 22% CO pulse. The maximal CO of this phase. As the fermentation enters the stationary concentration lasted for 6 h and showed a pattern of cell phase, microbial product synthesis are induced, Q growth and CO inhibition. This technique is essentially a natural combination of pulse and continuous injection tech- SHANG ET AL.: CO INHIBITION ON FED-BATCH CULTURE BIOTECHNOLOGY AND BIOENGINEERING, VOL. 83, NO. 3, AUGUST 5, 2003 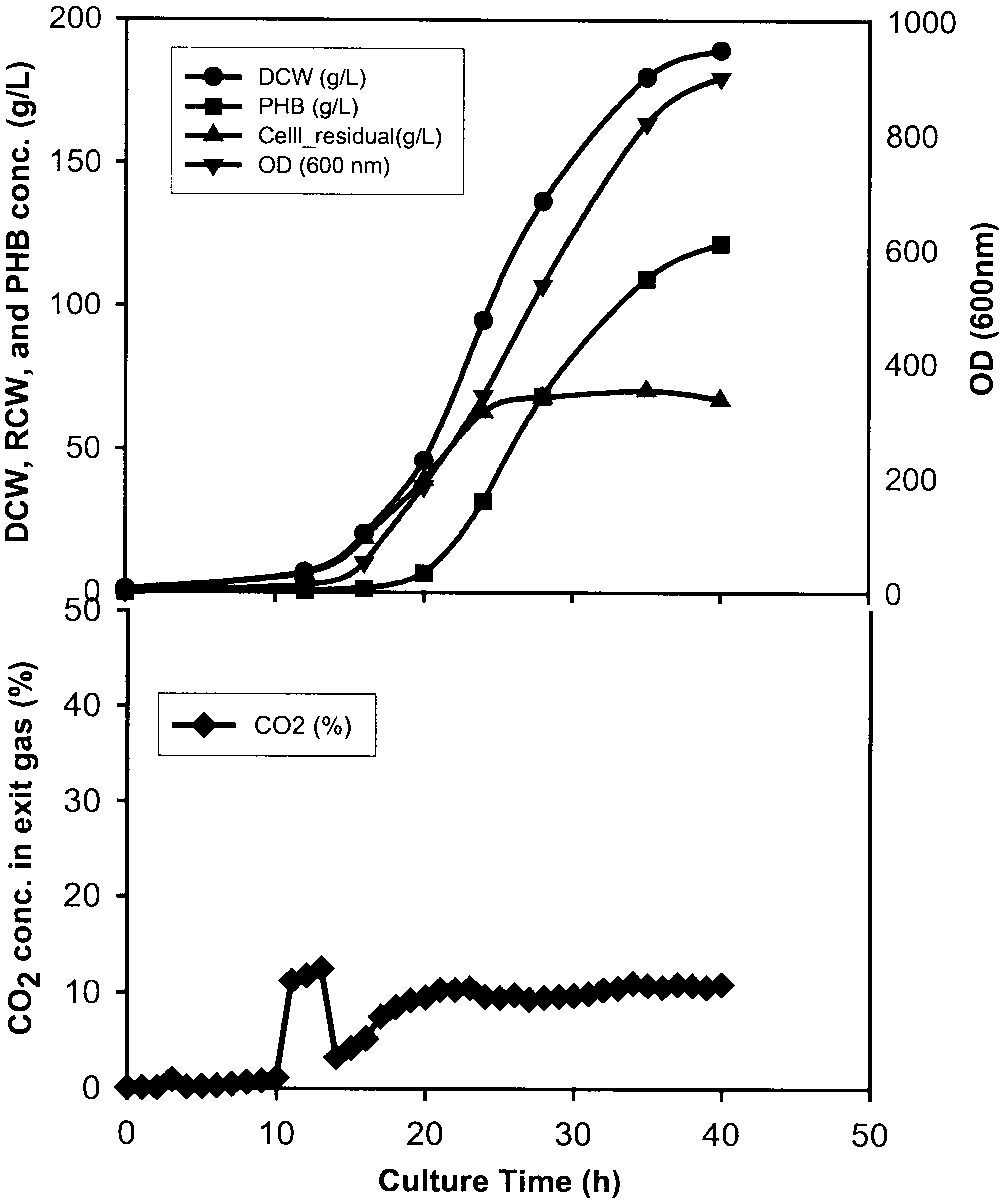 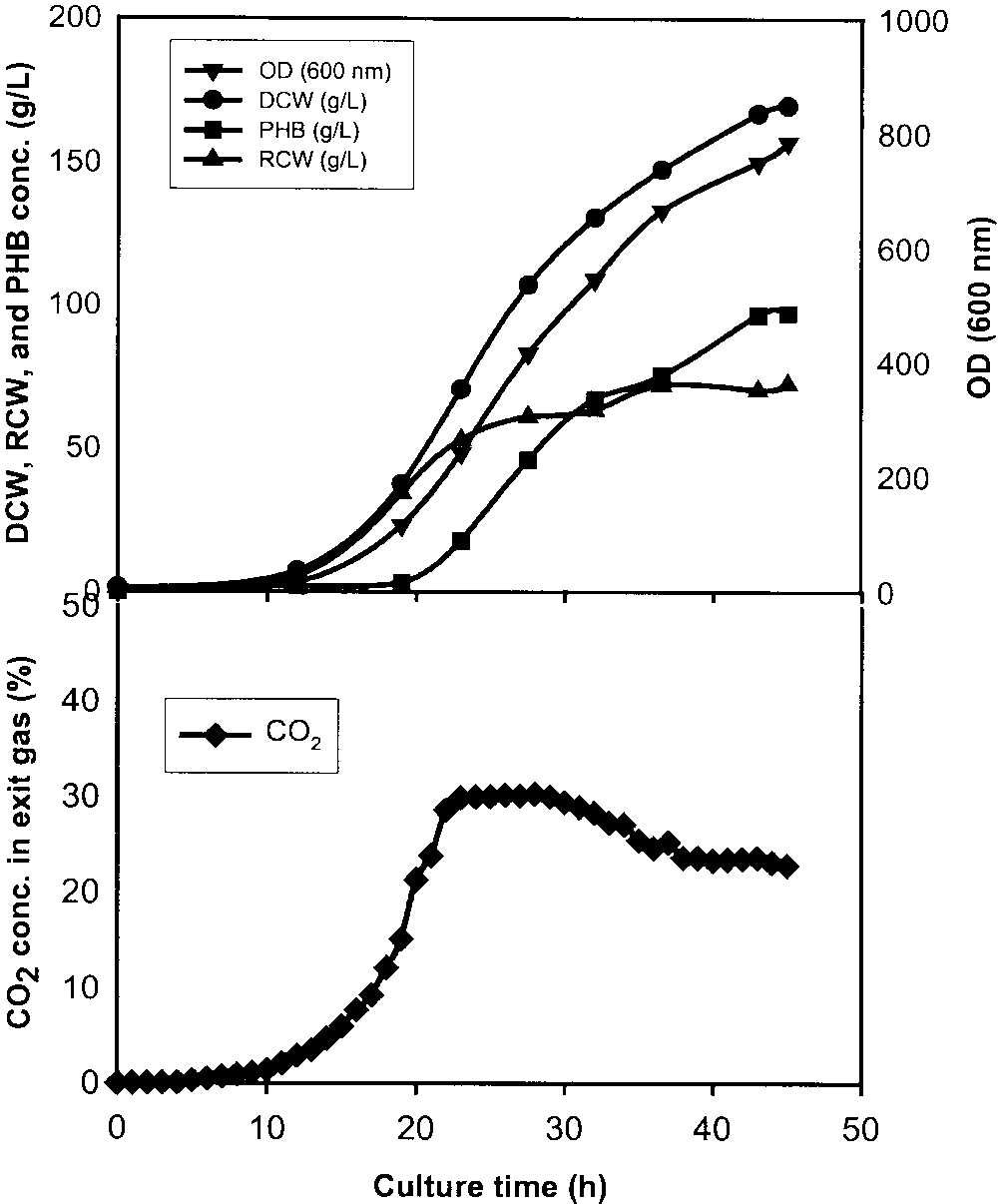 British and American Pronunciation Snezhina Dimitrova In 1877, the British philologist Henry Sweet said that within a century “England, America, and Australia will be speaking mutually unintelligible languages owing to their independent changes of pronunciation.” Fortunately, this grim prediction did not come true. Still, more than 300 million people in the world today speak English