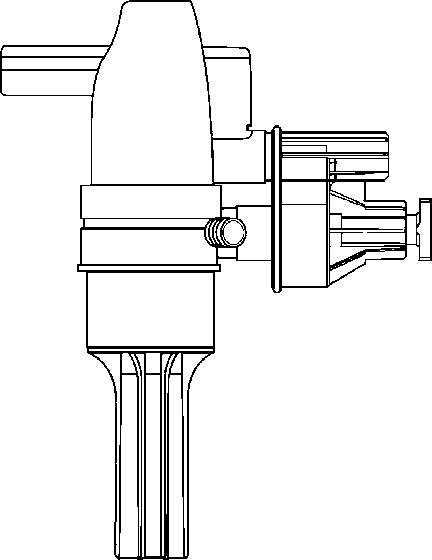 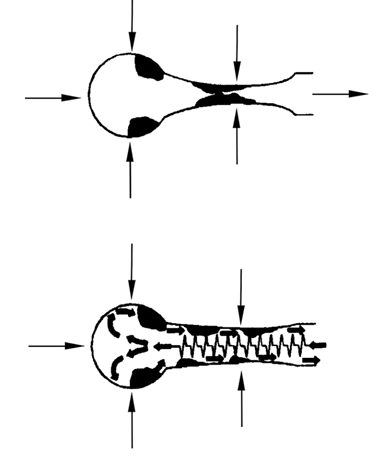 P-NEB User’s Guide
Functional and Operational Characteristics
The PercussiveNEB is an intrapulmonary percussive treatment device that
incorporates a nebulizer to deliver aerosolized medication and is designed to
oscillate during exhalation and inhalation to help remove endobronchial se-
cretions. During inhalation, the patient entrains high density aerosol from the
nebulizer with high frequency intrapulmonary percussion for enhance aerosol
deposition. The moisture and the medication in the aerosol help thin and
mobilize secretions. During exhalation the pneumatic capacitor and pulmo-
nary modulator cycle to deliver high frequency (typically 11-30 Hz) pressure
bursts to provide an effective intrapulmonary percussion treatment. The high
frequency pressure bursts are identical to those delivered by a high fre-
quency ventilator.
The bursts or boluses of gas serve to mobilize secretions by creating a gasbolus velocity profile that travels down the center of the bronchial airways(Figure 1). This causes escaping or exhaled gas to travel at high speedsalong the wall of the bronchial airways imparting a sizeable force on bronchialsecretions moving them up and out of the airways.
The P-NEB is designed to oscillateduring inhalation for better aerosol help increase the speed of gas alongthe walls of the bronchial airways.
The pressure bursts also serve tointermittently squeeze the lymphsystem within the lung increasingthe flow rate at which fluids areprocessed through the lymph sys- P-NEB User’s Guide
Functional and Operational Characteristics
OPERATIONAL CHARACTERISTICS
Suitable patient body weight . Greater than 10 kgTypical percussive oscillation frequency . Up to 30 Hz (1800 per minute)Device flow . 43 to 73 L/minFractional inspired Oxygen (FiO ) . Greater than 80% when Operating environmental limits . 5 to 40° CStorage environmental limits . -20 to 60° CPatient connection . MouthpieceGas inlet . DISS connectionNebulizer reservoir size . 20 mLApproximate dimensions . 10" x 8" x 3.5"Approximate weight . About 190 grams Clinical Considerations
The P-NEB is intended to be used only on those patients who are able tobreathe spontaneously. The P-NEB is intended to be used with the attachedmouthpiece. If a corrugated tube is connected between the mouthpiece andthe patient, the pressure bursts received by the patient would be muchweaker and dramatically less effective.
The P-NEB requires some coordination and training. On inhalation, the pa-tient should be encouraged to inhale as deeply as possible. On exhalation,the patient should be encouraged to exhale slowly and for as long as possible.
Because the pressure bursts provide some measure of ventilatory support,patients will usually be comfortable exhaling for longer period of time. Ini-tially, some patients may be tense so the P-NEB may not oscillate as desired.
However, as the patient relaxes during exhalation, the P-NEB will be able tofunction properly. Every patient is different so adjustment of flow and pres-sure settings, training, and good clinical judgment are all important.
Some patients will allow their cheeks to puff out with each pressure burst ofthe P-NEB. This should be strongly discouraged because it reduces the pres-sure effect reaching the lungs.
The P-NEB nebulizer may be filled with up to 20 mL of liquid. Physiciansshould select medication carefully to achieve optimal benefits. In any event,it is important that the patient receives moisture during the treatment. 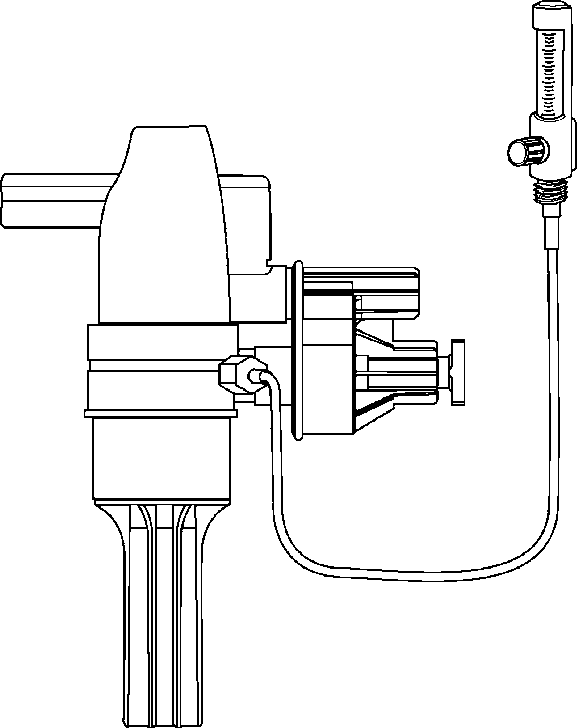 P-NEB User’s Guide
Clinical Considerations (continued)
The P-NEB nebulizer has an output during inhalation of approximately 1 mL/ min which depends on the patient’s inhalation efforts. It is recommended that the P-NEB reservoir be filled with 1 mL of inhlation solution for every minute of aerosol treatment. Because on exhalation, when the patient should not be receiving any aerosol, the output is much less. Therefore, the average output during the entire treatment will be less than 1 mL/min. Using 20 mL in the nebulizer reservoir, there will generally be residual liquid left The gas flow required to operate the P-NEB is typically about 60 L/min. This depends on the patient and the frequency desired. Generally, more airflow will increase the frequency. The most common flowmeters are 15~16 L/min float type flowmeters (Timeter, Puritan Bennett, etc.). When these flowmeters are opened all the way, the float (ball) appears to ride just above the 15~16 L/min mark but in fact is delivering a much higher flow when connected to a P-NEB. In general, the clinician may vary the flow to what- ever value is desired. If the P-NEB is oscillating primarily during exhalation at an acceptable frequency, then the P-NEB is receiving the appropriate flow.
The PercussiveNEB improvements in ease of use, durability, dependability, and performance attributes has resulted in a device that is more user friendly, reliable, and is adjustable to patient needs. The PercussiveNEB’s pressure dial allows users to set airway pressure oscillation amplitude for individual comfort. It is also quieter, able to oscillate over a wider frequency & pressure range, and is easier to operate within the source flow range. The 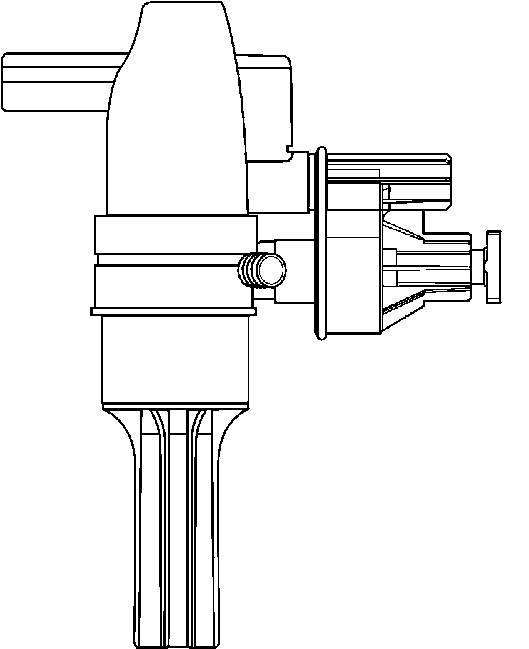 P-NEB User’s Guide
Clinical Considerations (continued)
The percent time a positive pressure burst is being delivered to the patient per oscillation is 25-33%. This is equivalent to an I:E ratio ranging from 1:3 to 1:2. This ratio is important because it allows sufficient time for lung and lymph tissue to return to its resting state between pressure bursts.
The volume of gas delivered per pressure burst ranges from 35 to 75 mL, depending on frequency and flow rate. The pneumatic capacitor is designed to prevent more then 75 mL per pressure burst, regardless of the patient or When using medication with the P-NEB Nebulizer, the clinician should first add the desired medication to the reservoir and then top off to 15 to 20 mL by adding the necessary volume of saline or respiratory quality water. Treat- ment times are typically 15 to 20 minutes.
It is important when reassembling the P-NEB to screw the nebulizer cap on securely and press the modulator into place firmly. If large leaks exist the P- The P-NEB may be used with compressed air or oxygen. The P-NEB may be cleaned by washing with mild soap (detergent) followed by rinsing with water and allowing to air dry (see instructions).
Nebulizer Top
Modulator
Mouthpiece
Nebulizer reservoir (with
Amplitude
baffle inside)
P-NEB User’s Guide
III. Protocol: Setup Instructions - PercussiveNEB
(HIGH FREQUENCY INTRAPULMONARY PERCUSSIVE NEBULIZER)
Use of the intrapulmonary percussive nebulizer in an acute care hospi- tal setting. This policy is intended for patients meeting clinical indica- tions for use of the percussive device. This policy is further intended for use by licensed hospital personnel trained in the use of aerosol/ pressure delivery devices. This policy is applicable only upon individual physician order, or with established medical staff approved clinical protocols. For additional information, refer to the manufacturer’s oper- To provide clinically appropriate recommendations for the use of the P- NEB device, including clinical indications, device set-up, bedside appli- cation, potential hazards, and documentation.
Clinical Logic (New Device Policy)
Intrapulmonary Percussive Ventilation is a form of physical therapy, administered to the Pulmonary Airways by a pneumatic device called a “High Frequency Intrapulmonary Percussive Device” (PercussiveNEB).
The patient breathes through a mouthpiece which delivers preset driving pressure and frequency. The PercussiveNEB automatically triggers during exhalation to provide intrapulmonary percussion at 11 to 30 Hz (660 to 1800 cycles per minute). The PercussiveNEB delivers PEEP at 2 to 8 cm H O, aerosol rate during inhalation of 1 mL/min, with aerosol particle size distribution of 2 to 4 mm MMAD. During the per- cussive bursts of air into the lungs, a continued wedge pressure is maintained, while a high velocity inflow opens airways and enhances endobronchial secretion mobilization. Moreover, the P-NEB is a dispos- able unit that is useful in such areas as Isolation and Nuclear Medicine.
P-NEB User’s Guide
Protocol: P-NEB (continued)
Procedure
Mobilization of retained endobronchial secretions Contraindications
5.1.2 acute or high potential of pulmonary hemorrhage 5.1.3 not for patients receiving continuous ventilation 5.2.3 cardiovascular insufficiency (reduces coronary perfusion) Effective therapy is accompanied by potential risks. The thera- pist must be sensitive to potential hazards that may be recog- nized early and prevented. IPV therapy should normally be discontinued when the patient has received the optimum thera- peutic benefit, or when the patient has become fatigued or has requested discontinuation. Therapy must be discontinued if there is any equipment malfunction, and the physician called immediately if any complications arise.
Intrapulmonary percussive ventilation treatment will be immedi- ately discontinued and the physician immediately contacted if the patient demonstrates any of (but not limited to) the follow- 6.2.3 any sign of hypertension or hypotension 6.2.5 any indication of allergic reaction to the medicine, diluent, 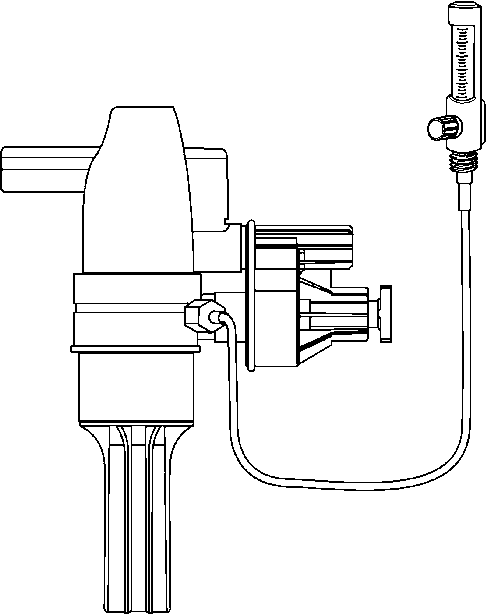 P-NEB User’s Guide
III. Protocol: P-NEB (continued)
6.2.6 increased HR > 20 beats/min from baseline value 6.2.7 decreased SpO < 92%, or increasing FI O requirement with 6.2.9 increase in abdominal distention or discomfort 6.2.10any unexpected increase in hemoptysis 6.2.11onset of dysrhythmia during therapy 6.3.2 Nippled oxygen tubing (comes with device) 6.4.1 Remove PercussiveNEB from packaging.
6.4.2 Place prescribed amount of medication into nebulizer and dilute with saline to obtain desired total volume of liquid.
NOTE:The aerosol output of the PercussiveNEB is dependent on the patient’s breathing pattern. The patient entrains air through the nebulizer during inhalation allowing for the maximum dose of medication. There should be 1 mL of fluid in the nebulizer reser- voir for approximately every 1 minute of treatment. (NEBULIZER 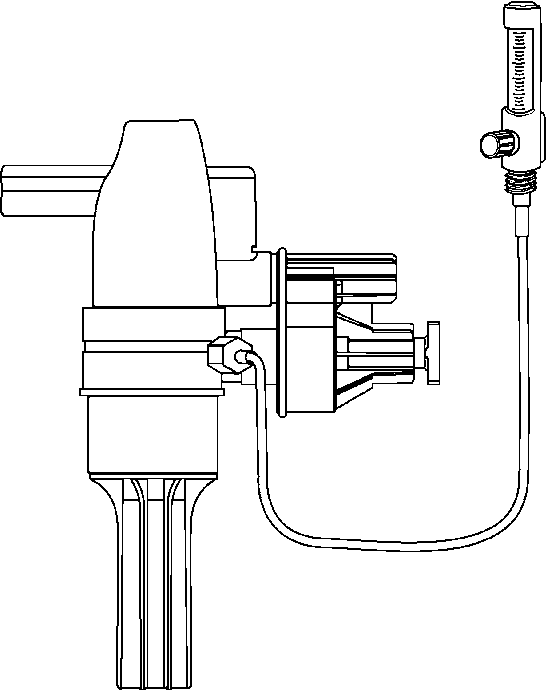 P-NEB User’s Guide
III. Protocol: P-NEB (continued)
6.6.1 Explain the purpose and rationale to the patient/family prior to initiating treatment. Continue to assess/supplement the patient’s understanding of the therapy at subsequent treat- 6.6.2 Position the patient in an upright, comfortable position, and provide appropriate supplemental O as indicated to keep Sp O 6.6.3 Patient pre-treatment assessment will include full “Respiratory Care Assessment” with subsequent reassessment q day.
6.7.1 Perform a FUNCTIONAL CHECK by occluding the mouthpiece and adjusting flow until oscillation begins. Patients will require DO NOT use if device fails to oscillate.
The normal flow rate for PercussiveNEB is 60 L/min (+ 25%). The majority of the flow is used for operating the internal components and is not delivered to the patient.
6.7.2 Place the mouthpiece in patient's mouth. Instruct the patient to breathe through the mouth, not the nose. Best results are achieved when the patient is relaxed and breathing normally.
The PercussiveNEB will oscillate during exhalation and inhala- 6.7.3 Adjust flow rate as required until the modulator piston is heard or seen to be oscillating during exhalation. For best results, adjust the flow to accommodate patient's comfort and breathing ADJUST FLOW RATE 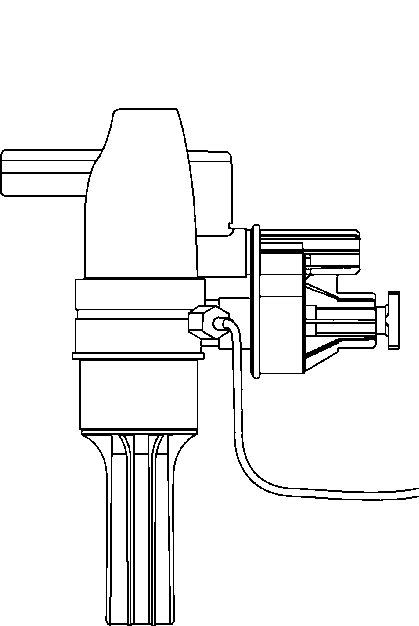 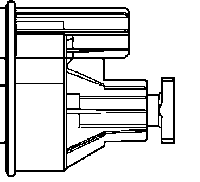 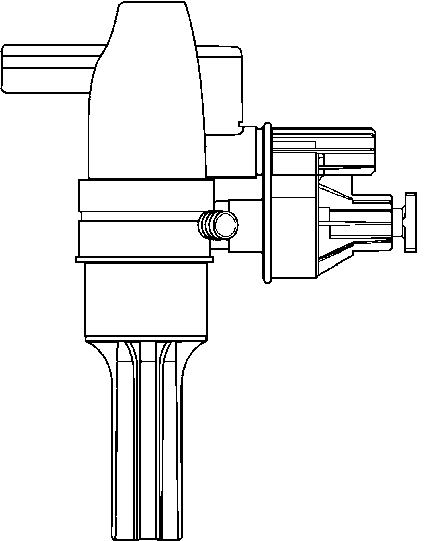 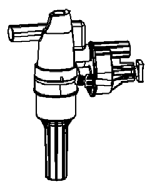 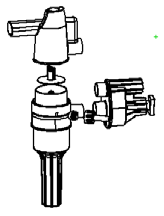 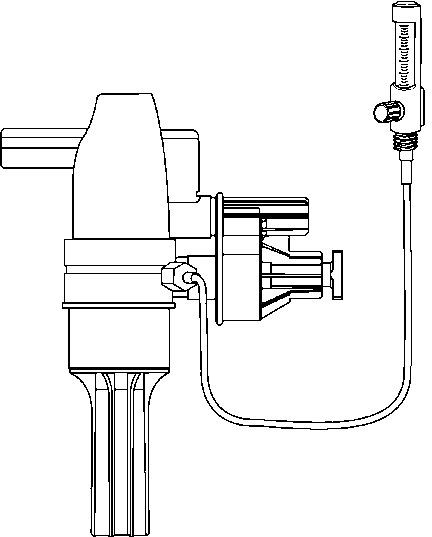 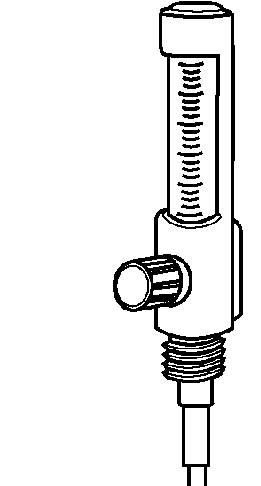 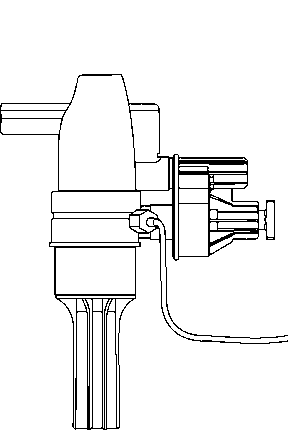 P-NEB User’s Guide
Quick Guide
1 Add medication
the baffle is in place. Place 1 mL solution mL in 20 minutes with 3-5 mL of residual.
2 Connect tubing
3 Set desired flow
4 Begin patient treatment and
Step 4 - Instruct the patient to create a seal around the mouthpiece and breathe through the mouth, not the nose.
The P-NEB will cycle during inhalation and exhalation.
5 Adjust amplitude and flow
for the desired frequency
Step 5 - Adjust the amplitude
ENLARGED
VIEW
This Quick Guide is intended to help you gain a general understanding of the PercussiveNEB product. Pleasebe certain to read, understand, and follow the information listed in this User’s Guide before using this product.
2008 - VORTRAN Medical Technology 1, Inc., Sacramento, California U.S.A.

APPROVAL DATE EFFECTIVE DATE REVISION   05/01/11   INTRODUCTION Prior to commencing work involving carcinogens, chemotherapeutics or other hazardous drugs, the Principal Investigator must perform a hazard assessment in order to identify the proper personal protective equipment (PPE) and engineering requirements for handling hazardous compounds. A key element of the risk