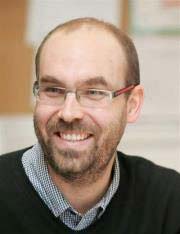 Muscle spasms in ALS and PLS: understanding the
mechanisms and treating the symptoms
Investigator: Luc Dupuis, Strasbourg, France
Grant: 193 000€
Project duration: three years
Spasticity is one of the major signs of upper motor neuron involvement in ALS and one of its consequences is the occurrence of muscle spasms in some patients especially in the upper motor neuron predominant form of ALS: Primary Lateral Sclerosis (PLS). Such muscle spasms might be painful, and there are only few treatment options most notably physiotherapy. To date, no pharmacological treatment for muscle spasms has been specifically Recent research has shown that spasticity occurring after spinal cord injury (SCI) was due to alterations in a neurotransmitter called serotonin. While transection of serotonergic axons in SCI appears a reasonable cause of spasticity, no such mechanism has been identified in ALS- related spasticity. We have recently observed that platelet serotonin levels were significantly decreased in ALS patients and that platelet serotonin levels were positively correlated with survival of the patients. Furthermore, our preliminary evidence indicate that serotonergic neurons degenerate in ALS patients, that serotonin levels are decreased in the spinal cord of ALS mice before disease onset and that that the drug cyproheptadine has potent anti-spastic activity in ALS mice. In all, our previous and current results show that loss of serotonin neurons is a likely cause of spasticity in ALS and PLS. (i) understanding the mechanisms leading to serotonergic degeneration and subsequent muscle spasms in animal models. For this, we will perform genetic, pharmacological, molecular and electrophysiological experiments that will enable us to define how serotonin loss leads to muscle spasms in ALS mice.

(ii) translating our findings into a pilot clinical trial to evaluate the effect of cyproheptadine on muscle spasms in patients. We aim to perform a double-blind, randomized, placebo controlled clinical trial with a cross-over design of cyproheptadine in ALS patients with The research will be conducted both in Strasbourg and in Ulm, the project being built upon complementary expertises in Strasbourg (mouse experiments) and Ulm (clinical trial). Luc Dupuis is senior researcher at Inserm U692 in Strasbourg in France and guest professor in
Neurology at the University of Ulm in Germany.
His five major contribution to publications are:
Dupuis L, et al. Safety and efficacy of pioglitazone in combination with riluzole in amyotrophic
lateral sclerosis: a randomized, double blind, placebo-controlled trial Braunstein KE et al. A point mutation in the dynein heavy chain gene leads to striatal atrophy and compromises neurite outgrowth of striatal neurons. Hum Mol Genet. 2010 Nov
Dupuis L, et al., Muscle mitochondrial uncoupling dismantles neuromuscular junction and
triggers distal degeneration of motor neurons. PLoS One. 2009;4(4):e5390.
Dupuis L, et al. Dyslipidemia is a protective factor in amyotrophic lateral sclerosis. Neurology.
Dupuis L, et al., Energy metabolism in amyotrophic lateral sclerosis. Lancet Neurol. 2011

youmatterpdhc.org What is a miscarriage? A miscarriage, also called a spontaneous abortion, is the spontaneous ending of a pregnancy About one-third to one-half of all pregnancies end in miscarriage before a woman misses a menstrual period or even knows she is pregnant. About 10-20% of women who know they are pregnant will miscarry. A miscarriage is most likely to occur within the first thre