Answer to Question:
a. Merck has a patent for Zetia. This is an example of a government-created barrier to entry, which
b. Chiquita controls most banana plantations. Control over a scarce resource gives Chiquita market c. The Walt Disney Company has the copyright over animations featuring Mickey Mouse. This Is another example of a government-created barrier to entry that gives the Walt Disney Company market power. Question: Skyscraper City has a subway system, for which a one-way fare is $1.50. There is
pressure on the mayor to reduce the fee by one-third, to $1.00. The mayor is dismayed, thinking that
this will mean Skyscraper City is losing one-third of its revenue from sales of subway tickets. The
mayor’s economic adviser reminds her that she is focusing only on the price effect and ignoring the
quantity effect. Explain why the mayor’s estimate of a one-third loss of revenue is likely to be an
overestimate. Illustrate with a diagram.

Answer to Question:
A reduction in fares from $1.50 to $1.00 will reduce the revenue on each ticket that is currently sold by
one-third; this Is the price effect. But a reduction in price will lead to more tickets being sold at the lower
price of $1.00, which creates additional revenue; this is the quantity effect. The price effect is the loss
of revenue on all the currently sold tickets. The quantity effect is the increase in revenue from increased
sales as a result of the lower price.
Question: Consider an industry with the demand curve (D) and marginal cost curve (MC) shown in
the accompanying diagram. There is no fixed cost. If the industry is a single-price monopoly, the
monopolist’s marginal revenue curve would be MR. Answer the following questions by naming the
appropriate points or areas. 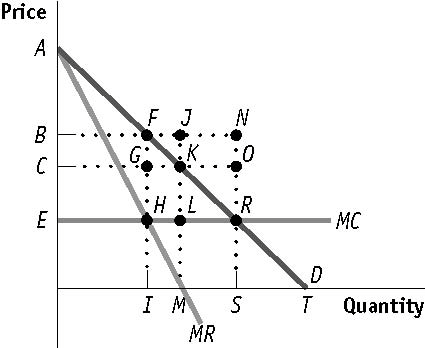 Answer to Question:
a. In a perfectly competitive industry, each firm maximizes profit by producing the quantity at which
price equals marginal cost. That is, all firms together produce a quantity S, corresponding to point R,
where the marginal cost curve crosses the demand curve. Price will be equal to marginal cost, E.
b. Consumer surplus is the area under the demand curve and above price. In part a, we saw that the
perfectly competitive price is E. Consumer surplus in perfect competition is therefore the triangle ARE.
c. A single-price monopolist produces the quantity at which marginal cost equals marginal revenue, that
is, quantity I. Accordingly, the monopolist charges price B, the highest price it can charge if it wants to
sell quantity I.
d. The single-price monopolist’s profit per unit is the difference between price and the average total
cost. Since there is no fixed cost and the marginal cost is constant (each unit costs the same to
produce), the marginal cost is the same as the average total cost. That is, profit per unit is the distance
BE. Since the monopolist sells I units, its profit is BE times I, or the rectangle BEHF.
e. Consumer surplus is the area under the demand curve and above the price. In part c, we saw that the
monopoly price is B. Consumer surplus in monopoly is therefore the triangle AFB.
f. Deadweight loss is the surplus that would have been available (either to consumers or producers)
under perfect competition but that is lost when there is a single-price monopolist. It is the triangle FRH.
g. If a monopolist can price-discriminate perfectly, it will sell the first unit at price A, the second unit at a
slightly lower price, and so forth. That is, it will extract from each consumer just that consumer’s
willingness to pay, as indicated by the demand curve. It will sell S units, because for the last unit, it can
just make a consumer pay a price of E (equal to its marginal cost), and that just covers its marginal cost
of producing that last unit. For any further units, it could not make any consumer pay more than its
marginal cost, and it therefore stops selling units at quantity S.
Practice Questions and Answers from Lesson III-3: Monopoly Question: Bob, Bill, Ben, and Brad Baxter have just made a documentary movie about their
basketball team. They are thinking about making the movie available for download on the Internet, and
they can act as a single-price monopolist if they choose to. Each time the movie is downloaded, their
Internet service provider charges them a fee of $4. The Baxter brothers are arguing about which price to
charge customers per download. The accompanying table shows the demand schedule for their film.
Price of download
Quantity of downloads demanded
a. Calculate the total revenue and the marginal revenue per download.
b. Bob is proud of the film and wants as many people as possible to download it. Which price would he
choose? How many downloads would be sold?
c. Bill wants as much total revenue as possible. Which price would he choose? How many downloads
would be sold?
d. Ben wants to maximize profit. Which price would he choose? How many downloads would be sold?
e. Brad wants to charge the efficient price. Which price would he choose? How many downloads would
be sold? 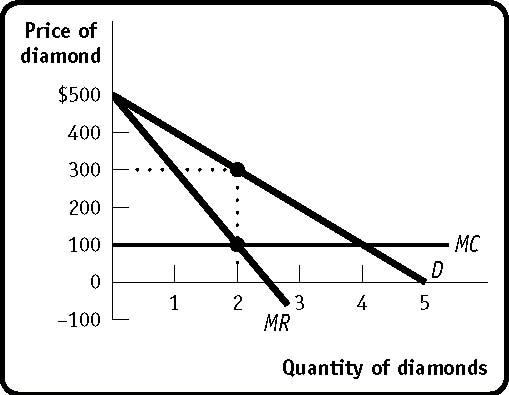 Practice Questions and Answers from Lesson III-3: Monopoly Question: Suppose that De Beers is a single-price monopolist in the market for diamonds. De Beers
has five potential customers: Raquel, Jackie, Joan, Mia, and Sophia. Each of these customers will buy
at most one diamond—and only if the price is just equal to, or lower than, her willingness to pay.
Raquel’s willingness to pay is $400; Jackie’s, $300; Joan’s, $200; Mia’s, $100; and Sophia’s, $0. De
Beers’s marginal cost per diamond is $100. This leads to the demand schedule for diamonds shown in
the accompanying table.

a. Calculate De Beers’s total revenue and its marginal revenue. From your calculation, draw the
demand curve and the marginal revenue curve.
b. Explain why De Beers faces a downward-sloping demand curve.
c. Explain why the marginal revenue from an additional diamond sale is less than the price of the
diamond.
d. Suppose De Beers currently charges $200 for its diamonds. If it lowers the price to $100, how large
is the price effect? How large is the quantity effect?
e. Add the marginal cost curve to your diagram from part a and determine which quantity maximizes De
Beers’s profit and which price De Beers will charge.
Answer to Question:
a. Total revenue (TR) and marginal revenue (MR) are given in the accompanying
table.
The accompanying diagram illustrates De Beers’s demand curve and marginal revenue (MR) curve. b. De Beers is the only producer of diamonds, so its demand curve is the market demand curve. And
the market demand curve slopes downward: the lower the price, the more customers will buy
diamonds.
c. If De Beers lowers the price sufficiently to sell one more diamond, it earns extra revenue equal to the
Practice Questions and Answers from Lesson III-3: Monopoly price of that one extra diamond. This is the quantity effect of lowering the price. But there is also a price
effect: lowering the price means that De Beers also has to lower the price on all other diamonds, and
that lowers its revenue. So the marginal revenue of selling an additional diamond is less than the price
at which the additional diamond can be sold.
d. If the price is $200, then De Beers sells to Raquel, Jackie, and Joan. If it lowers the price to $100, it
will also sell a diamond to Mia. The price effect is that De Beers loses $100 (the amount by which it
lowered the price) each from selling to Raquel, Jackie, and Joan. So the price effect lowers De Beers’s
revenue by 3 × $100 = $300. The quantity effect is that De Beers sells one more diamond (to Mia), at
$100. So the quantity effect is to raise De Beers’s revenue by $100.
e. The marginal cost (MC) curve is constant at $100, as shown in the diagram. Marginal revenue equals
marginal cost at a quantity of 2 diamonds. So De Beers will sell 2 diamonds at a price of $300 each.
Question: Use the demand schedule for diamonds given in the previous question. The marginal
cost of producing diamonds is constant at $100. There is no fixed cost.
a. If De Beers charges the monopoly price, how large is the individual consumer surplus that each
buyer experiences? Calculate total consumer surplus by summing the individual consumer surpluses.
How large is producer surplus?
Suppose that upstart Russian and Asian producers enter the market and the market becomes
perfectly competitive.
b. What is the perfectly competitive price? What quantity will be sold in this perfectly competitive
market?
c. At the competitive price and quantity, how large is the consumer surplus that each buyer
experiences? How large is total consumer surplus? How large is producer surplus?
d. Compare your answer to part c to your answer to part a. How large is the deadweight loss associated
with monopoly in this case?
Answer to Question:
a. The monopoly price is $300. At that price Raquel and Jackie buy diamonds. Raquel’s consumer
surplus is $400 − $300 = $100; Jackie’s is $300 − $300 = $0. So total consumer surplus is $100 + $0 =
$100. Producer surplus is $300 − $100 = $200 for each diamond sold; 2 × $200 = $400.
b. In a perfectly competitive market, P = MC. That is, the perfectly competitive price is $100, and at that
price 4 diamonds will be sold—to Raquel, Jackie, Joan, and Mia.
c. At the competitive price, Raquel’s consumer surplus is $400 − $100 = $300; Jackie’s, $300 − $100 =
$200; Joan’s, $200 − $100 = $100; and Mia’s, $100 − $100 = $0. So total consumer surplus is $300 +
$200 + $100 + $0 = $600. Since the price is equal to marginal cost, there is no producer surplus.
d. Under perfect competition, the sum of consumer and producer surplus is $600 + $0 = $600. Under
monopoly, the sum of consumer and producer surplus is $100 + $400 = $500. So the loss of surplus to
society from monopoly—the deadweight loss—is $600 − $500 = $100.
Question: Use the demand schedule for diamonds given in the previous questions. De Beers is a
monopolist, but it can now price-discriminate perfectly among all five of its potential customers. De
Beers’s marginal cost is constant at $100. There is no fixed cost.
a. If De Beers can price-discriminate perfectly, to which customers will it sell diamonds and at what
prices?
b. How large is each individual consumer surplus? How large is total consumer surplus? Calculate
producer surplus by summing the producer surplus generated by each sale.
Practice Questions and Answers from Lesson III-3: Monopoly Answer to Question:
a. If De Beers can price-discriminate perfectly, it will charge each customer that customer’s willingness
to pay. That is, it will charge Raquel $400, Jackie $300, Joan $200, and Mia $100. De Beers does not
want to sell to Sophia since she will only buy at a price of $0, and that would be below De Beers’s
marginal cost.
b. Since each consumer is charged exactly her willingness to pay, there is no consumer surplus. De
Beers’s producer surplus is $400 − $100 = $300 from selling to Raquel; $300 − $100 = $200 from
selling to Jackie; $200 − $100 = $100 from sel ing to Joan; $100 − $100 = $0 from selling to Mia. So
producer surplus is $300 + $200 + $100 + $0 = $600.

Question: Download Records decides to release an album by the group Mary and the Little Lamb. It
produces the album with no fixed cost, but the total cost of downloading an album to a CD and paying
Mary her royalty is $6 per album. Download Records can act as a single-price monopolist. Its marketing
division finds that the demand schedule for the album is as shown in the accompanying table.
Price of album
Quantity of albums demanded

Medical costs still burden many despite insurance - the boston globe