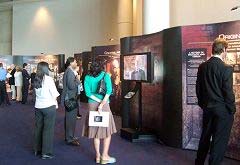 VOLUME 1 ISSUE 33 OCTOBER 5, 2006
Introduction to Falun Dafa
International Human Rights Exhibition
Exposes Psychiatric Abuse in China
Falun Dafa, also known as Falun Gong, is a practice for benefiting (Clearwisdom.net) The Citizens' Commission on Human Rights (CCHR) held
an international human rights exhibition at the Darling Harbor Conference and Exhibition Center in Sydney, Australia for the first time. Photos exposing the Chinese Communist Party’s (CCP) persecution of Falun Gong practitioners through the abuse of psychiatry were shown under the title, "China’s Gulags." the part of practitioners to follow the universal principles of Photos exposing the
CCP’s persecution of
Falun Gong
practitioners through
the abuse of the
psychiatric profession
in China’s Gulags
and walks of life. In the face of the most brutal and vicious This exhibition exposed the fact that the psychiatric and psychology professions in China are used to persecute specific ethnic groups and dissidents. The CCHR selected two photos showing Falun Gong practitioners who had been tortured to extreme weakness and emaciation with psychiatric drugs. The photo captions stated that the former USSR was not the only country using gulags to detain political prisoners, and that China also imprisons and persecutes various groups in a system of gulags. Chinese psychiatrists have tortured hundreds of thousands of Falun Gong practitioners with electric shocks, imprisonment and drugs. They inject harmful drugs, resulting in swollen and extended tongues. They use high-voltage electric needles to shock the practitioners’ acupuncture points on the bottoms of their feet, leading to extreme pain. They apply large doses of psychiatric drugs to force the practitioners to give up their beliefs. An investigation by the World Organization to Investigate the Persecution of Falun Gong (WOIPFG) has shown that since July 1999, at least one thousand healthy Falun Gong practitioners were sent to mental hospitals to receive forced injections or take drugs. More than 110 mental hospitals in China are involved in the persecution of Falun Gong. The World Psychiatric Association planned to investigate the allegation that China abuses mental hospitals, but canceled at About Clearwisdom
the last moment because of lack of cooperation from the CCP. The following is an example of the CCP abusing the mental health system by imprisoning a Falun Gong practitioner and torturing her with psychiatric drugs. Ms. Huang Xin is a retired military examiner. She is the mother of Zeng Xiaonan, a resident of Toronto, Canada. On 2003 she was sentenced to eight years of imprisonment in Liaoning Province Women’s Prison for refusing to give up her belief in Falun Gong. At the beginning of 2004, Ms. Huang was sent to the Liaoning Province Women’s Prison Hospital. There, she was injected with nerve-damaging drugs against her will, and lost most of her memory. She now displays slowed reactions to her surroundings. She was forced to take two daily doses of Chlorpromazine hydrochloride (trade name: Thorazine). Because of the side effects of the high drug doses, her mind has become blurry. Sometimes she cannot speak and she has difficulty moving her lower limbs. 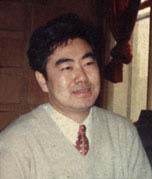 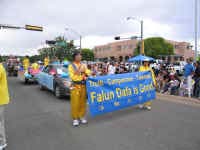 CLEARWISDOM REVIEW- UPDATE ON FALUN DAFA WORLDWIDE VOLUME 1 ISSUE 33 : PAGE 2
Mr. Yin Anbang, 38, Persecuted to Death
nders of Falun Dafa
at Tailai Prison
(Clearwisdom.net) I am self-employed. My eyes
(Clearwisdom.net) Mr. Yin Anbang, a Falun Gong
became blurred because of working too hard. My practitioner from Harbin City, Heilongjiang Province, was eyeballs were protruding and my neck felt tight. I felt persecuted cruelly and repeatedly. On the afternoon of suffocated and weak all the time. I wasn’t yet forty August 15, 2006, he died as a result of persecution, at the years old, but I had wrinkles all over my face. I’m 5 ft. age of 38, at Tailai Prison in Qiqihar City. 4 in. tall, but I weighed less than 110 pounds. The doctor told me that I had severe hyperthyroidism, and Mr. Yin was born in 1968. He was a former teacher at the recommended that I be hospitalized and have Heilongjiang Provincial Party School. In February 2001, when he was at work, he was arrested and taken to a drug rehabilitation center and required to attend the so-called I was shocked and devastated by this news. I was “Provincial Subsidiary Mandatory Transformation Class." He told my neck would be cut open during the surgery. It was subjected to brainwashing and cruelly persecuted there. Later, Mr. Yin was illegally sentenced to Changlinzi Forced I told my husband about this. It seemed to him that Labor Camp. In April 2001, he was violently beaten. the sky had collapsed: the business would be held up. The surgery fee, expenses for medicines and hospital expenses were very high. The dreadful surgery was even more terrifying. So we decided to wait. But the physical and mental pressure was One day, a client introduced me to Falun Gong, and gave me the book, Zhuan Falun. At that time, I couldn’t see anything clearly and my eyes couldn’t focus. So I covered one eye using my hand and used the other eye to read the book. Although I read it very slowly, I kept on reading. home by the State Security Division of the Daoli District in Harbin City on the evening of November 12, 2005. Mr. Yin Several days later, when I was half asleep, I felt a big was detained at the Detention Center of the Daoli Police hand pull something out of my neck. I immediately Substation. He firmly maintained his innocence and went on woke up. I was able to breathe freely right away and a hunger strike for twenty days to protest the persecution. no longer felt that I was suffocating. All of my The officials in the Procuratorate sent fabricated records to the court to prosecute him. On February 5, 2006, the Chinese Communist Party (CCP) court in the Daoli District I was fully recovered. I was full of energy and became happy again. My weight increased to over illegally and secretly tried Mr. Yin. He was sentenced to four years of imprisonment in Hulan Prison. In late April 2006, Mr. 140 pounds. The business owners who know me Yin was transferred from Hulan Prison to Tailai Prison in were all surprised by the dramatic change in me. This experience made me believe from the bottom of my Qiqihar City, where he was persecuted further. He held a hunger strike at Tailai Prison for a long time to protest the heart that Falun Dafa is good, and I told many persecution. By August 15, 2006, Yin Anbang had been people about the miracle that happened to me. New Mexico, USA: Practitioners Join the Annual Santa Fe Fiesta Parade
(Clearwisdom.net) On September 10, 2006, practitioners from
Colorado and Kansas joined practitioners in New Mexico for the
"Historical/Hysterical" parade in Santa Fe, New Mexico. The parade
is a major event in the annual Santa Fe Fiesta, the oldest continuous
community celebration in the United States. Since 1712, the people
of Santa Fe have taken pride in both the historical and religious
significance of the Santa Fe Fiesta. The atmosphere of the parade
was joyful, and the Falun Gong practitioners were warmly received
by the parade spectators. Practitioners distributed nearly 2,000 flyers
to introduce Falun Gong to the people of Santa Fe.
For more current information of Falun Dafa worldwide, please visit www.clearwisdom.net
To learn more about Falun Dafa as a practice, please visit www.falundafa.org

Wicklow Way Record Run (Saturday 13th September, 2008) Sunday evening and I’m looking at the long term weather forecast after the nine O’clock news. Rain rain rain rain, but on Saturday it looks like there’ll be a gap, and judging by the pressure patterns there won’t be much wind either. Five days is an eternity in long term weather prediction, particularly in such a fluid chan