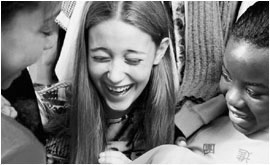 For many gardeners a slight air of mystery can surround the use ofgrasses in gardens, but in fact they are deceptively easy to use and arereally no different from most perennial plants. Certainly there aregrasses which are ‘spreaders’, but those mostly offered by specialist nurseriesand good garden centres are clump forming plants that have excellent gardenmanners. Strongly architectura