Przybyslawski et al. • ␤ Noradrenergic Blockade Attenuates Reactivated Memory J. Neurosci., August 1, 1999, 19(15):6623–6628 6625
vation in the passive avoidance task caused a marked perfor- mance decrement when the animals were retested, as shown in Figure 5. There was a decrease in the latency to place two paws (t(19) ϭ 2.68; p Ͻ 0.05) and in the frequency distribution of number of rats to enter the dark box with all four paws (␹2 ϭ 3.231; 0.01 Ͻ p Ͻ 0.05). Note that the mean performance of the saline control group in this phase of the experiment was better than at the test (reactivation) trial (Fig. 4) because only those animals treated with saline and having an optimal avoidance performance at reactivation were used for the postreactivation study, half being treated again with saline and half being treated with propranolol after reactivation.
DISCUSSION
These experiments provide clear evidence that pharmacological
blockade of ␤ receptors by systemic injections of propranolol up Figure 1. Effect of propranolol at different time intervals after a reacti- to 2 hr after reactivation of a memory trace induces amnesia vation trial in the radial maze task. Twenty-four hours after the reacti- when rats are tested 1 or 2 d later. The amnesia is transient or vation session, control rats had good retention performance, whereas propranolol-injected rats (10 mg/kg, i.p.) showed amnesia when the partial in that the rats are capable of relearning the task with injections were made up to 2 hr after the reactivation trial. **p Ͻ 0.01, considerable savings. Thus far, studies of the role of ␤ noradren- significantly greater than saline group; ‡p Ͻ 0.05, significantly less than 5 ergic receptors in rats have suggested that these receptors play a role in memory consolidation mainly by interaction with other neurotransmitter systems, particularly GABAergic (Introini- Effect of propranolol with or without reactivation
Collison et al., 1994), cholinergic (Introini-Collison et al., 1996), Injection 5 min after a reactivation trial produced a significant and opioid (Introini-Collison et al., 1989), the site of action being performance decrement 24 hr later compared with the rats re- the amygdala (for review, see McGaugh and Cahill, 1997). An ceiving a propranolol injection in the animal vivarium, as shown early study in adult rats did, however, show an amnesic effect of propranolol alone when injected 5 min after passive avoidance (14) ϭ 4.015; p ϭ 0.001). Propranolol injections 2 hr after reactivation also induced some amnesia, because these an- training. Interestingly, the animals were able to express memory imals made more errors at the retention test than the control for up to 6 hr after treatment, the amnesia appearing only in those group injected without a reactivation trial. A t test revealed a tested 1 d after training (Cohen and Hamburg, 1975), corrobo- significant effect of treatment on the difference between number rating later views that ␤ receptors govern the adenylcyclase- of errors on the last training trial and the mean of three test trials linked cAMP cascade leading to protein synthesis-dependent (26) ϭ 2.30; p Ͻ 0.05). Note that the last training trial was used as a baseline performance in these experiments, because one A recent study in humans suggests that propranolol selectively group did not receive a reactivation trial.
attenuates memories for emotionally charged events (Cahill et al., In these two experiments, only rats that had the behavioral trial 1994). Another study in elderly humans reports that ␤ blockers, at before the propranolol treatment showed amnesia, although they clinically antihypertensive doses, can block the beneficial effects had been subjected to one more trial than the nonreactivated rats.
of arousal on memory performance (Nielsen and Jensen, 1994). It Thus, the effect of a propranolol injection was limited to a period should be noted that, aside from these two studies, there are few of up to 2 hr after memory comes to an active state.
reports of memory impairment associated with clinical doses of ␤ blockers, despite their widespread use as antihypertensives. This Effect of propranolol on reward incentive
is probably because of the use of hydrophilic forms, which do not There were no differences in the latencies or total time to con- readily cross the blood–brain barrier.
sume the Chocopops before or after propranolol treatment, as Systemic injections, such as those used in the present experi- indicated in Figure 3. (paired t tests; latency, t(7) ϭ 1.3; total time, ments, are useful if the drug treatment might have a clinical t(7) ϭ 1.36; p Ͼ 0.05).
application, as discussed below. However, this leaves open the Propranolol injection after inhibitory avoidance training
question of site of drug action. There are compelling arguments Propranolol-treated rats had a shorter latency to place two paws for the effect being mediated by blockade of ␤ receptors in the CNS. Systemically administered propranolol has little or no effect (56) ϭ 2.19; p Ͻ 0.05), as shown in Figure 4.
There was no effect of treatment on percentage of rats completely on cerebral blood flow to account for its memory impairing effects entering the dark box (␹2 ϭ 0.82, NS), as illustrated in Figure 4.
(Olesen, 1986). Peripherally administered propranolol, a li- Thus, propranolol has only a small effect on memory, as measured pophilic molecule, readily crosses the blood–brain barrier; after by the immediate step into response. The two other behavioral chronic treatment in humans, the ratio of brain/plasma concen- measures most often used to evaluate memory in the passive trations of the drug is ϳ20:1 (Cruickshank et al., 1980; Neil- avoidance task, step-through latency and total time spent in the Dwyer et al., 1981). An important recent study has provided shock compartment, were not modified by post-training propran- strong evidence that the central effects of propranolol are respon- sible for the amnesia for emotional events in man by comparing the effects of propranolol with a hydrophilic ␤ antagonist, which Propranolol after reactivation of avoidance training
does not cross the blood–brain barrier. The latter had no Saline-treated animals continued to show good avoidance behav- memory-impairing effects. Finally, in a recent study from our ior at the second test. Propranolol injected 5 min after a reacti- laboratory, intracerebroventricular injection of the ␤ antagonist 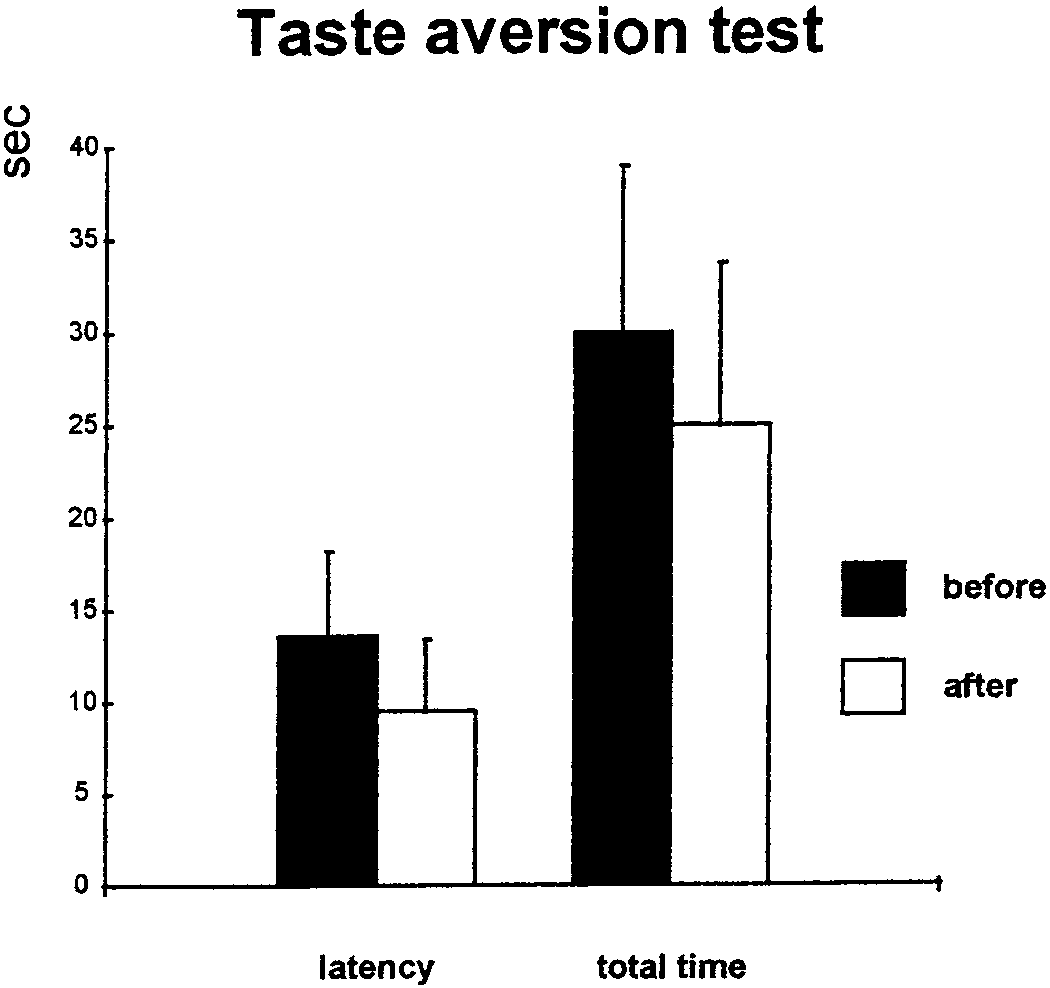 6626 J. Neurosci., August 1, 1999, 19(15):6623–6628
Przybyslawski et al. • ␤ Noradrenergic Blockade Attenuates Reactivated Memory Figure 2. Effect of propranolol on memory with or without reactivation trial. A, Rats received a propranolol injection (10 mg/kg, i.p.) in the animal vivarium 2 hr after a reactivation trial or after no reactivation trial (n ϭ 14 in each group). There was a significant performance deficit in the group that had the reactivation trial before the drug treatment compared with the group that received drug alone. *p Ͻ 0.05. B, Procedure the same as in A, except that injections were made 5 min after a reactivation trial or in the vivarium (n ϭ 8 in each group). There was a significant performance deficit in rats receiving the injection after a reactivation trial compared with those rats receiving drug treatment without reactivation. Note the nearly errorless performance of this group on the test trial. **p Ͻ 0.001.
of amnesic agents (Misanin et al., 1968; Schneider and Sherman,1968; Riccio and Stikes, 1969; Lewis et al., 1972; Lewis andBregman, 1973). The results of those early experiments, althoughthey did not extend our knowledge of the neurobiological pro-cesses underlying these reconsolidation processes, did reinforcethe notion that memory is dynamic and that new memories areformed on the foundation of reactivated old memories. Thatpostreactivation amnesia can be induced by both NMDA recep-tor (Przybyslawski and Sara, 1997) and ␤ receptor blockade (Roullet and Sara, 1998) suggests intracellular mechanisms in-volving the same second messenger pathways as involved in syn-aptic plasticity and initial memory formation.
In the present series of experiments, the effect of propranolol is not limited to conditioned emotional responses but can be ob-tained in appetitive situations in which the animals are only mildlyfood-deprived and are well trained in the task. Two controlprocedures ensured that the behavioral deficit was not caused bya proactive effect of propranolol on performance at the time oftest. Those animals injected 5 hr after reactivation and tested 24hr later showed no such performance decrement nor did thosethat were not subjected to a reactivation trial before drug treat-ment. Memory must be in an active state for propranolol to beeffective, and the temporal limit for treatment efficacy under Figure 3. Effect of propranolol on reward incentive. Latency (left) and total time (right) to consume five Chocopops before (white bars) and 24 hr these experimental conditions is between 2 and 5 hr.
after (black bars) injection of propranolol. There is no significant change It is surprising that the effect of propranolol appeared to be in either measure (paired t test), indicating that the drug did not induce more robust after reactivation of inhibitory avoidance training than after the original learning. Such increased vulnerability toamnesic agents after reactivation is not, however, unprecedented.
timolol impaired a reactivated memory in a paradigm similar to Mactutus et al. (1979) reported that memory reactivated by ex- the one used in the present experiments. Intracerebroventricular posure to the place where a footshock had been administered was injections allowed a temporal resolution of drug action and a more susceptible to hypothermia-induced amnesia than immedi- window of efficacy was found at 1 hr after the reactivation trial; ately after the initial acquisition. Further investigation is required intracerebroventricular injections earlier or later did not impair to determine whether reactivated memories, in general, are more labile and vulnerable to amnesic agents or whether it is particular The present results reinforce previous studies showing that to the conditioned emotional response elicited by the passive reactivated memories are susceptible to interference by a variety avoidance test. It is possible that the increased vulnerability to the