Exp Clin Endocrinol Diabetes 109 (2001) 120 ± 123 Fatigue and hyponatremia in a 75-year-old woman: unusual presentation of hypophysitisJ. Klein, W. Kern, H. L. FehmDepartment of Internal Medicine I, Medical University of Lübeck, Germany Key words: Hypophysitis, hyponatremia, hypopituitarism secondary hypothyroidism. Hormonal substitution with hydro- Summary: A 75-year-old woman presented with general fatigue cortisone and levothyroxine resulted in rapid improvement of all progressing to somnolence. Laboratory tests showed marked symptoms and signs. Without additional treatment shrinkage of the hyponatremia, TSH in the normal range, but low levels of free T3 pituitary gland could be documented. Our report extends the and free T4. Evaluation of pituitary hormones and magnetic known clinical and pathological spectrum of hypophysitis and resonance imaging of the pituitary unmasked findings character- illustrates the need to include this uncommon entity in the istic for hypophysitis with secondary adrenal insufficiency and differential diagnosis of hyponatremia even in elderly patients.
regular medication. Except for the treatment of Hypophysitis is a rare inflammatory disorder, first tuberculosis forty years ago, the past history was described by Goudie in 1962, which may lead to destruction of the anterior pituitary and usually On examination, the patient appeared somnolent, affects young women in late pregnancy or postpartum but fully oriented. She was 1.63 m tall and weighed (Beressi et al., 1999; Goudie and Pinkerton, 1962).
56 kg. She was afebrile, her blood pressure was 180/ Histological examination classically reveals infiltra- 90 mmHg, the heart rate was 80 beats/min and tion of the pituitary tissue by lymphocytes and regular. Her face was pale and appeared slightly macrophages (Beressi et al., 1999), a finding that has puffy, skin turgor was normal, there were no signs of led to the coining of the term lymphocytic hypo- oedema and no pathological findings on examination physitis. Typical features of the clinical presentation of the lungs, heart and abdomen. All peripheral include headaches, hypopituitarism with predomi- pulses were palpable. Neurological examination nant symptoms and signs of adrenal insufficiency, and revealed no abnormality of the cranial nerves, visual field loss (Beressi et al., 1999; Cosman et al., particularly no visual field deficits. Apart from 1989; Jenkins et al., 1995; Powrie et al., 1995). Here, symmetrical distal hypaesthesia in both feet and we describe the unusual case of a 75-year-old woman diminished ankle reflexes, there were no signs of with general fatigue and hyponatremia as only prominent features that turned out to be caused by The results of routine hematological, blood chem- secondary adrenal insufficiency and hypothyroidism ical and enzyme tests were normal with the exception of a marked hyponatremia and elevated values for C- reactive protein, fibrinogen and CK (Table 1). TSH was in the normal range, but free T3 and T4 were decreased. Furthermore, anti-TPO antibody levels The electrocardiogram, a chest radiograph and an A 75-year-old woman presented with complaints of abdominal ultrasound showed no significant abnor- increasing fatigue and general loss of energy that had malities. Magnetic resonance imaging of the brain progressively been developing over the last five days.
revealed a slightly enlarged pituitary that partially Furthermore, she had noticed a puffy face and felt extended above the sella. Gadolinium enhancement nauseous. She did not report weight loss, night sweats, showed homogeneous uptake in the entire pituitary or fevers, and the remaining functional enquiry was with a prominent rim along the sellar diaphragm unremarkable. She did not smoke and was on no 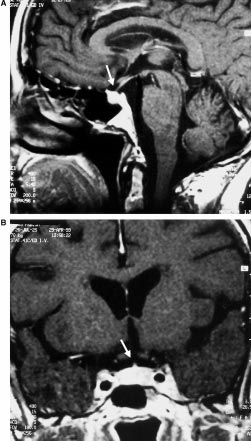 J. Klein et al., Hypophysitis in a 75-year-old woman Table 1 Pathological blood chemical values at presentation Corticotropin-Releasing Hormone stimulation. Sim- ilarly, Thyrotropin-Releasing Hormone stimulation did not elicit an adequate response of TSH. Finally, secondary hypogonadism was detected as evidenced by low FSH and LH baseline levels and the absence of a significant rise of these hormones after Gona- dotropin-Releasing Hormone stimulation.
Treatment with 200 mg hydrocortisone per day and subsequently 50 mg levothyroxine resulted in rapid improvement of all symptoms. Sodium values re- turned to normal within the following four days with free water restriction only. Furthermore, the levels of plasma free T3 and T4 as well as basal cortisol also normalized. Magnetic resonance imaging of the pituitary three months later showed a rather small but otherwise normal appearing pituitary with only minimal enhancement of the sellar diaphragm (see Fig. 2). Seventeen months after the initial presenta- tion the patient is well. She is currently taking 100 mg levothyroxine and 30 mg hydrocortisone per day.
DiscussionIn this report, we describe a 75-year-old woman in whom fatigue and hyponatremia were the leading clinical and laboratory features at the first presenta- tion. The clinical course, evaluation of pituitary hormones, and imaging studies led to the diagnosis of hypophysitis causing secondary hypothyroidism and adrenal insufficiency. Not only the initial imaging characteristics ± demonstrating suprasellar extension of the pituitary and dural contrast enhancement described as pathognomonic ªdural tailº (Ahmadi et al., 1995; Honegger et al., 1997) ± but also the radiographic changes three months later ± charac- terized by an almost complete restitutio ad integrum ± corroborated the diagnosis. Furthermore, for hypo- Fig. 1 Contrast-enhanced computed tomography of the pituitary physitis, a preference for destruction of ACTH and gland in sagittal (A) and coronal (B) planes at first presentation. In TSH secreting cells has been reported (Beressi et al., both views there is enlargement of the pituitary gland which extends beyond the sellar diaphragm (arrow in A). The entire 1999; Jensen et al., 1986; Mayfield et al., 1980; pituitary takes up the contrast medium with accentuation of a small McDermott et al., 1988; Richtsmeier et al., 1980), a rim along the diaphragm (ªdural tailº, arrow in B) finding that is in exact concordance with our case.
Yet, a number of features of the case presented here Pituitary hormone tests and clinical course First, the age of onset of hypophysitis is very Results of pituitary stimulation tests are shown in unusual. Normally, the onset of this rare entity is seen Table 2. They revealed an inadequate response of most commonly in young women in late pregnancy ACTH and cortisol (from very low baseline levels) to or in the postpartum period with a mean age at 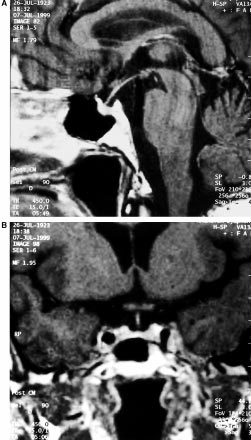 FACT SHEET PROCTER & GAMBLE USES SAFE DIGITAL SIGNATURE STANDARD FOR ELECTRONIC LABORATORY NOTEBOOK PROJECT To be deployed to up to 4500 P&G scientists and technicians WHAT : Procter & Gamble (P&G) is using the SAFE digital signature standard in its Electronic Laboratory Notebook (ELN) project, reaching potentially 4500 people inside the company. This project is

Bio-Beads SM adsorbents are neutral, macroporous polymericBio-Beads SM-2 nonpolar polystyrene adsorbents are particu-beads of high surface area for adsorbing organics from aqueouslarly useful for the adsorption of nonpolar substances or sur-solutions. Each bead is composed of a large number of highlyface active agents from aqueous solutions. crosslinked microspheres, giving it high surface a