Microsoft word - the impact of psychiatric disorder on the environment.doc

DRAFT of chapter for The Impact of the Environment on Psychiatric Disorder (Hugh
Freeman and Stephen Stansfield eds), by John Adams, 8 August 2002
[This essay has not been published. It was rejected by the commissioning editors as
“not what they had in mind”. The much-delayed book was published in September
2006.
In research for the essay I discovered the heated debate about what to do with DSPDs –
people with Dangerous and Severe Personality Disorders. I have decided to post it on
my website in October 2006 in the hope that it might contribute to a debate that has
made little progress since it was written.]
Risk and the impact of psychiatric disorder on the environment 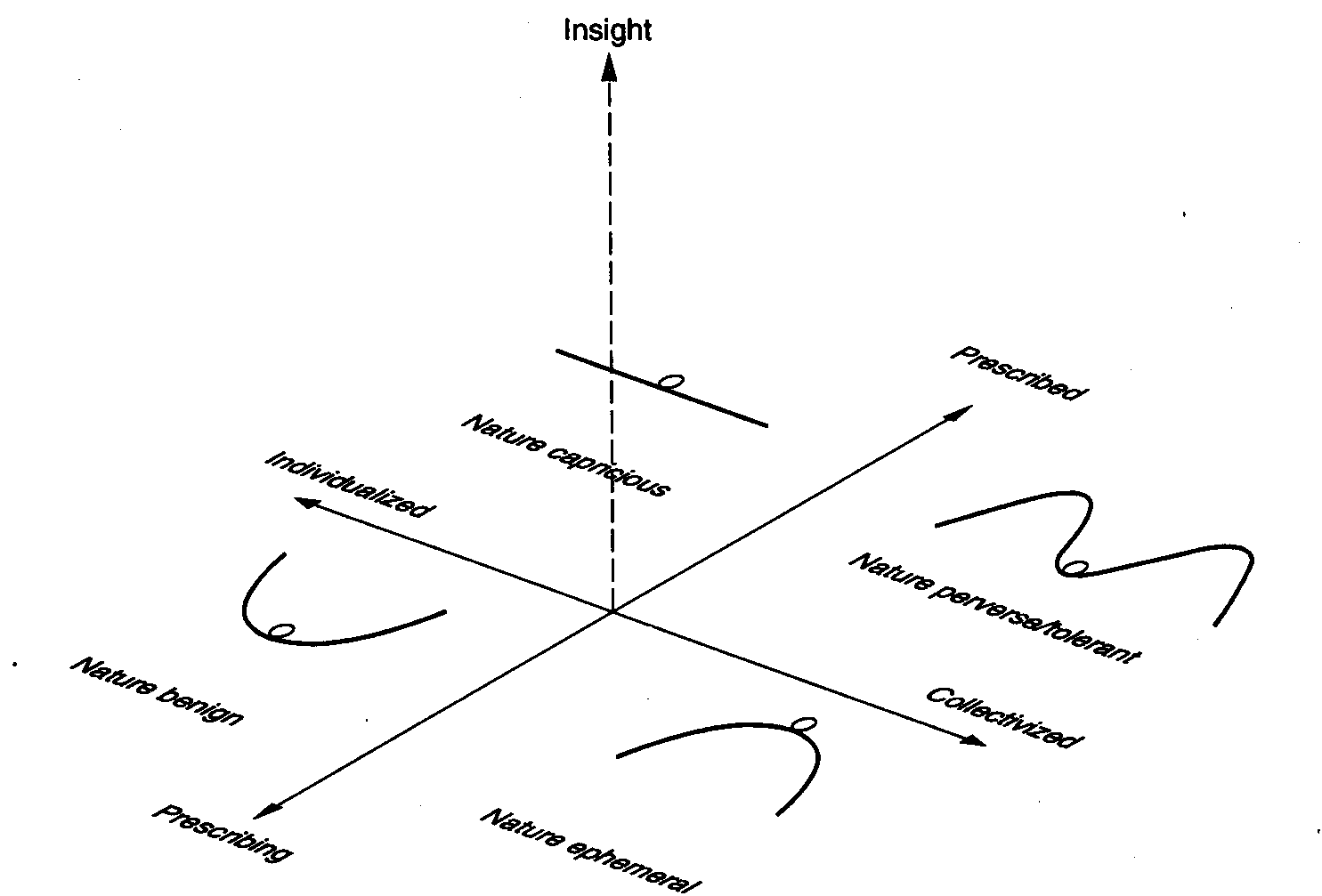 Psychiatrists deal routinely with people who construe reality idiosyncratically, people who perceive threats that “normal” people cannot see. But the concept of normality can embrace a range of perceptual filters. Even where risks are clearly perceptible, either directly or with the help of science, it can be difficult for “normal” people to reach a consensus about what is normal and what is not. Agreement about virtual risks is much more elusive. Participants in debates about such risks frequently question their opponents’ grip on reality and denounce those who disagree with them as “mad”. With such risks filters are all; the perception of virtual risk comes uncomfortably close to hallucination - defined as “perception in the absence of external stimuli”. The purpose of the drugs prescribed for people with personality disorders is to help them see the world as other, “normal”, people see it – to give them more insight. What is urgently needed for all participants in debates about risk is the intellectual equivalent of drugs and cognitive therapy that heighten insight. The Hierarchist would appear to be in need of treatment combining the lot. As governor of Bedlam his first priority is to keep order – a job best done empathetically. Risk is always with us and we will never reach complete agreement about how to manage it. There is no single, optimal, right way to do it - although there are ways that are clearly unsuccessful from all perspectives. The Government’s handling of BSE and its proposed reforms to the Mental Health Act are two prominent examples. At the root of such failures lie mistrust and paranoia, and the inability to agree about which phenomenon one is dealing with is part of the problem. The concealment of information at a crucial stage in the development of the BSE crisis was justified by a mistrustful (paranoid?) government that feared that the wider public could not be relied upon to react to the information responsibly. The wider public reciprocated this mistrust and the Government became incapable of reassuring it about anything. Whenever it insisted something was safe fatalists and egalitarians assumed that it must be covering up something dreadful. 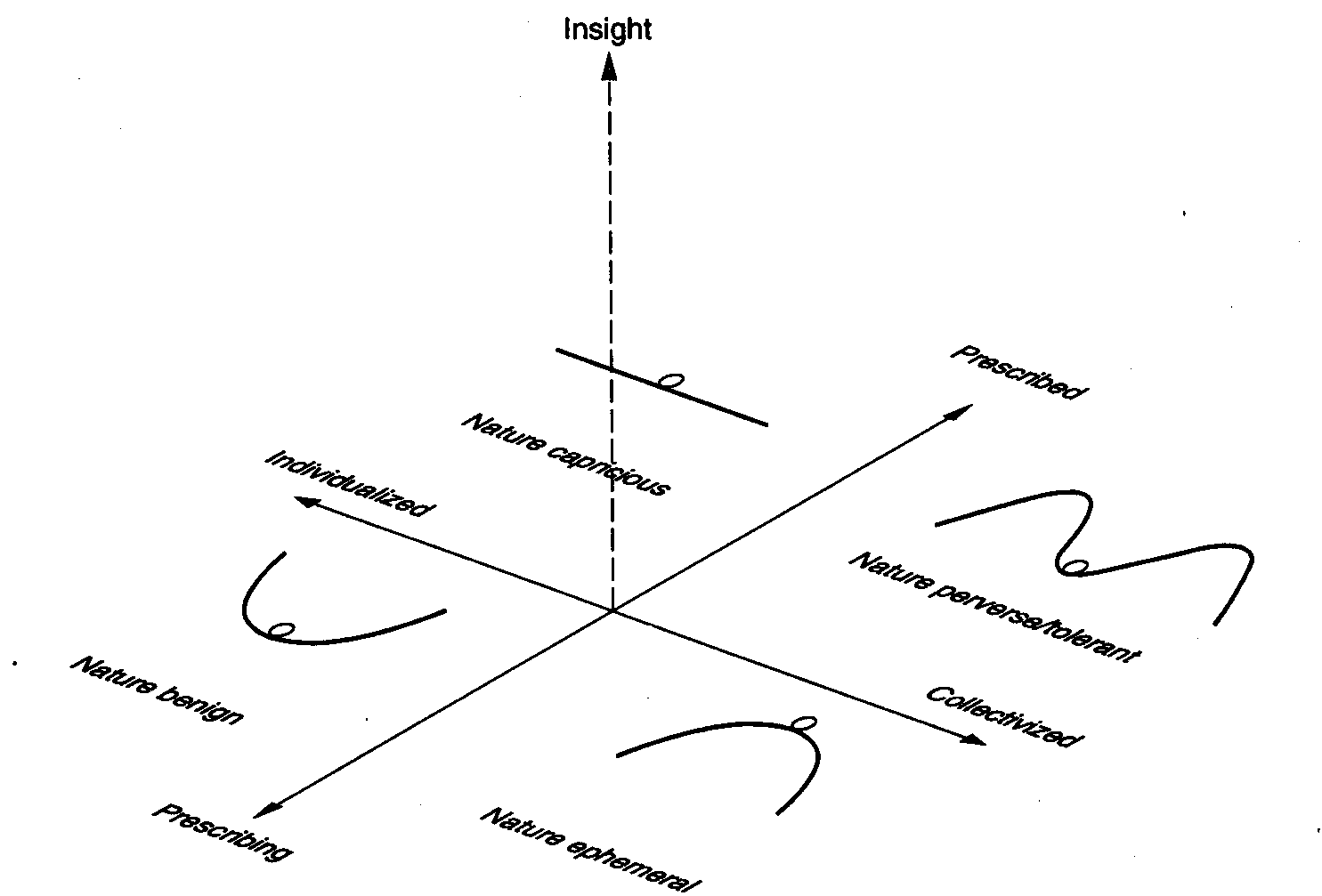 And the individualists who were still cheerfully eating (now cheaper) meat accused the environmentalists of scare mongering on the back of the Government’s ineptitude. With its proposed reforms to the Mental Health Act the Government has forged a mistrustful opposition alliance between individualists (antagonised by the threat to civil liberties) and egalitarians (who resent its stigmatising of a vulnerable part of the population). Debates about risk are debates about the future and the extent to which it can be shaped by human intervention. What would we like that shape to be? How can we achieve it? Such debates are interminable. But the harder all those involved strive to ascend the insight axis, the more civilised and constructive they are likely to be. Figure 8 illustrates this objective. How it might be achieved I know not. Perhaps the psychopharmacologists could devise something to put in the water? Figure 8 The insightful fatalist
The insightful individualist
The insightful hierarchist
The insightful egalitarian
Department of Health. Metnal Health Bill: consultation document. CM 5538 - III. 6-25-2002. Ref Type: Unenacted Bill/Resolution Home Office and Department of Health 1999, Managing Dangerous People with Severe Personality Disorder: proposals for policy development. Home Office and Department of Health. Reforming the Mental Health Act: Part II High Risk Patients. 2002. Ref Type: Unenacted Bill/Resolution Marris, C., Langford, I., & O'Riordan, T. 1996, Integrating sociological and psychological approaches to public perceptions of environmental risks: detailed results from a questionnaire survey, Centre for Social and Economic Research on the Global Environment, University of East Anglia, CSERGE Working Paper GEC 96-07. Ridley, M. 1997, The Origins of Virtue Penguin, London.